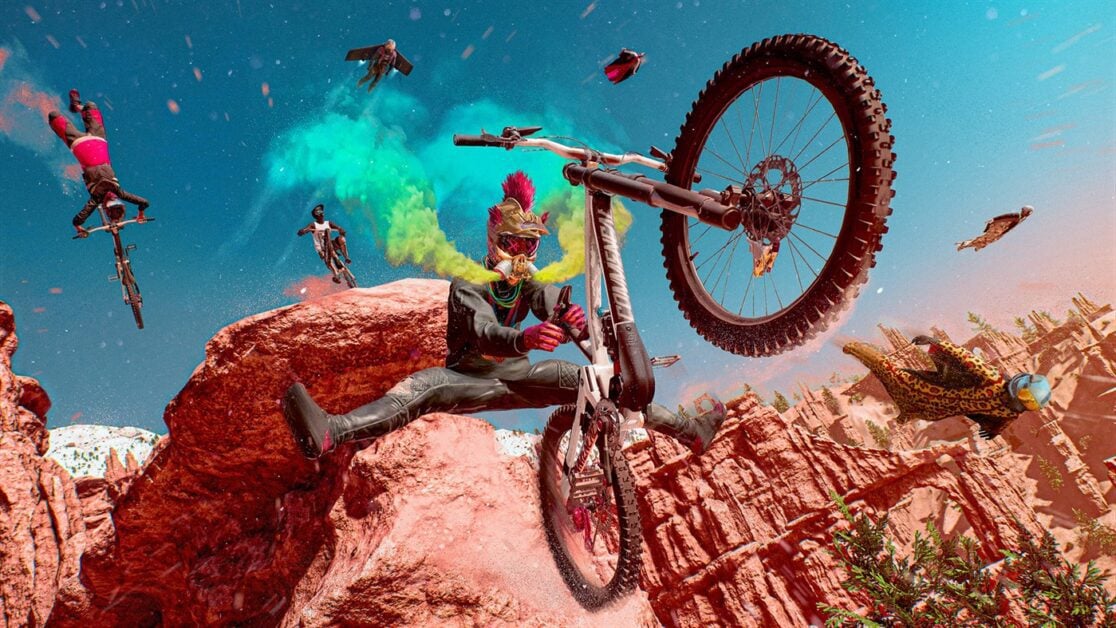 Riders Republic is the latest extreme sports game from the Ubisoft Annecy studio. You might remember that team as the one that worked on Steep a few years back.

Since then, the team has expanded its extreme sport horizons from just snow sports to everything else under the sun. There’s downhill mountain biking, road biking, rock wings, wingsuits, and far more than I can mention. Basically, if you’ve seen a lunatic wearing Red Bull branded attire try it on YouTube, you can probably do the same in Riders Republic.

In a game that’s so ambitious with how far it spreads its arms, you’d be forgiven for thinking that it must be a jack of all trades but a master of none. Thankfully, that’s far from the case. Riders Republic breathes joy into every aspect of its gameplay loop. It rewards players at every turn and reminds them of the fundamental reason as to why we play games – for fun.

After a brief introduction to the game’s basic mechanics, you’re flung into the vast open world that makes up Riders Republic. It’s a ridiculously large plane that stitches together environments from the USA’s most popular national parks. The lush green expanses of the Yosemite Valley effortlessly crash into the neon orange rocks of Bryce Canyon. All of this can be perceived from way up high on Mammoth Mountain, a snowy wonderland for the snow sports fans among us.

It’s within this world that all of the game’s events take place. New icons regularly populate the world map, each completed event seemingly unlocking a plethora of others. Riders Republic makes the act of starting these events a joy. Selecting one doesn’t bring up a menu system – instead, it quickly travels you to a nearby location and asks you to traverse at least some of the way. I was convinced this would get frustrating after a while, but the freeing nature of the traversal systems in Riders Republic only give me a greater appreciation for the world it hosts.

Partaking in that short bike or ski ride from the spawn point to the starting line lets you see the world from your own angle. As hundreds of other riders swarm around you, it feels like a playground that’s truly alive with like minded players. For an expansive map that stretches as far as the eye can see, it’s the least lonely open world I’ve ever experienced. Oh, and did I mention that you can fly anywhere of your own free will? Once you unlock the rocket wing, you’re free to zoom about the place like Superman. There’s few other games that grant this level of freedom, and Riders Republic is miles better for it.

Your game, your way

I found that once I found a sport that I enjoyed, I tended to stick with it for most of the game. For me, the two sports I enjoyed the most were downhill cycling and rocket wing races. These fast paced, race focused events let you cover much of the world quite quickly, and mastering each of the course’s challenges becomes instantly addictive.

Each event has a sliding difficulty that can be adjusted to your liking. Cranking the difficulty up results in increased XP rewards and can also be tied to challenges. These can range from finishing first to completing certain tricks or collecting balloons around the circuit. There’s a seemingly endless amount of events to take part in, but I often found myself trying the same ones over and over again to earn the maximum amount of stars.

Even if you somehow manage to complete all of the events available in Riders Republic, there’s a community feature that lets you create your own challenges. These can easily be found in the Riders Republic menu systems and expand the amount of available content infinitely. A public voting system pushes most popular events to the top, so there’s already a few on there that are far from duds.

Another area where Riders Republic excels is in its accessibility options. Especially when it comes to the tricks department, the game can be tricky to get a handle on for newcomers. An automatic landing mode helps out greatly in this department, keeping the game fun no matter your ability level. A plethora of default control options and fully remappable buttons also assists players in letting them play their own way.

Drown out the cringe

There’s another area of Riders Republic that I’d recommend you adjust to your own liking, but it’s to the game’s detriment. Much of the game is dressed in some of the most cringeworthy writing that I’ve seen in a recent game. All of the characters that you interact with use bro-style language that is enough to make anyone’s hair stand on end. They’re the sort of people who would tell you all about how they went to Burning Man on their gap year.

That extends to the choice of music for the OST, too. There’s a couple of radio stations to help hone your taste in music, but beyond some tracks from Green Day and Vitalic, it’s a relatively poor offering.

However, there’s an incredibly easy fix that makes Riders Republic far more enjoyable. The story delivered by the character dialogue isn’t important in the slightest, and you can disable the music entirely in the menus. I recommend doing this from the get-go and just throw your own tunes on in the background. Most of my playtime was done to the backing track of my running playlist or one of several podcasts. Barreling down a mountainside to a track that you know easily gets your adrenaline flowing is far more entertaining that the stock OST.

With that said, you should be sure to keep the game sound effects cranked up. The sound of crunching gravel while careering round hairpin bends has almost an ASMR quality to it. When you’re among the pack of all the other riders, constantly whirring pedal strokes sound like a swarm of bees swirling around your ears. That’s then punctuated by air flourishing around your ears as you drop distances that make your stomach gippy.

Is Riders Republic Worth Your Time?

Going into Riders Republic, I thought it was going to be the gunning down steep slopes at high velocity that would make me feel ill. It turns out that the only aspect of Riders Republic that knocks me sick is the out-of-touch presentation of the NPCs. I’m being facetious here, because Riders Republic is one of the more genuine surprises of the year. I didn’t expect to find myself trying to perfect downhill runs until 3am.

And yet, Riders Republic has completely dug its hooks into me. It imitates the unbridled feeling of freedom from the Forza Horizon games and perfects it in its own subgenre. If you’re looking for an octane-fuelled romp of a game with guaranteed fun, look no further than Riders Republic. Just be sure to bring your own jukebox.

Code was sent to GameByte by Ubisoft PR for review purposes.