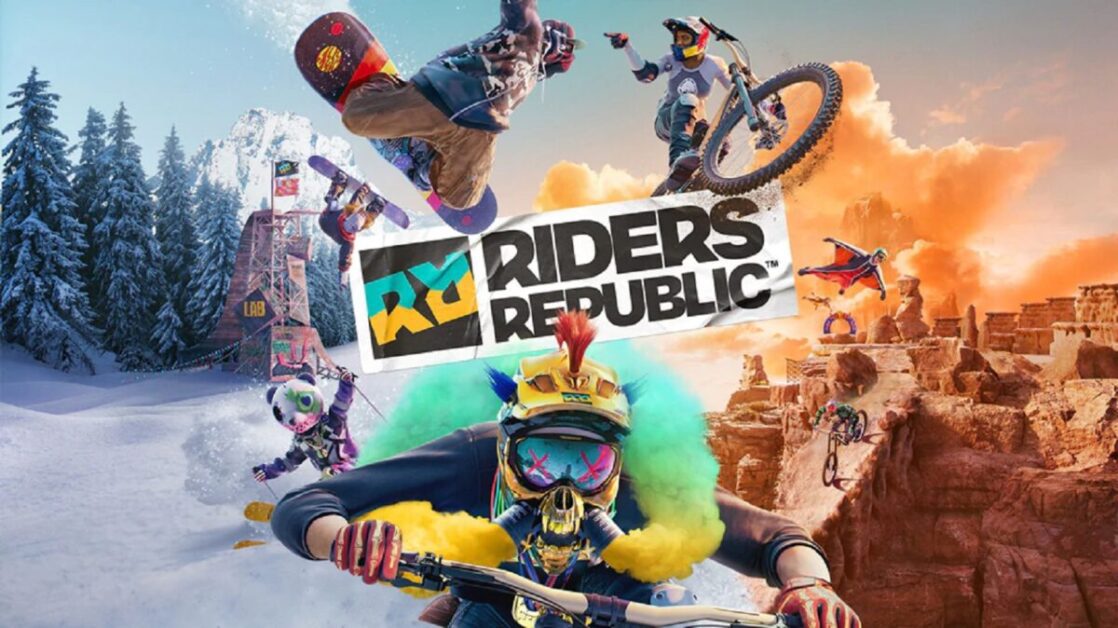 Fans of extreme sports games have seen a lot of love in recent years. The successful remaster of Tony Hawk’s Pro Skater games seems to have instilled a newfound confidence in the genre. Indie studios have done their best to give fans a taste of the adrenaline – RageSquid’s ‘Descenders’ and ‘Lonely Mountains Downhill’ from Megagon Industries are excellent offerings. Now, Ubisoft is going all-out to make the ultimate extreme sports game with Riders Republic.

After previewing Riders Republic for around five hours, it’s clear to see where Ubisoft Annecy’s priorities lie. This is a team that is passionate about extreme sports and sharing that experience with others. There’s almost every extreme sport you can think of here, including Mountain Biking, Skiing, Snowboarding, even Rocket Wings. Right from the get-go, you’re thrown into the massive open world in an exhilarating, if chaotic ride.

‘Most of our inspiration comes from the real world’

The set dressing for Riders Republic is part of what makes the game so ambitious. The team has created an eye-wateringly vast map by stitching together iconic American national parks. There’s Bryce Valley, parts of Yosemite, Canylonland, and Zion Valley all amassed into a stunningly beautiful landscape that seems to never end. All of the game’s events take place somewhere in this world, though you’re free to explore it in freestyle as much as you like.

I spoke to Boris Maniora, Associate Game Director at Ubisoft Annecy, about the team’s inspiration for Riders Republic. Interestingly, Maniora didn’t cite classic titles like SSX as his source material, but rather the views situated on their doorstep:

‘I’m currently in a meeting room at the studio and we are in Annecy in the French Alps,’ Maniora describes to me as he looks out of a nearby window. ‘We are surrounded by mountains, I have mountains everywhere looking out of the windows. So, for us, it’s natural. At Ubisoft everyone loves our nature, everyone loves to do outdoor sports. Outdoor sports are not only in video games – most of our inspiration comes from the real world.’

What makes Riders Republic stand out?

With the game genre hitting so close to home, Maniora says that Riders Republic is most certainly his dream game to work on. However, this isn’t the first time that Ubisoft Annecy has worked on a game like this. You might remember another Ubisoft game released in 2016 called ‘Steep’. This was another product of Ubisoft Annecy, themed solely around winter sports like Skiing and Snowboarding.

Following their previous work, the team knew that they’d have to do something different to make Riders Republic really stand out from the crowd. Maniora reckons that they’ve done that by striking a ‘modern formula’: ‘It’s fully seamless, it’s fully open world, and you can free-roam everywhere.

‘If you just want to spend your time chilling with your friends in the snowy part or the more dry part of the map, you’re totally free to do it.’

That sense of freedom is tangible when you spawn into the game. Loading up the abnormally large world map gives you a birds eye view of the entire park. A fog of war uncovers the map as you explore it, constantly revealing new activities to do and places to explore. There’s even a multitude of collectibles to find, including several hundred balloons and a variety of natural beauty spots.

A neat touch in the map view is that you can see thousands of small white dots milling around the ground like ants. These are actually all players recorded by the Ubisoft servers. It instills a sense of online community and cements Riders Republic as a true extreme sports MMO. The social aspect is something that the team at Ubisoft Annecy are keen to get right.

‘From the beginning of the conception of the project, the social aspect of the game is really at the core of it,’ Maniora says. ‘There’re a lot of ways to be social in the game. Competition is part of it and so you can play private PvP on any content you find in the game. You can also be with your group of friends and just have friendly competitions.’

While it’s possible to mess around in the world on your own, playing with a group of mates is encouraged. When riding around next to your squadmates, of which you can have up to five, a blue band of light will occasionally connect between the two of you. This acts as a score multiplier, encouraging you to stick together and perform tricks alongside one another.

The more the merrier

The unique selling point of Riders Republic is the mass events that will happen once every hour. Harnessing the power of the new-gen consoles, these see upwards of 50 players participate in three rounds of intense races, spanning several different sports. These mass events are one of the features that Maniora is most proud of, although it was certainly the most challenging to get right: ‘What was really important for us, and what was a real challenge, was to make all the sports fit into the same game engine. We had to make sure that you can switch from one sport to another really easily.’

Participating in a mass race is certainly the highlight of my time with Riders Republic so far. One race that I participated in saw me begin on a downhill mountain bike before swiftly switching over to rocket powered skis. After briskly clipping several tree branches, I was then launched into the skies to finish the race using a jet powered wing. It encapsulates much of what Riders Republic has to offer – a chaotic frenzy with a gorgeous backdrop.

‘Generosity is at the core of Riders Republic’

Of course, the last 18 months have shown us all how important social interaction can be. Playing games with friends without the pandemic has proven to be a lifeline for many. ‘Keeping it fun’ is a mantra that Maniora thinks epitomises what Riders Republic is all about: ‘That’s really the spirit of Riders Republic. We want to have fun when you play, to have that joyful, kind of wacky fun.’

Part of what makes Riders Republic so fun to play is that you’re constantly rewarded for everything that you do. There really is no wrong way to play when even the goofiest of actions is earning you points or unlocking new content. ‘Generosity is at the core of Riders Republic. If you want to do competitions, there’s a system for that, but not all players want to always be in competition – sometimes you just want to be able to chill. Rewarding players for every type of action, that’s something that is important for us,’ explains Maniora.

‘Accessibility is key for us’

The work that the team has put in is clear to see, even in the preview build that I played. The very first boot screen that appears is an accessibility menu, narrated by text-to-speech that’s enabled by default. In addition to this, every single one of the controls in Riders Republic can be remapped. That goes for every sport separately, so you can truly customise your gameplay experience to one that suits you best. Automatic landing modes make it much easier to pull off epic stunts, too. However, enabling this feature will affect your score multiplier.

‘This is just the beginning’

After several delays, Riders Republic is finally set to release on October 28th. While there will no doubt be plenty of exhilarating content to experience on launch day, Maniora tells me that this is just the beginning for what the team has planned. He wasn’t ready to divulge any specific details of the Year One content plan, but it sounds like the team has some interesting ideas cooking.

I asked whether there were any cool ideas that didn’t make it into the final game. Maniora replied: ‘It’s the classic way of doing video games. There is always really cool stuff that you think of in the moment.

‘The game will be released on the 28th of October, but it’s just the beginning of it. Every crazy idea we’ve had at a time, I’m sure they will come back.’

To close out our conversation, I asked if Maniora could sum up Riders Republic in just three words. He chose ‘chaotic’, ‘joyful’, and ‘social’. From everything I’ve played so far, I’d have to agree. Riders Republic appears to be putting fun with friends at the core of its experience. Given the state of the world in the last year, it feels like it’s arriving at the perfect time.

What do you think of Riders Republic so far? Let us know across our social channels.