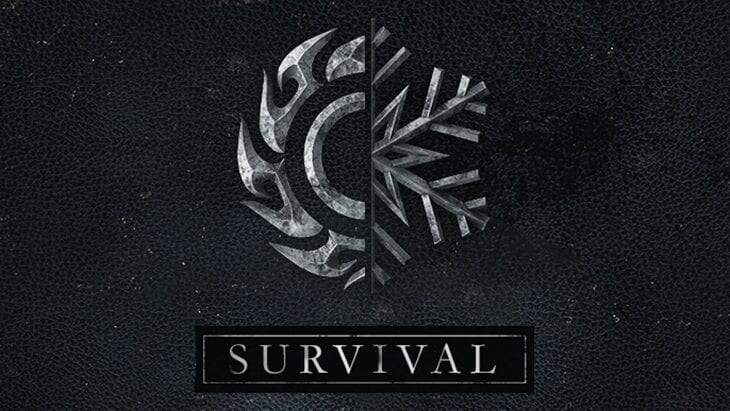 Skyrim is already pretty much all about survival. Most of the time we don’t spend rescuing or destroying the lands (hey we’ve had bad days) we spend trying not to get punted into oblivion by a giant with an attitude.
That wasn’t a covert joke about Oblivion being better than Skyrim by the way.
Anyway, as if that wasn’t enough, Skyrim is getting a proper survival mode soon. Late last year, Bethesda announced the plan, and now we’ve given it a try. So, what do we know? 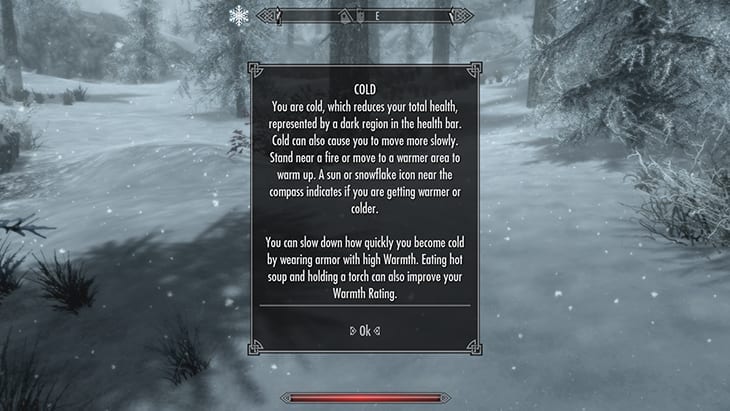 In this mode, fast travel will be disabled altogether, and the only way to get anywhere at all will be on foot or horseback. That’s pretty standard, and so is the new rules regarding food and drink – instead of gobbling down a wheel of cheese mid-battle, you will now have to ration and conserve both food and drink to get by, as both (as well as sleep) will become essential. Your carrying capacity is also decreased a lot – in other words, no more hoarding. We know. It hurt us too.

If you haven’t played in a while, don’t worry – the new survival mode is an optional addition, and if you don’t like it you can keep playing just as you have been doing so far. In fact, although it didn’t get too much publicity, the mode was opt-in on Steam for quite a while, and was later added to the Creations on both PS4 and Xbox One. 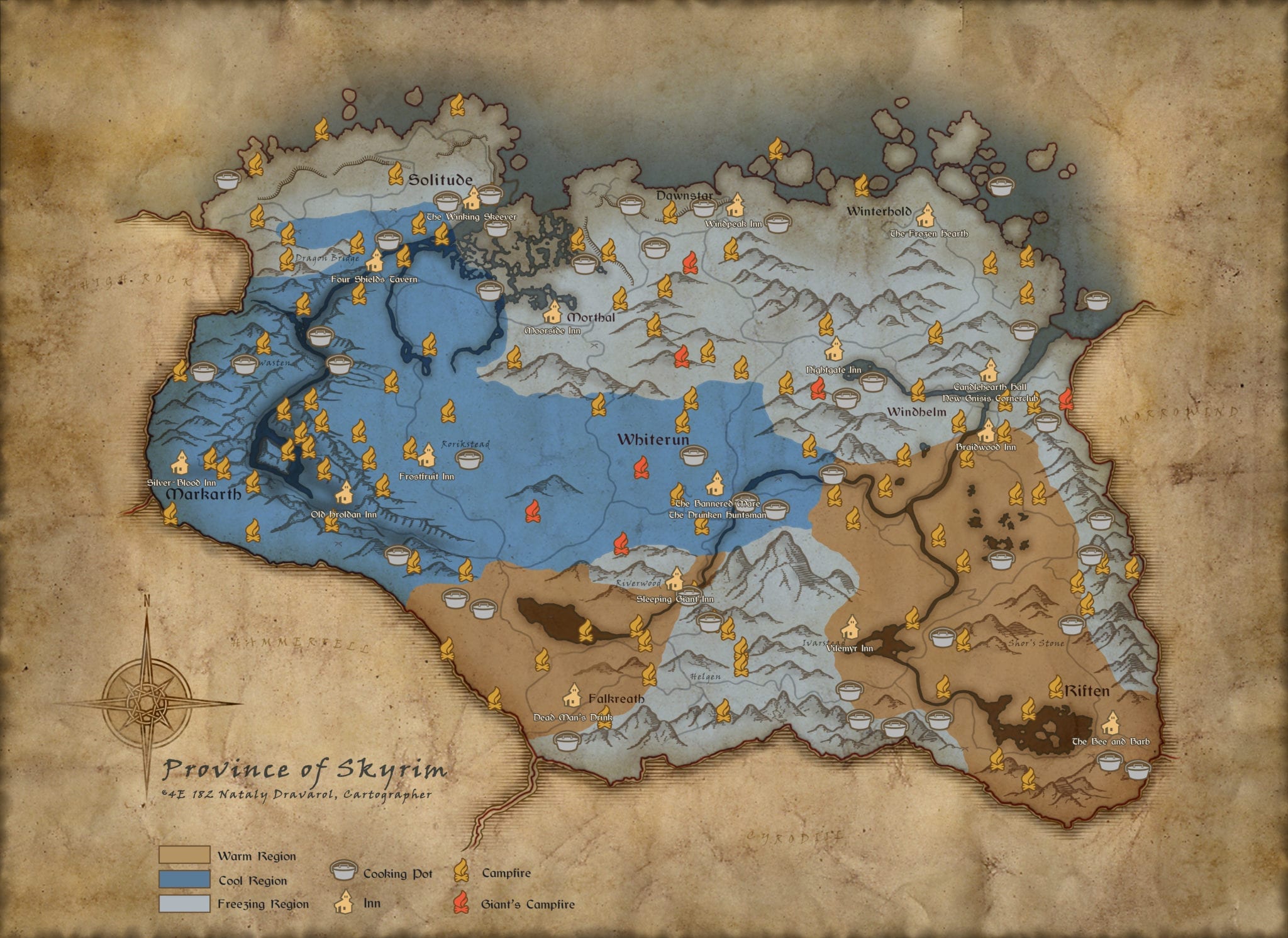 Compared to a regular game of Skyrim, survival mode is a lot more difficult. Not Dark Souls difficult, but if you’re used to breezing through the lands and exploring for days on end, you may have some trouble with this mode. Not only because of the realistic-ish stat decay, but also because, when you are forced to devote your time to collecting wheels of cheese, you can spend a lot less time on whacking bandits.

People have been complaining about it since before it was released

This is probably only news to you if you are either incredibly naïve or new to the Internet. If it’s the former: Awww. If it’s the latter: Poor you. Welcome to hell. If you’re already accustomed to the way that people act on the net, it will come as no surprise that this new mode has been, shall we say, heavily criticised.
Why? For everything from being too easy to being too late – yes it has been a couple years since Skyrim came out, but for most of us it’s a positive that Bethesda is still actively working on their creation. Some people just refuse to be happy.

The map will change

Skyrim’s map is already pretty amazing – yes, you’re probably using a mod to show the roads, but that aside, the map is live so to speak – it accurately relays weather and big events – if you look at the map while swallowing a dragon’s soul, you’ll see that on the map (wherever you are) a bright lit up dot appears to show the bright light of the soul. That’s already pretty neat, but for this game mode, an alternative map was made.
This one features different climate zones (all of which are variations of terrible winter, this is Skyrim not the Care Bears) and landmarks to help you orient yourself.

The whole thing is very in-depth

While you probably weren’t surprised to hear that hunger and thirst feature in the game, you may be a little surprised at the care that Bethesda put into their new game mode. Things like swimming in one of the icy cold rivers are a good way of getting cold and dead quickly, as are the newly added diseases. The old ones that were already in the game have become more aggressive, and new ones like Food Poisoning also threaten your life. Food Poisoning in particular can be quite annoying, as it will pop up after you’ve had uncooked food.
In other words, Skyrim will finally do what university life probably didn’t manage – it’ll force you to cook to feed yourself.

The setup is similar to the Long Dark 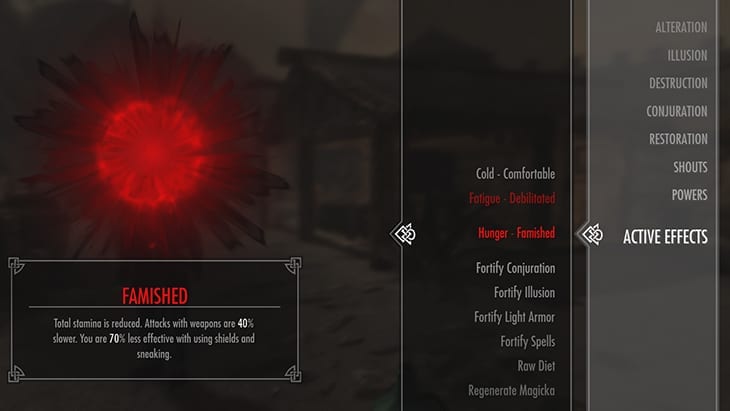 With warmth and cold settings, no health recovery (outside of potions) and the requirement to sleep in a bed every now and again, you will find the game to be rather reminiscent of other survival titles like the Long Dark. While the idea of a (sort-of) crossover of the two may seem weird at first, Skyrim’s snowy plains are actually perfect for it – surviving hunger and battling the elements just isn’t any fun if done on a tropical island.

The perks you get from things like standing stones have changed a fair bit – the Carrying Stone now only gives 50 weight bonus instead of 100. Similarly, shrines are now no longer free to use, but instead cost – capitalism at its finest.
If you want to brave the world with a pelt or pointy teeth, you’ll be in for a surprise too – while you can certainly do so, the two races immunities have diminished quite a bit and you’ll have less of an advantage playing as either race. What’s cool about them though: No matter which one you favour, both can sort out their hunger by feeding on killed victims. Although gross, that’s a pretty neat thing to be able to do – and one we notably missed in the main game.