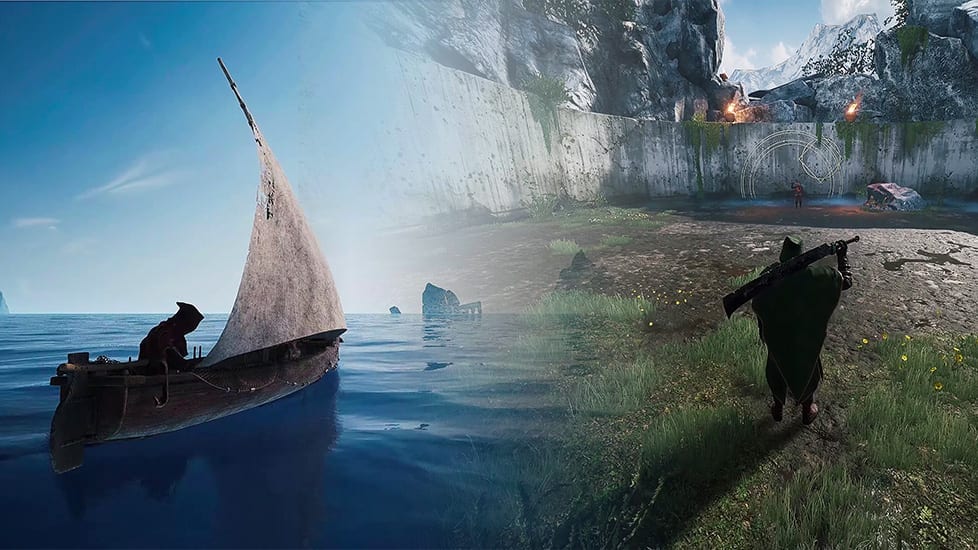 Indie games are only limited by your imagination, and while many developers seek to create out-of-the-box titles, there are also those who recognise the best of AAA games and look to put their own spin on the greats. The latter of these is where Song of the Tides comes in, an indie game inspired by the likes of Dark Souls, The Witcher and even Dead Cells.

Caught your interest? It’s not surprising as Song of the Tides definitely got my attention.

Song of the Tides is “a Roguelike-Soulslike in a psychedelic fantasy setting for up to four players and made in Unreal Engine 4,” founder & Game Director at RFR-Interactive, Tinko Wiezorrek, tells me. “Abandoned by fate you embark on a journey with no return, to unravel the mystery of the Shifting Isles. Become a mercenary, master the challenging arts of combat, grow in power, make allies and embark into a new adventure. With the winds as your guide you might just discover your destiny… if you can overcome its guardians.”

At first glance the game gives off automatic Soulsborne and even Assassin’s Creed vibes, but I also wanted to know what other titles have inspired its combat, style and design.

“Our main inspiration is of course the OG Dark Souls, but we also gathered a lot of inspiration from Roguelikes like Enter the Gungeon, Dead Cells and Risk of Rain 2,” says Wiezorrek.

“Regarding the lore of the game we drew a lot of inspiration from Game of Thrones, The Witcher, The Fountain and various HP Lovecraft stories. That probably sounds like a weird mix, but we use it to craft our unique strand of what we call ‘psychedelic fantasy,’ which dumps the classic fantasy tropes of power struggles for a more personal story about character relations, motivations and their search for meaning in a senseless world.”

A small indie developer based in Frankfurt, RFR-Interactive is working hard on Song of the Tides, despite its size. The team is currently sharing updates on the game’s development over on Twitter, with developer vlogs posted to YouTube every few weeks.

“We are currently hard at work on the game as well as securing funding for its production, depending on how that side of the business develops it might take a bit longer until we can publish a demo. If you can’t wait for the game’s release and want to follow its development in real-time, keep a look out for our YouTube updates,” says Wiezorrek.

“Right now the best way of supporting us is through sharing our content with your friends. We are also working on setting up a Discord to give everyone a place to gather and talk about the game.”

Song of the Tides is aiming to come to PC, Xbox Series X and PlayStation 5, with an estimated release window of 2022. Follow the game on Twitter here and YouTube here!

UPDATED March 2021: Song of the Tides is now available to wishlist on Steam!