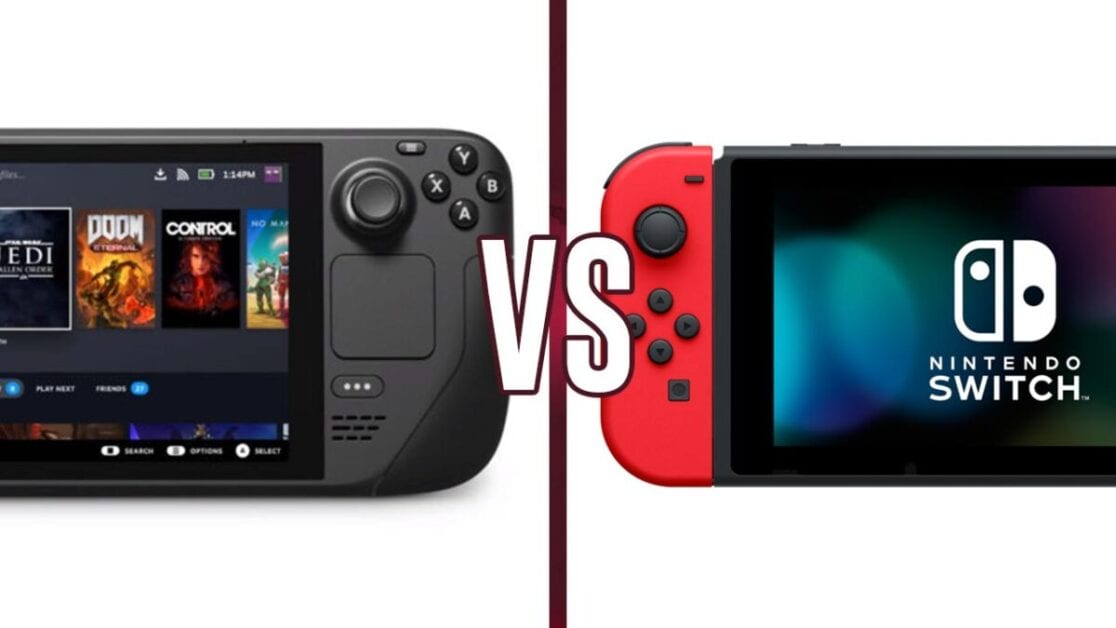 When Valve announced the Steam Deck last night, the comparisons to Nintendo Switch console were immediate. With a centred 7” screen flanked by a myriad of controls, the portable PC has surely taken inspiration from a little-known Japanese video game company.

Although the units look similar on the surface, they actually couldn’t be any different from each other. Here’s how the Steam Deck stacks up against the Nintendo Switch.

Let’s start with the internals as that’s the biggest area that differentiates the Steam Deck from the Nintendo Switch.

The Steam Deck sports a PC based set of internal components. Valve has worked with AMD to create a custom APU that’s based on the RDNA 2 graphics architecture. In layman’s terms, that means that it’s about as powerful as a PS4 or Xbox One. It’s a mighty amount of power to have in your pocket, especially when compared to the Nintendo Switch.

In comparison, the Nintendo Switch is built around a custom Nvidia Tegra processing unit. While still powerful, it’s starting to show its age from 2017 with few games running at a native 60 frames per second.

Those powerful internal specs won’t have much trouble pushing the 720p screen that’s plastered to the front of the Steam Deck. It actually sports a resolution of 1280×800, which is a 16:10 aspect ratio but effectively 720p. That’s roughly the same resolution as the Nintendo Switch.

Don’t fret too much if 720p sounds like a resolution of the past. At 7” diagonally, 720p allows for a pixel density of 215 pixels per inch. At normal viewing angles, you’re unlikely to notice the lower resolution.

The Steam Deck display is an LCD panel which is the same technology seen in the original Nintendo Switch and Nintendo Switch Lite. Meanwhile, the new Nintendo Switch OLED model will sport a screen that’s brighter and more vibrant than the Steam Deck’s. The most expensive Steam Deck model comes equipped with an anti-glare coating. That’ll be especially useful if you plan to play much of your Steam Deck outside.

Just like the Nintendo Switch, the Steam Deck screen is touchscreen. It can be used to navigate the Steam OS menus or be used as a mouse pointer in games that don’t work well with a controller.

The question on everybody’s mind when it comes to a handheld device – how long is the battery going to last? The answer to that question ultimately depends on what sort of games you play and what graphics settings you run with.

Here’s how Valve explained it to IGN: ‘It’s about 2-8 hours depending on what you’re doing. You can play Portal 2 for 4 hours on this thing. If you limit it to 30fps then you’re going to be playing for 5-6 hours.’

With the Steam Deck working just like a PC, you can adjust all of the usual graphics options that you would if you were sat at a desktop. Just like lowering the brightness to extend the battery life of your phone, you can turn down the visual effects in a game to make the battery life last longer.

In comparison to the Switch, the Steam Deck has several more control options. To the sides of the screen are a familiar set of thumbsticks, ABXY buttons, and a D-pad. They’re laid out in a linear fashion as opposed to offset, though Valve assure that they’re more comfortable to handle than they look.

Beneath the two thumbsticks are a pair of trackpads. You’ll recognise these if you’ve used the HTC Vive controllers, or Valve’s ill-fated Steam Controller from a few years ago. They’re not intended to be primary inputs, but will give you a little extra precision in games that don’t play well with a controller.

On the back are four programmable buttons akin to what you’ll find on an Xbox Elite Controller. You can program these to any input you like using Valve’s native button remapping software within Steam OS.

In comparison to the Switch, that’s a lot more inputs compared to the traditional layout. The Switch has the edge in that the controllers can slide off when placed into the dock, however. The Steam Deck has its controls firmly fused to the unit.

Here’s perhaps the most important question of them all – what games can you run on the Steam Deck. The answer to this is almost anything. Well, anything that will run on a PC.

Out of the box, you can log in to your Steam account where you can access your entire steam library. Using cloud saves, you can download any of your games and pick up right from where you left off.

It doesn’t end there, though. As the Steam Deck is essentially a PC, you can install whatever you like. Valve says that it’s possible to install games from other PC services, like the Epic Games Store or the Microsoft Store to the Steam Deck. If you’re a PC player who already owns plenty of games on PC, you’ll be able to pick them up seamlessly on the Steam Deck.

It’s a far cry from what Nintendo allows you to play on the Switch. You’re locked into playing whichever games are available on the Nintendo ecosystem. There’s no real way to load up anything on a Switch that’s not on a cartridge or available on the eShop.

Given the (usually) much cheaper price of games on PC, the Steam Deck looks like it might have the edge over the Switch for those looking for a pocket indie machine.

As the Steam Deck functions just like a PC, there’s no end to the connectivity of this unit. It has built in Bluetooth and it’s not limited to licenced peripherals like the Nintendo Switch is. That means any Bluetooth accessories you already own will work with the Deck.

Everything from Apple Air Pods to even a DualSense controller can be connected up using a native Bluetooth connection. It’s an area where the Nintendo Switch falls down massively.

However, the Nintendo Switch does come with a docking station included in the box, which the Steam Deck doesn’t. Valve is working to develop its own docking station for the deck, but they can’t confirm pricing yet or when it will be available.

However, the Deck will work with any USB C dock already on the market. Taking a quick look at Amazon, there are plenty of options already out that can provide the Deck with an HDMI output, USB inputs, and Ethernet capabilities.

Finally, let’s talk storage. There are three options when reserving a Steam Deck. 64GB is the base model for £349. At this level, the storage is eMMC based, which is fast – just not as fast as NVMe drives.

The 256GB and 512GB models cost £459 and £569 respectively. These models use NVMe storage for ultimate storage speed. All of the models contain the same internal power components, so they’ll all run games at the same frame rates.

Whichever model you go for, there’s a micro SD card slot on the bottom that can expand the storage to whatever capacity you like. That’s an essential feature that’s also seen on the Nintendo Switch. With the Switch sporting only a 32GB storage size, most people are usually required to upgrade its storage after the fact.

How do you think the Steam Deck stacks up against the Nintendo Switch? Let us know across our social channels.