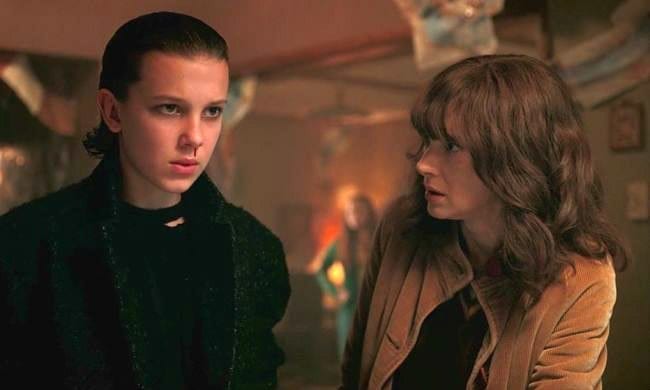 Netflix has been busy raising the eyebrows of fans everywhere, as the streaming service teases a devastating update on where we’re up to with Stranger Things Season 4. Up there with Rick and Morty‘s achingly long delay between seasons, Matt and Ross Duffer aren’t exactly known for rattling out new episodes of Stranger Things in a hurry.

While we demand to know who the mysterious American is and whether Jim Hopper really was dusted in the Battle of Starcourt Mall, it sounds like Stranger Things Season 4 is still a long way off!

According to TVLine, Stranger Things will follow in the footsteps of Season 3 and return for another run of just eight episodes (hardly long enough in our eyes). The big kicker comes that the sci-fi giant WON’T be back next summer like some sources suggested. Although Netflix is yet to confirm this as gospel, the site claims Season 4 won’t start shooting until January 2020 and should wrap in August.

The latest reports debunk recent teases that Season 4 has already started shooting. That being said, there are hints of a return to Hawkins on the horizon. Someone close to the Stranger Things set in Georgia recently claimed filming was underway.

Redditor u/ChihuahuawithBoombox posted a covert snap of some sets. The redditor shared a series of photos under the caption “Filming has begun in Rome, Georgia.” They captured a fair few images before being “asked to leave”.

Notably, you might be able to spot Hopper’s Chevrolet K5 Blazer. While it could just be Jim’s car left behind after his Starcourt death, it’s our biggest clue yet that he’ll be back in action to patrol the streets of Hawkins.

Elsewhere, Hopper’s Blazer could indicate a flashback to a happier time pre-Starcourt. Either way, it seems strange that his signature wheels are there, especially considering Eleven and the Byers family were last seen leaving the town for pastures new.

There are plenty of lingering questions left hanging after the Season 3 finale. Surprisingly literally no one, David Harbour has already teased that Daddy Jim didn’t meet his maker last season.

It just wouldn’t be Stranger Things without the grouchy police chief, that being said, the Duffers could’ve gone full Game of Thrones on us. Importantly, Harbour hasn’t been spotted yet, and even when/if he returns, expect it to be shrouded in secrecy. Either way, you probably shouldn’t get too excited just yet, the clock seems to be ticking very slowly toward Stranger Things Season 4.