It seems Twitch is stepping on people’s morals once again thanks to one streamer who decided to keep money donated to him to gift to his viewers. 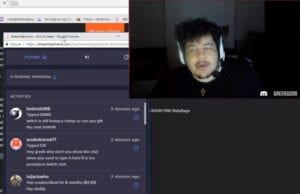 Twitch streamers are often gifted the best present in the universe – money – from their loving viewers and subscribers. Usually people donating to a streamer are helping to keep their channels alive and well and sometimes it’s to get them a pizza six hours into a stream, and sometimes it’s even more selfless.

Twitch streamer Greekgodx recently came across a selfless fan of his channel, a fan selfless enough to dole out a massive FIVE HUNDRED POUNDS (that’s over $600 USD!) for Greekgodx to be able to give out money or free subscriptions to some of his most adoring fans.

However, Greekgodx had other plans for the kind donation…

He told the stream: “Give [the donater] a Greek-out in the chat…not only has he supported me in top bits, he’s also supported me in money, donations-wise, and subs. Like, thank you mate…thank you, dude.

“Thank you so f*cking much but I’m not gifting my chat anything though. That money’s mine now. I’ve f*cking yoinked it. Sorry, chat. That’s my money now.”

Of course the chat wasn’t best pleased, flooding the stream with sad emojis having missed out on a lot of loyalty and a bit of cash.

The money, donated by a Twitch user by the name of Bokhalid99, had been sent with the message: “Twitch is still being a chimp so can you gift the chat SmileW.”

Sorry, Bokhalid99. Maybe next time donate your money to a more worthwhile cause…

Check out the clip above, and if for some reason you want to look up Greekgodx, you can check out his channel right here.

What do you think of Bokhalid99’s donation? Did Greekgodx rip them off, or was he right to keep the money? What would you do?

For more Twitch misjudgements, check out the videos below!