Yes, yes, let’s get it out of the way first – Minecraft. Minecraft won’t be on the list because it’s just to obvious. People have built some really amazing stuff in Minecraft, from functioning computers to extremely detailed replicas of entire fantasy worlds – we usually manage a 2×2 house before we lose interest, but then we usually also don’t have the patience to wait in front of the microwave while it heats our hot-pockets, so there is a reason for that.

Next to Minecraft it’s easy to forget that there are other games that give their players the freedom to build anything they can think of – and boy can people think of interesting things to make! 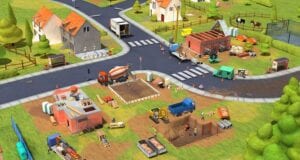 One thing that critics of Minecraft don’t like are the, pardon the pun, blocky graphics. It’s also easy to forget that there is more than one way to ‘build’ things – in Little Builders, a game primarily targeted at younger audiences, players can pick their tools, vehicles, and projects in order to build things the old-fashioned way – by operating an excavator and by hopelessly missing all reasonable deadlines as is tradition in construction work.

The game doesn’t let you build ANYTHING you want, but it does have a good variety of projects, especially given its young audience. Gameplay is simple if not easy and fun for kids and adults alike. 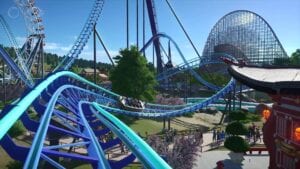 Now this game is primarily a park management type game but reducing it to that would take away its best and most spectacular element: the blueprint creator. Here, players can combine pre-existing elements (hundreds, even thousands of them) to create new decorations, coasters and even entire pre-built parks. The Community Workshop for this game is filled with the most spectacular creations, and with almost no learning curve, it’s incredibly easy to pick this up and get building practically immediately.

This game is pretty underrated when it comes to its building aspects – the sheer number of available resources that can be manipulated in just about every way imaginable allows nearly limitless creativity when it comes to designing stuff – one user has even built a gigantic replica of a messy room with an entire amusement park built into it, from a coaster under the bed to a ride on top of a desk. 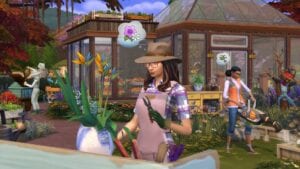 Almost as obvious as Minecraft, The Sims series has had extensive building capabilities since its very first installation. Over the years, the possibilities here have only increased. The most recent Sims game, the Sims 4 is quite popular, but many Sims aficionados actually prefer the Sims 3 because it has more options and content.

Build Mode-fans know that with the added use of cheats very little is impossible in the world of the Sims – there are plenty of fan-made mansions, castles, and other buildings to prove this! 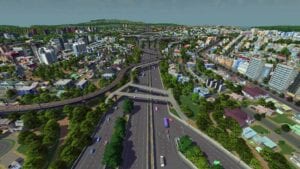 This is definitely one of the most engaging and interesting building games out there – much like in games like SimCity, players build up their own little towns and cities. CS really lets you go all out in your endeavours though – if you want to build a sustainable green city filled with parks, happy residents and solar and wind power, you can do that. If you want to build an industrial hellhole wrecked by natural disasters like floods, fires or even pollution caused by your own buildings, you can do that too – just don’t expect your residents to hang around for too long.

There are several expansion packs available that add new content as well as new functionality, so one way or another there are always new things to do to your city. As one of the more comprehensive builder-sims out there, this is a good pick for anyone who wants to play god!

This one looks and feels a little like Minecraft, but in combination with RPG elements. There is player progression, trading, communities, you can even build portals to transport you to other worlds in the space setting the game uses.

At first glance, the two do seem similar, what with both games using the same block-based type of graphics, but the two do play differently. Boundless is still pretty new and has a dedicated team of developers, so it’s not unreasonable to expect it to eventually surpass Minecraft where it comes to your ability to build outrageous projects.

Medieval Engineers and Space Engineers are two games from the same development studio, and they are usually available for cheap as a package deal. They both do essentially the same thing but in different settings – one has you building gigantic and elaborate spaceships in outer space while collecting resources and even crash-testing your ship by colliding it with a friend’s, and the other sees you building entire settlements, castles, and even medieval siege weapons like catapults.

Both games are still in early access and have new content and mechanics added somewhat regularly – both however allow you great freedom in what you want to build. Space Engineers, for example, lets you build just about any spaceship you can dream of – and with the multiplayer functionality, you can always go and abduct your friend’s ship if yours turns out to be lame!