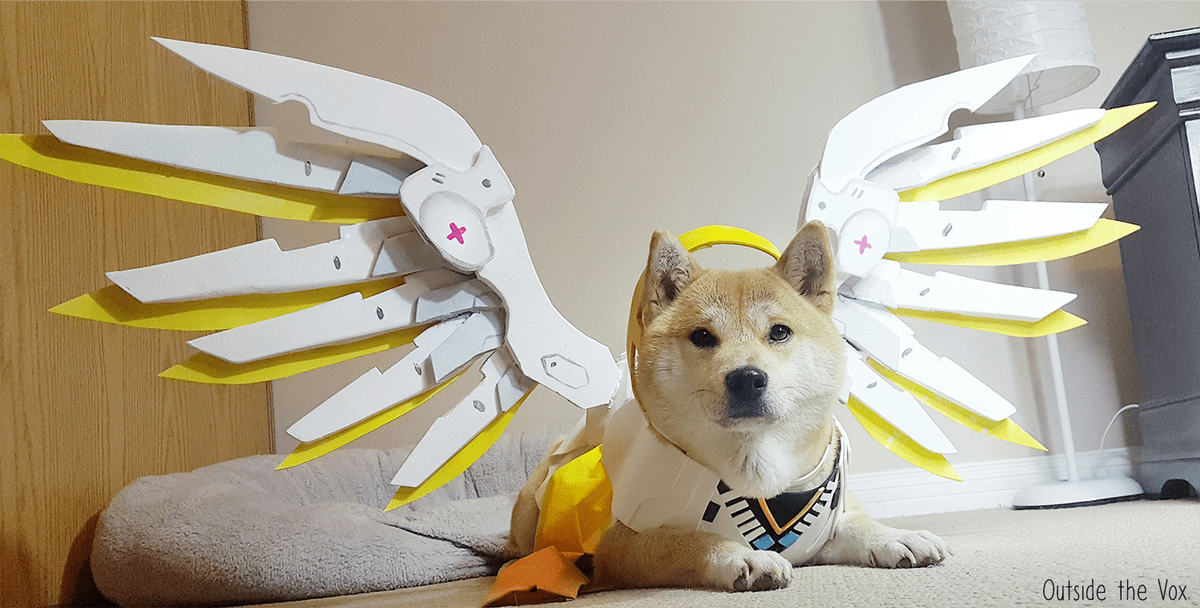 First, a disclaimer: All dogs are good. Some are good boys, some are good girls, it really doesn’t matter. All dogs are great. We can’t even say that some are better than others because there is no such thing, but like people, dogs have different skills.

One of these skills – looking ridiculously adorkable in cute outfits is what we are here to celebrate today! So, if you are having a bad day, if your boss is nagging you again or you’re just bored at work, have a look at these cosplaying puppers to cheer you up! 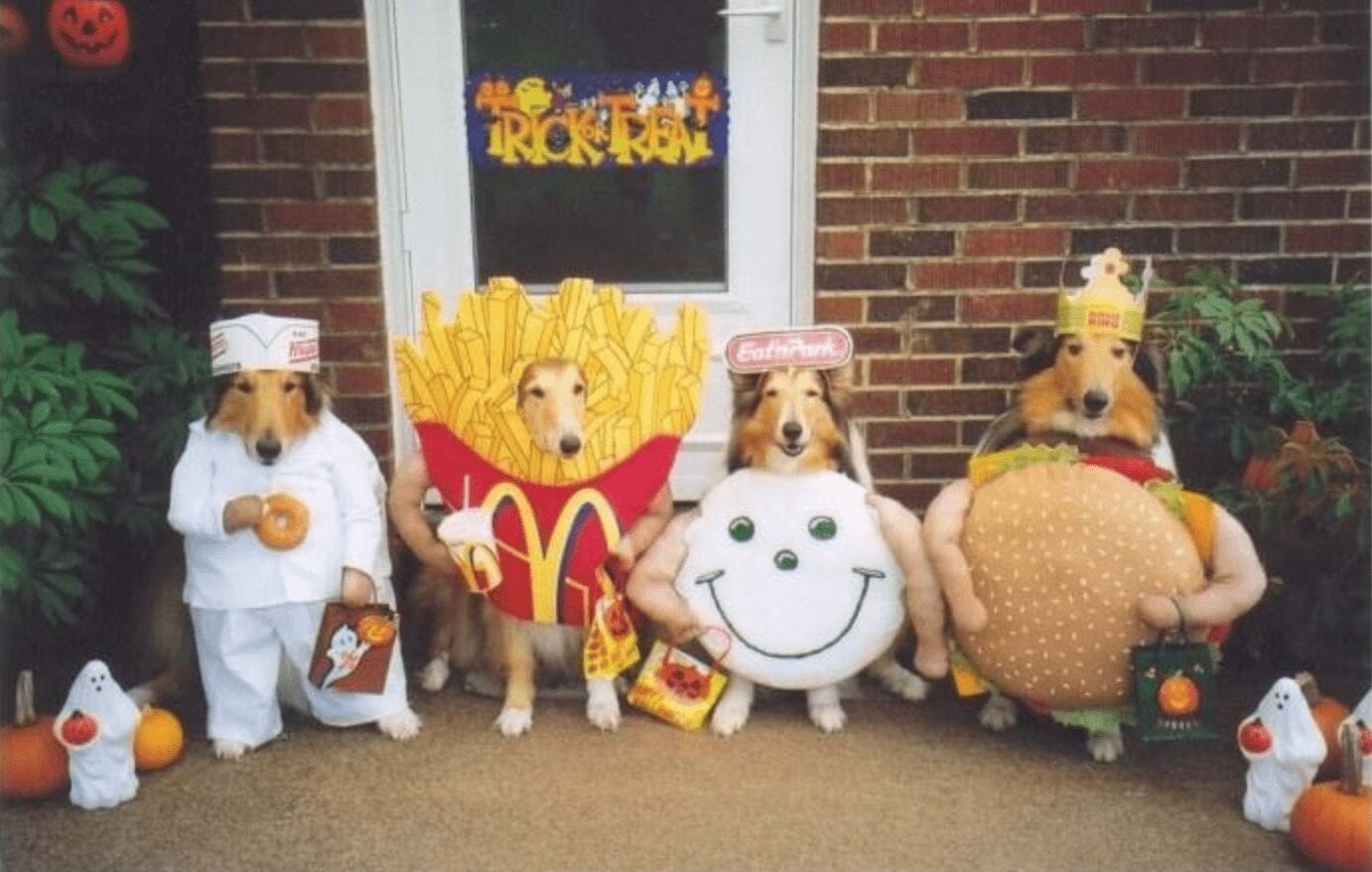 Ok ok, none of these make for particularly HEALTHY breakfasts, but we just couldn’t give up on the pun. This family of long-haired collies is looking pretty snazzy in their little outfits, especially given the arms they’ve got attached. Our favourite is the Dunkin Donuts one on the left – not that his three brothers/sisters are far behind though.

If we ever end up with a pack of dogs, this is what we will be doing to them. 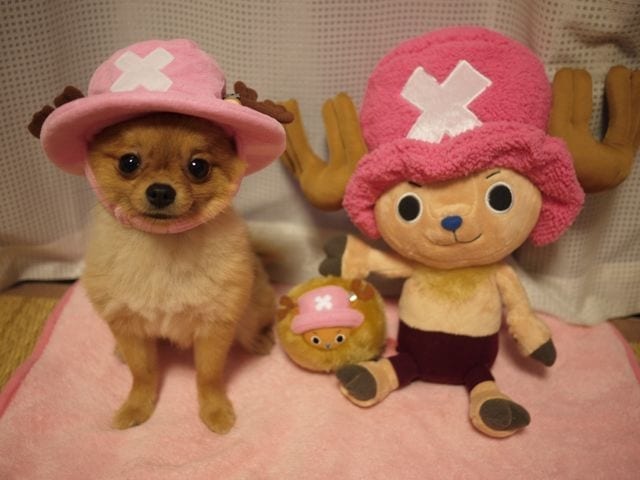 Ok, here it is a little hard to tell since there are three iterations of this little guy, but the dog in costume is the one on the left. Probably. Maybe the one in the middle, we’re not sure. It’s rare that animal cosplay is true to life-size, so it’s all the more impressive when things work out like this. From the eyes to the fur colour to the snazzy hat, these three could be triplets. We’d certainly love to adopt the left one, if only to confirm that one really is the dog. 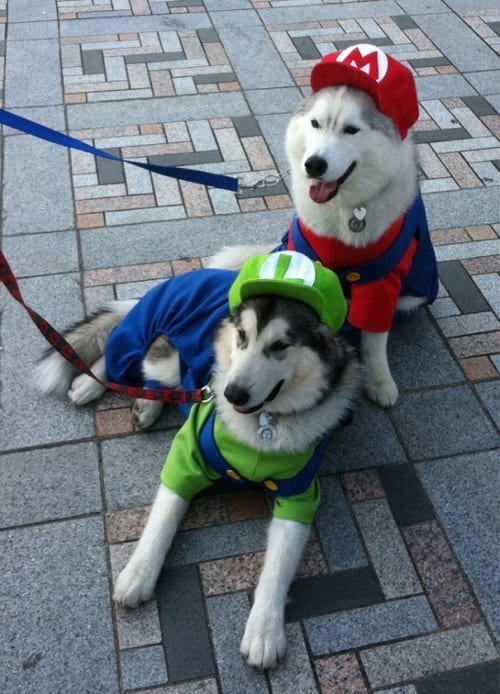 Coming up with the pun for this one was actually quite tough, but these two lovely brothers were worth it. The costumes fit perfectly. Pawigi is the thin, longer one that looks a little tired altogether, and Borkio is a little shorter and a little more…husky than his brother. He also looks like he’s totally down to search through as many castles as necessary in order to rescue the Princess. The only thing that could stop him…would be a piece of ham. 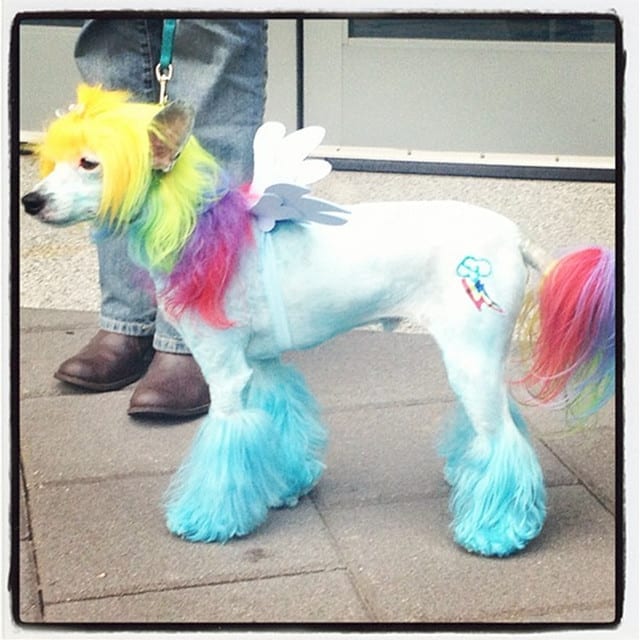 Most of the dogs on this list are cool. Their cosplay is impressive, adorable, well-made or all of the above. This dog we just feel bad for. Sure, the picture is hilarious, but the poor thing must get bullied in dog parks all the time.

Just look at his little face – if that’s not the look of “I’ve been to ‘nam”, we don’t know what is. The shaving and dyeing would be bad enough but given that the owner apparently thought the ideal costume choice would be one of the many interchangeable My Little Ponies. We’re not sure which one this one is supposed to be (maybe Rainbow-something?) but Flutterpup made for the better pun, so there you have it. 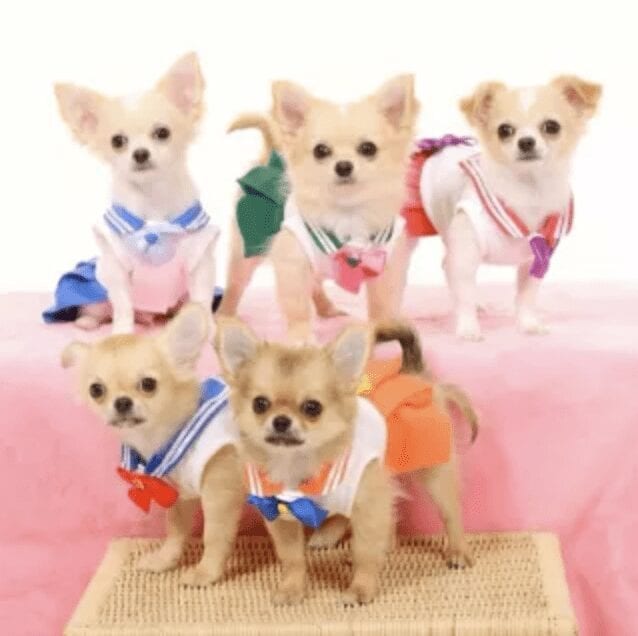 Squad Goals is a stupid, overused phrase commonly used by people with nothing better to do than to hang on Snapchat all day. Feel personally offended by that – well, wonder why. Anyway, despite that, this group here can only be called squad goals. A whole pack of little Chihuahuas in tiny adorable Sailor Moon costumes is almost too much to bear. The fact that they are posing nicely makes it all the better! 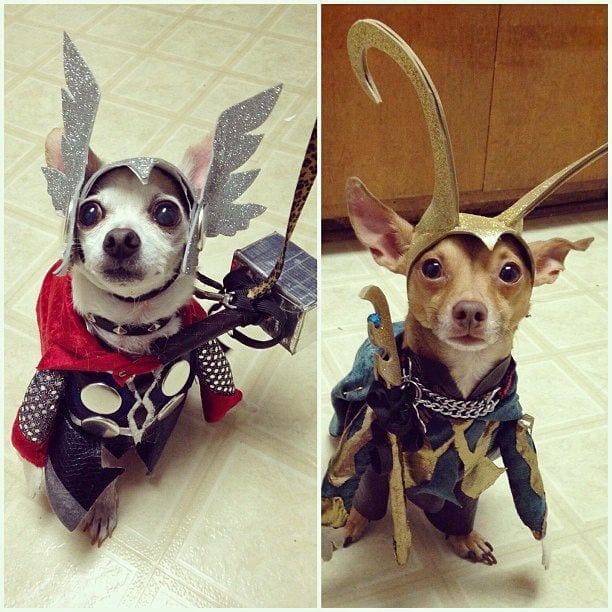 It’s pretty obvious that tiny dogs are easier (and cheaper!) to dress up. While many people can’t stand chihuahuas because they can be quite yappy, only a monster could hate these two little guys here. They even manage the colour of their respective costumes! Their owners did a great job dressing these guys up.

Also, much like in the Marvel movies, Loki-dog is FAR better-looking than his brother. If you disagree with that, YOU can tell him! 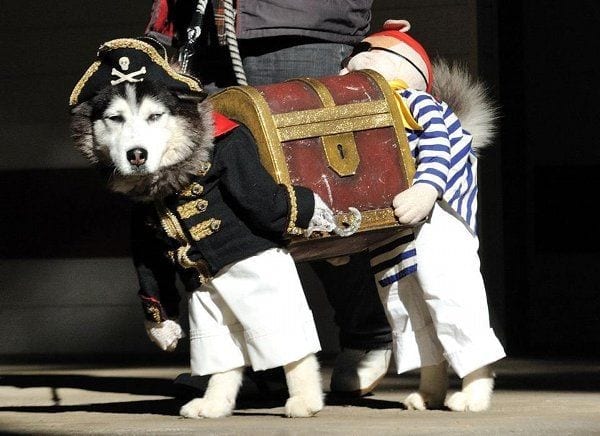 An oldie but a goodie. Outfits that make dogs look like two people carrying something should automatically become a national treasure. This pupper certainly fits the bill. Huskies don’t always love water, which could actually be a benefit – back in the oldern days, few pirates knew how to swim!

Non-swimmers were preferred as crew because it meant that in an emergency, they weren’t likely to abandon ship. Who would have thought that pirate captains didn’t trust their crew? You’d think you can trust a pirate…Well, we’d certainly trust this pawrate! 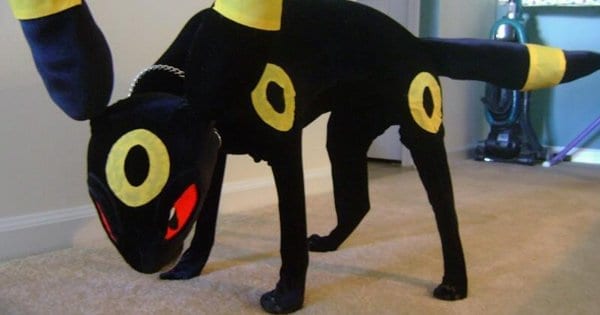 Most of the outfits here are made from a dress or coat, hat, and maybe some shoes if the dog is really unlucky or the owner is really stealthy. This is well and beyond that. This dog is wearing what is essentially a spandex bodysuit. Not many dogs would just be willing to wear that, and this one is even holding his head in a ‘realistic’ position! At first glance it even looks like the whole thing is just a stuffed toy – one thing is for sure, this is one patient dog! 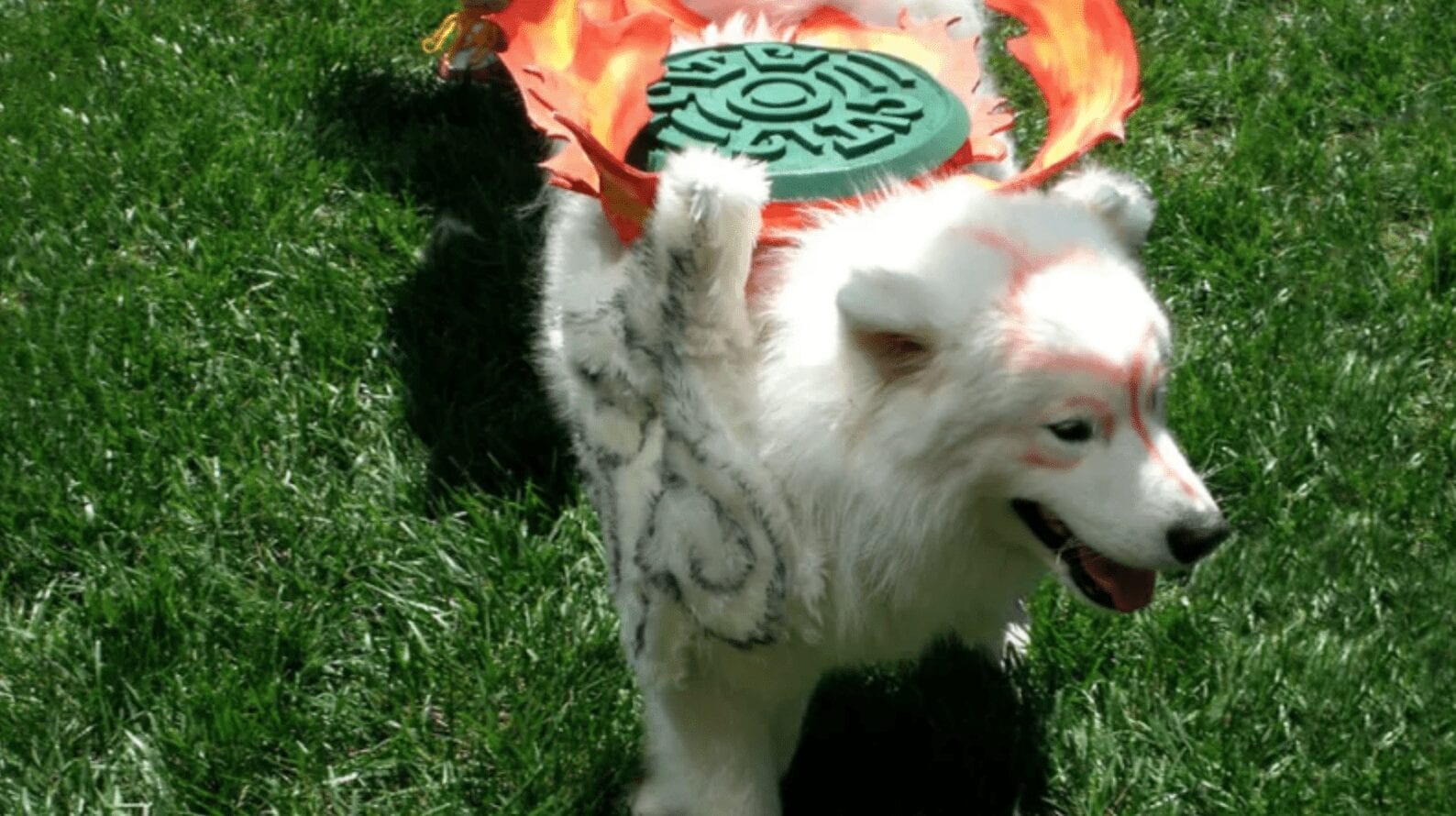 A dog cosplaying as another dog (or dog-like deity, let’s not sweat the small stuff) is pretty cool. This pupper here definitely fits the bill – he’s the perfect choice for the role of the white and painted Okami. One of the few times a long-haired white dog is perfect for anything other than shedding all over the house, the owner really made the most of this one!

This dog is cosplaying as the healer Mercy from Overwatch. It’s a pretty bold choice given that those wings are probably heavy if not at least confusing for this pup. He still keeps his cool though and just chills while his owners are taking photos of him. We’d certainly love to have this guy on our team as a healer – there’s no way he’d let us down!