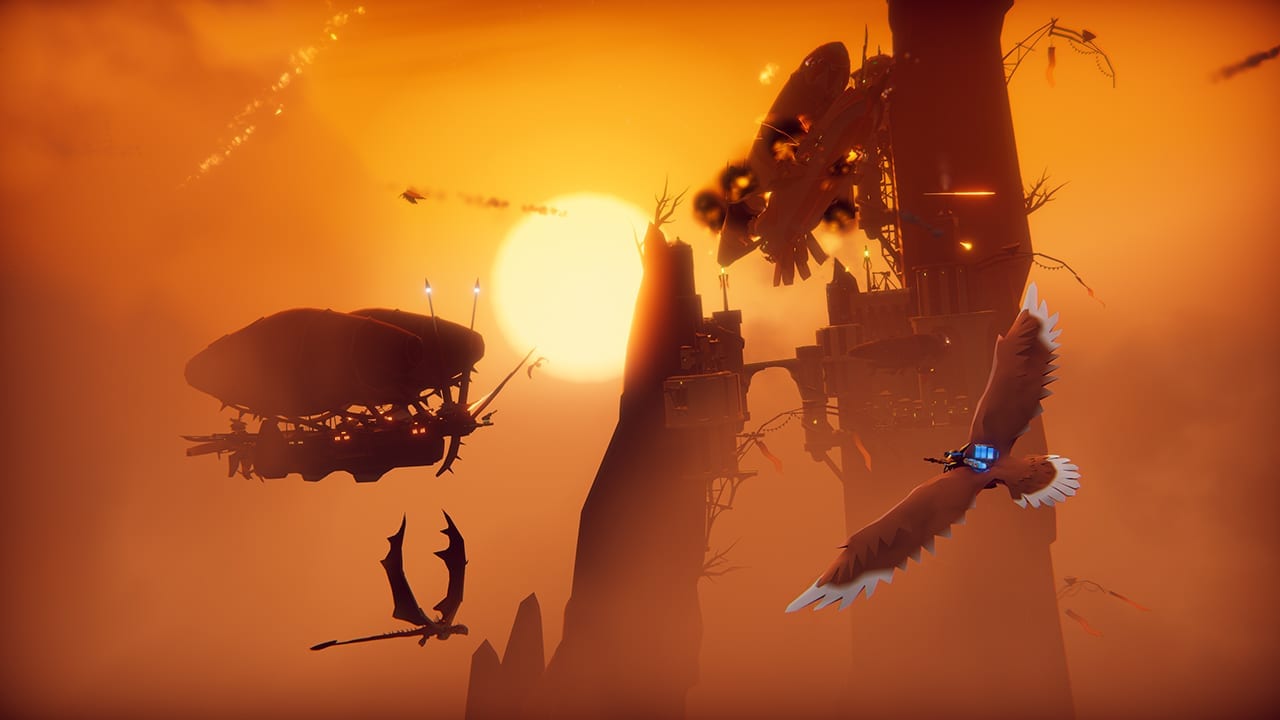 I recently had the chance to talk to Tomas Sala, creator of The Falconeer. If you haven’t heard of The Falconeer it’s an upcoming launch game for the Xbox Series X and Series S. Not planning to pick one of them up? Don’t worry it’s also coming to PC!

In The Falconeer you fly on an absolutely massive bird and explore the world, help its people, and have aerial battles against other people flying massive birds, sailing boats, and more.

When I went hands-on with the game I enjoyed what it was doing. The world was interesting to explore with a lot of lore being teased in the preview. The voice acting left something to be desired and the graphical style won’t be for everyone, but it definitely has a unique aesthetic.

I’m curious to see how it plays on Xbox. I much preferred my time using a mouse and keyboard than a controller but there’s no denying it was fun with both control types.

Enough about what I think about the game though. What can the creator of the game, Tomas Sala tell us about it?

An INterview With Tomas Sala, Creator of the falconeer

Tomas Sala has done a lot of the work on The Falconeer by himself, which is an impressive feat, especially considering the scope of it. Sometimes there can only be a matter of moments to hook someone into your new game though. How would he describe it in just three words?

Not the kind of words you’d expect to hear on the initial pitch of a bird based aerial combat game. Then again The Falconeer isn’t a game that seems to want to dance in the shadows of others. It’s a game that is trying to make its own stamp in the air combat genre.

What inspired The Falconeer?

“I’d say in terms of games I very consciously went back to the flying games I played growing up. Starting with the Aces Over the Pacific, Secret Weapons of the Luftwaffe, Red Baron. Then Comanche and even Privateer and Freelancer, up to of course Crimson Skies.

The latter for me setting a tone of high flying fantasy that really struck a chord with me. I’ve also spent a few years doing Skyrim mods (Moonpath to Elsweyr). It instilled in me a passion for environmental storytelling; worlds there to explore and piece together by yourself.

In that sense, game-wise, you can really feel the merger of Skyrim and Crimson Skies in The Falconeer. That’s why I hope to have a lot of fun in the coming year adding more small environmental stories to the world. Something I’d like to do a lot more of.

A wreck you find in one mission should have a story to discover outside of that mission. Those great moments where you realise objects and people have a story beyond just your random encounter. I’d love to add a lot more of that after release.”

Was the Level of Attention on The Falconeer Expected?

For an indie game made by more or less one person The Falconeer has had a lot of attention, in part due to it being a launch title on the Xbox Series X and Series S. Was it something Tomas was expecting?

“You don’t set out on a journey like this with the expectation to be successful or seen this well.  At least I didn’t. I started this because I felt working in larger teams, and the stresses of working to create other people’s ideas had run its course with me.

To be honest, I’d reached a point where I didn’t care anymore. I just wanted to make what I wanted to make, without compromise. The only goal post was to do that and make sure I could support my family.

Looking back now, and looking at what’s there, it is certainly an uncompromising game. It’s also completely different because of that near fatalistic attitude. I think there is an audience that wants that. They are looking for a game that doesn’t provide the perfect ride into the (albeit very epic and polished ) experiences they’ve done over and over. They want something that takes risks, might fumble parts of it, but is willing to be something new. Just… be itself I guess, that is attractive as well.

So no, I didn’t expect it, you can however feel it in the air, from people’s reactions and the growing response on social media. For me, I refused to believe any of it, until people started to play it and they started to vibe with what I was trying to do.

I think that is always the benchmark. Even now, I will be on edge until release, nervous for some game-killing bug, or regrettable design choice stemming from developing solo.

But on the whole I’m just very grateful for the attention it has had. Having now seen people play it enjoy it and get excited for this world and its stories.

Diving into The Falconeer For the First Time

Just approach it with an open mind. It is many things. Haunting landscapes to explore, frenetic high-speed battles and sometimes puzzling and hermetic lore.
I’ve heard it takes a little while to get going but there is actually no need to approach the Falconeer in a linear fashion. You can try out any of the 4 chapters/campaigns in any order.

Just like the mythical backstory, it doesn’t matter where you start. They all work towards the same central arc and theme. So, no need to hold to any conventions. I’d say when you start, pick the chapter/faction that intrigues you most, and work from there backwards or forwards. Progress is carried over between the chapters. It allows you to see the world of the Ursee at different stages of conflict.

One final question I wanted to ask Tomas was about working across the Xbox Series X and Xbox Series S. In an interview with WCCFtech, Detroit: Become Human creator, David Cage, voiced concern and said “I think it is confusing for developers”. Is it confusing though? I asked Tomas to let me know his experience on creating the game across both the Series S and Series X.

I think the logic with the Series S and Series X is really clear. The CPU and i/o performance is basically a Series X. I think people sometimes think optimising graphics is the hardest, but for me CPU performance is more difficult. There is no global option other than fps to scale down. Often game logic or physics is on separate timing anyway.

With graphics you can just scale down the resolution and there is a quadratic reduction of load, and often that will suffice.

That’s a super simple call that Microsoft have built into the Series S. Whatever you do at 4K the Series S will do at 1440p (or sometimes more, depending on if your game is CPU or GPU bound).   That is honestly not a huge technological leap. In my experience it took really no effort to go from X to S, other than finding the optimal settings for the device for your game.

Even if your game is GPU bound, so heavier on graphics than gameplay, it should be as simple as trying out a few settings, nothing more.

The Falconeer launches on November 10th on Xbox Series X | S, Xbox One and PC. It is developed by Tomas Sala and published by Wired Productions.