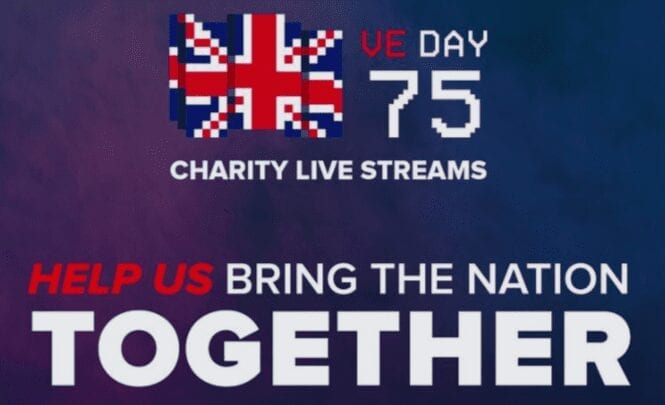 Today (May 8) marks the 75th anniversary of Victory in Europe Day, and since lockdown is still in effect in the UK, the remembrance is going virtual thanks to the Legion Games.

The Legion Games is a part of The Royal British Legion, the country’s largest Armed Forces charity, offering support to both the Serving and ex-serving community. This weekend the Legion Games team is hosting a 75-hour-long series of streams to bring “gaming, entertainment, and laughter to Twitch,” in honour of the 75th anniversary of VE Day.

Starting at 11am BST today, the stream will begin with the nationwide two minutes of silence, before gamers, the armed forces community and influencers, will take to Twitch to begin the commemorative celebrations.

In a press release, Legion Games said the following: “As well as commemoration, the livestream celebrates the important role that video games play in the lives of the serving and ex-serving communities, especially during these unprecedented times…

“All three military services are represented in the livestream, including a virtual flyover the Cliffs of Dover from the Royal Air Force’s RAFVGEA, an esports tournament from the Army Lions League and streams from the Royal Navy’s serving personnel.”

The event will also see a “life history-lesson/war game,” as military historian Dan Hill will be “shoutcasting” Hearts of Iron 4 while talking through the actual military history.

“As we face some of most challenging times since World War II, it’s now more important than ever to come together to unite in recognition of all those who have given service to the nation, just as communities did 75 years ago,” said Jamie Bedford, Head of Innovation and Planning at The Royal British Legion.

“This year we are unable to take to the streets to commemorate, so the Legion Games aims to bring the nation together online with a series of livestreams across 75 hours this weekend.”

One of the community members who’ll be joining in the fun is keen gamer, Daniel, who served in the Army for 16 years before being medically discharged.

“My grandfather served in the military and would often tell me stories of some of the extraordinary events of the war, including bombs being dropped whilst living in London as a boy,” he said. “I would like to pay tribute to those who sacrificed everything for me to be here today, which is why I’ll be commemorating on Twitch this weekend.”

Check out the stream right now on Twitch, and get involved across social media by using the hashtags #VEDay75, #PlayApartTogether and #StayHomeSaveLives.