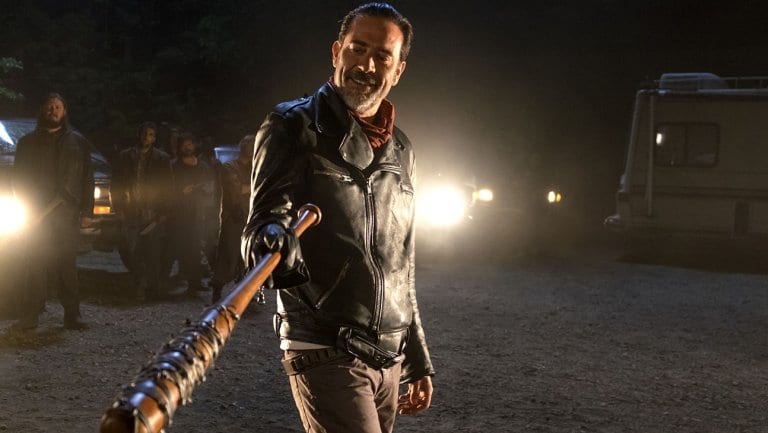 He may have brought an official end to the comic book series, but the creator of The Walking Dead, Robert Kirkman has revealed that he’s not finished with the expanding the TV series’ universe just yet.

Even if Rick Grimes is dead and buried, Kirman is teasing a spin-off story for the fan-favorite Negan.

With no warning at all, Kirkman confirmed July 3’s 193rd issue would be The Walking Dead‘s last. Pulling the rug from beneath us all, Skybound Entertainment even created fake covers for Issue #194 and #195 so fans wouldn’t know the end was nigh.

During this year’s Comic-Con International, Kirman opened up about where his undead world could go next and how he could shift focus onto Negan. Speaking during the action-packed San Diego panel, Kirman explained (via Polygon), “Negan is alive. I think that’s a cool tidbit. He’s still out there, theoretically living in that farmhouse, so there might be a story to be told there.”

Although he reiterated there are no current plans to revist Negan, it’s a case of never say never. The acclaimed writer added: “It’s possible that that’s my escape hatch’ if my career takes a hard nosedive — I’ll just roll out a Negan comic when I’m 42.”

What could this mean for AMC’s The Walking Deadseries though? While the show is a different beast to the comics and constantly keeps us on our toes, Jeffrey Dean Morgan’s portrayal of Negan has been causing waves since his arrival back in Season 6.

Even if The Walking Dead TV series shuffles off to an early grave in the near future, there could still be hope for a Negan-centric series. Only recently, the network cast a third spin-off show to sit alongside The Walking Deadand Fear The Walking Dead. Despite some people being unconvinced by Morgan’s pint-sized version of Negan compared to his comic book counterpart, the character has grown in popularity in newer seasons.

Speaking about what’s coming next for the bat-swinging psycho, showrunner Angela Kang told Entertainment Weeklythat there could be a redemptive arc on the horizon.

Kang explained, “While he may be on a different path than his dictatorship days, there are still flashes of that rude and crude charm.”

“Some of the stuff [Jeffrey] is doing is so compelling, because here’s this guy who has been on a path of trying to redeem himself in some way, but he’s still Negan,” she continued. “He’s not the hero. He’s, at best, an antihero, but there’s definitely darkness and an edge to him.”

So, with Negan still alive and kicking in both the comcis and the world of TV, all that’s left to say is “batter up”.