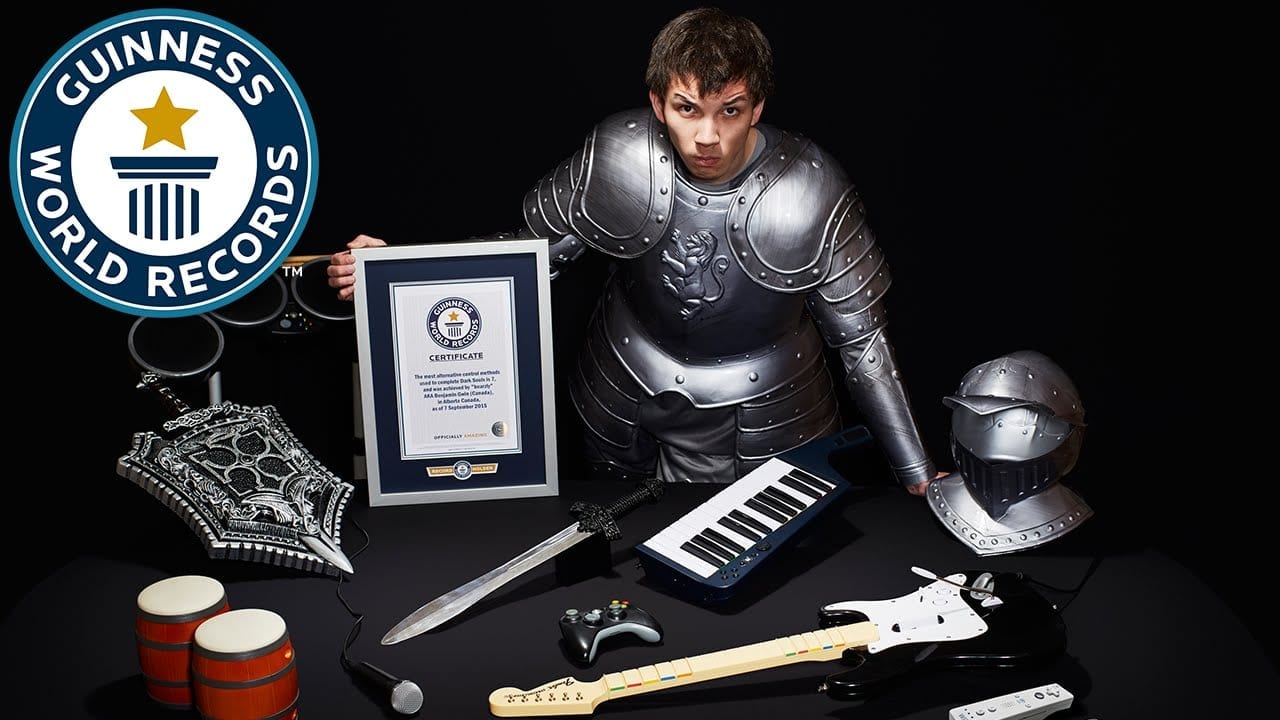 Completed Dark Souls yet? You must be feeling pretty proud of yourself. Come back when you’ve completed it with 9 different controllers Benjamin “Bearzly” Gwin and then we’ll be impressed.

According to the Guinness World Records website, Bearzly started his Dark Souls journey with a Rock Band guitar. After that, the rest was history.

How The Guinness World Record For Dark Souls Was Set

When Bearzly first started playing Dark Souls, he never expected he’d be given a Guinness World Record for it. At the time, he had heard about how people were playing Dark Souls with unique controllers to keep the game challenging.

To try it out himself, Bearzly started with a Rock Band guitar and he streamed himself doing it to just a few viewers. Word quickly spread as Bearzly made it all of the way through the game with just a Rock Band controller.

There were five buttons at the top of the guitar and these were mapped to attack, roll, change grip, use items, and to lock onto a target. To turn right, Bearzly had to tilt the guitar. Interestingly, Bearzly couldn’t actually turn his character left. 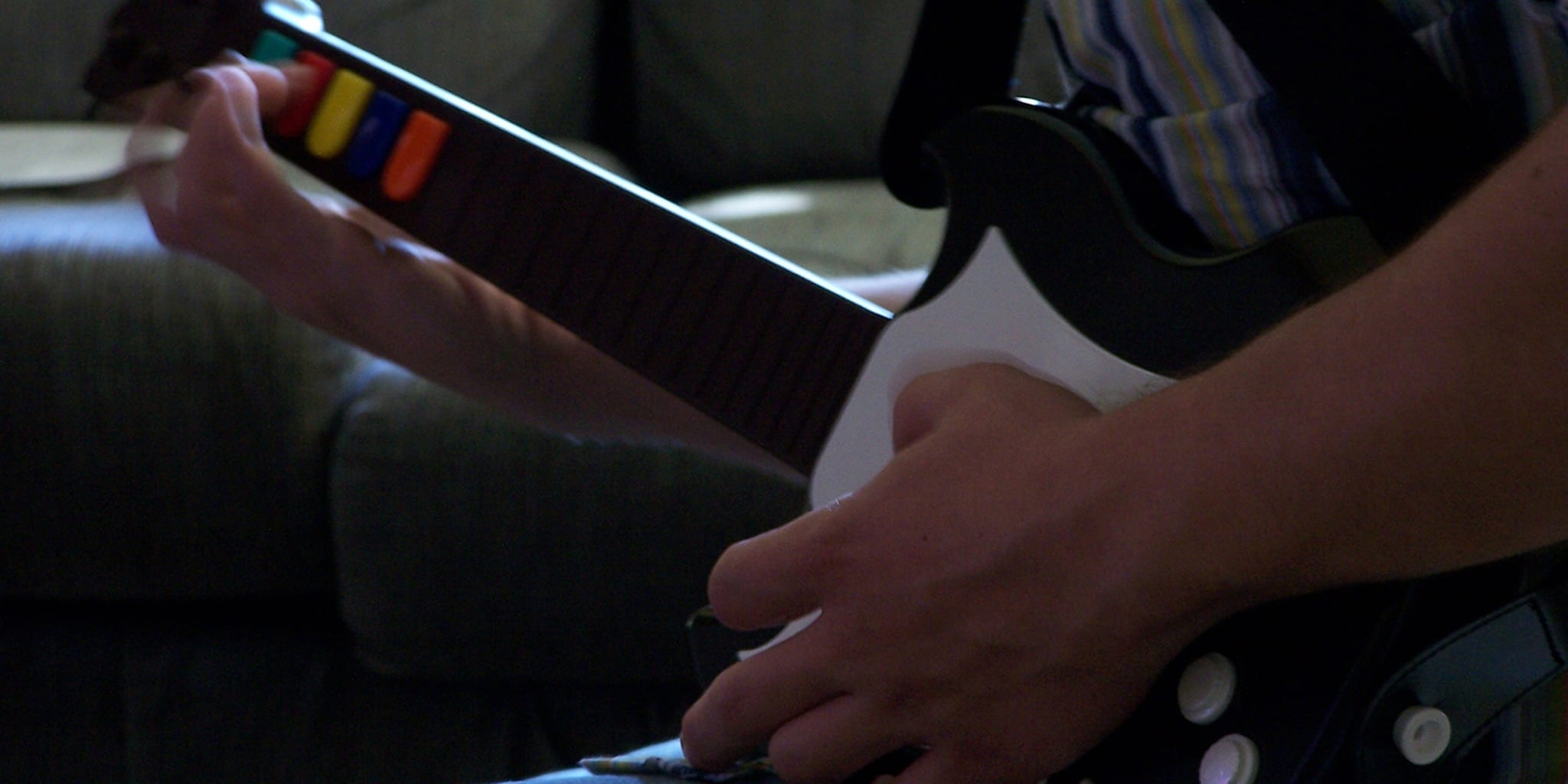 Eventually, Bearzly looked back and realized that he had completed the game with a total of 9 different controllers.

How Bearzly Managed To Complete Dark Souls with 9 Controllers 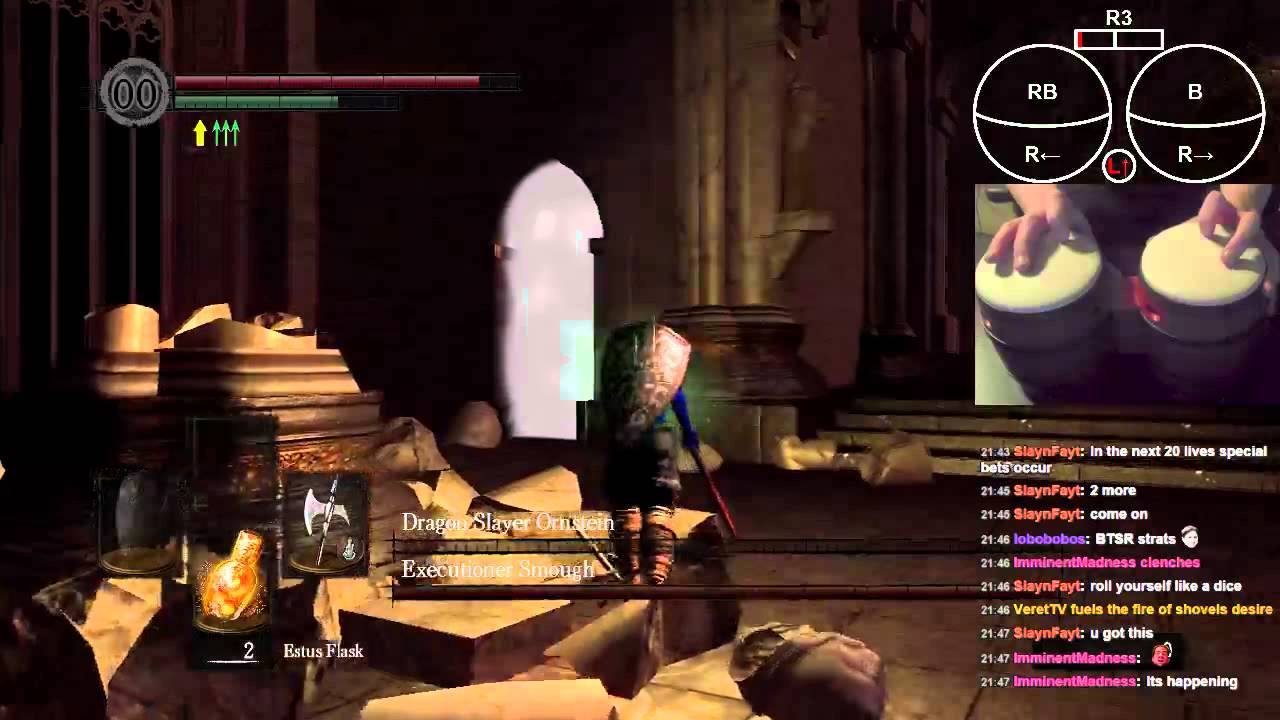 According to Bearzly, he chose to play Dark Souls with as many controllers as possible because it was his favorite game and was notorious for being difficult. He wanted to show people that if he can complete the game with strange controllers, anybody can complete it.

After the Rock Band guitar, Bearzly went on to complete the game with the following peripherals:

Perhaps the most interesting out of all the peripherals is the Rock Band drum kit. For this, Bearzly set up the controls so that the kick pedal moved him forward, hitting one drum would turn the camera left, and another to turn the camera right.

Bearzly could hit the far left drum to roll and the far right drum to attack. Playing the game on a dance mat also proved to be quite difficult. Bearzly mentioned that playing Dark Souls on the dance mat was actually quite tiring. 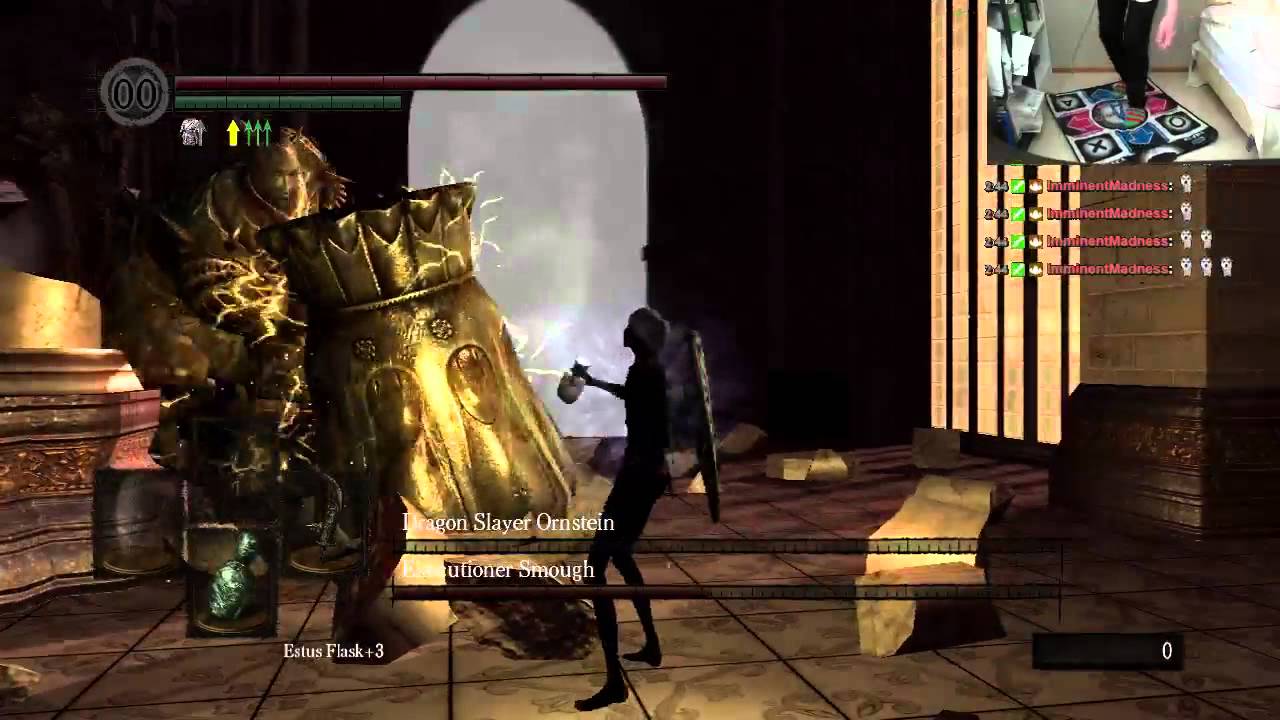 He had to spend a lot of the playthrough standing on one leg whilst using the other leg to activate the different controls.

Another interesting playthrough was with a microphone. Bearzly had set it up so that he could speak the actions he’d like to perform through the microphone and then they’d be done in the game.

This one looked like the most painful one because the input delay from speaking and watching the action on screen was 1-2 seconds.

Bearzly custom coded some controls for the Donkey Konga bongo drum set so that he could actually play Dark Souls with just two buttons. On default mode, one bongo drum would turn left, whilst the other would turn right. 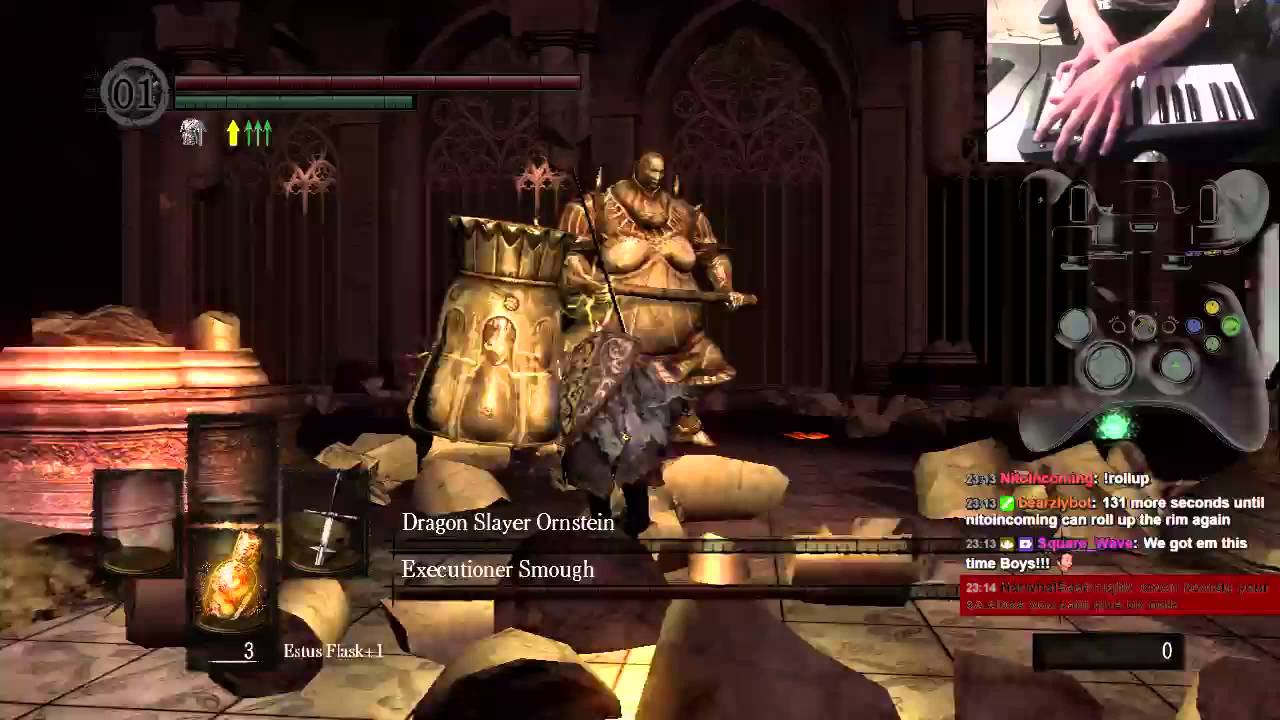 For the piano, Bearzly had to play different chords to activate different controls. Some chords would have multiple commands depending on how hard the buttons were pressed.

To get a lot of the controllers to work well enough, Bearzly did have to do a lot of custom coding. He mentioned that this is why he was able to complete Dark Souls successfully with controllers that nobody else has ever used before.

Other Crazy Ways Dark Souls Has Been Completed

Despite holding the Guinness World Record, Bearzly still has many other Dark Souls challenges to try. I’ve showcased a number of methods below that have been accomplished or tried in the past.

Somebody managed to hook up a bunch of bananas to a circuit and used that to complete Dark Souls 3. Every time a finger touched a banana, the circuit was completed and that could trigger an action in-game.

Because there is no limit to how many bananas can be used, this control method should actually be one of the easier alternative control methods out there. 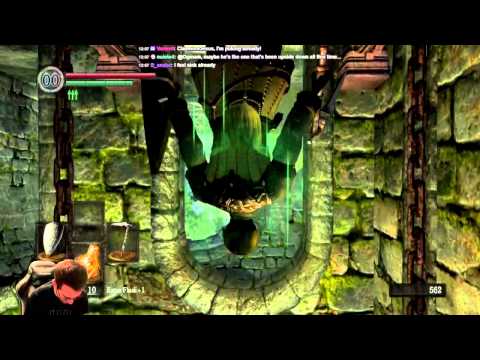 No Rolling Or Level Ups 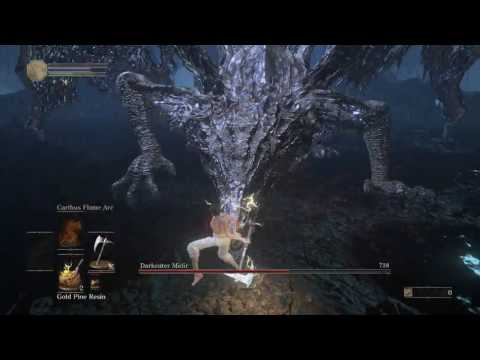 TolomeoR managed to make his way through Dark Souls 3 without rolling, blocking or sprinting. To makes things more challenging, he didn’t level up once.

According to TeolomeoR, a lot of this playthrough came down to luck and he had to replay boss fights a number of times until luck was on his side.

Dark Souls Without Getting Hit 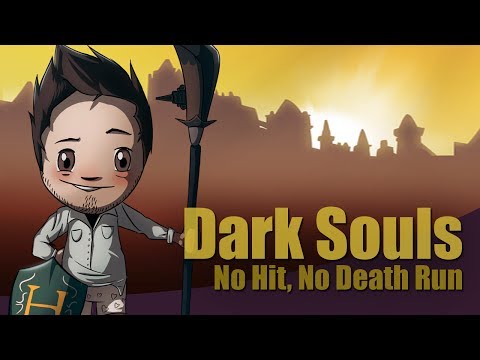 In his successful run, the game only took him 4 and a half hours to complete. As you can imagine, things started to get very tense right at the end.

What are your thoughts on these crazy world records and Dark Souls playthroughs? Do you think you know any of the Dark Souls games well enough to pull off any of these challenges? I know I certainly couldn’t do any of these things.