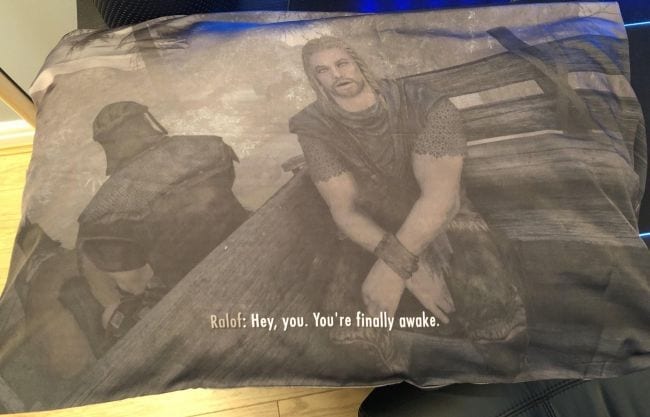 It’s not even Halloween yet but if you’re already prepping your Christmas list for the year then you might want to add in this Skyrim pillow.

Created by Redditor o0PETER0o, the pillow features the iconic opening of The Elder Scrolls 5: Skyrim, complete with the text: “Hey you. You’re finally awake.” Geddit? Because it’s a pillow! Genius!

o0PETER0o shared the creation over on Reddit, where it quickly blew up the internet. The creative gamer explains that they had the pillow (or pillow case, if you want to get technical) made for a friend, courtesy of bagsoflove.co.uk.

Of course, the possibilities that this opens up are endless, so expect a lot more hilarious video game pillows showing up on Reddit in the near future.

Speaking of Skyrim, an update to one of the game’s most popular mods has completely overhauled the entire world.

Requiem – The Roleplaying Overhaul comes from expert modders the Requiem Dungeon Masters, has been created with the sole focus of making the game more RPG-friendly, and with the mod’s latest update, the team has overhauled almost the entirety of Skyrim.

The amazing mod, which you can check out over on NexusMods right here, has seen a pretty extensive update as of October 5 2019, and the new additions are seriously impressive.

The mod’s description reads as follows: “Requiem started as a personal project to turn Skyrim into a more realistic, internally consistent roleplaying experience… and it has grown greatly ever since.

“Built and developed by a small team of dedicated modders, writers and testers – the Requiem Dungeon Masters – Requiem is the result of several thousand hours of continual development and refinement.”

Give Requiem a look and download it for yourself over at NexusMods right here. Thank me later!