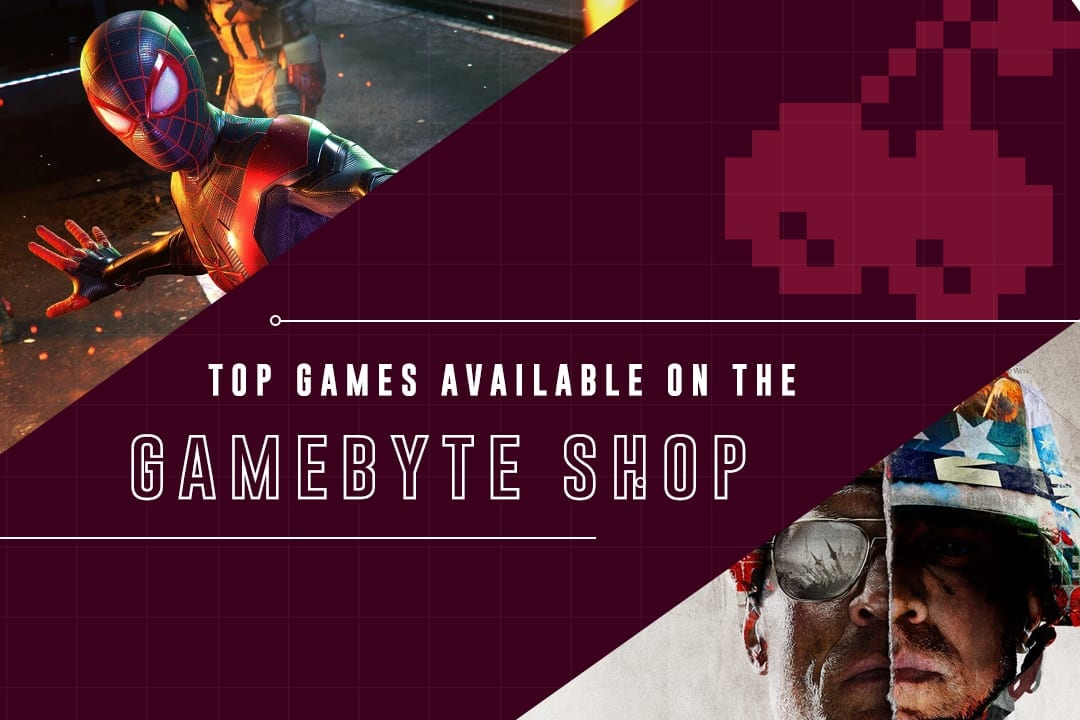 After a pretty tough year the end is finally in sight, and between the Holiday season and the launch of Xbox Series X|S and PS5, it’s definitely not a cheap time to be a gamer. Thankfully GameByte is here to help ease your stress with the launch of the new GameByte Shop!

The doors to the GameByte Shop are now open, and you’ll be able to pick up all the must-have games, accessories and – with a little luck – perhaps even a new console…? From headsets to plushies, AAA games to controllers, the GameByte Shop has you covered with fair prices and tons of choice.

If you’ve just picked up a new PS5 or Xbox Series X|S and you’re struggling with what games to play, here’s 10 of the must-have titles for your new console – straight from the GameByte Shop!*

One of the best games to play on either your Xbox Series X|S or your PS5, Assassin’s Creed: Valhalla is packed with endless hours of questing, raiding and drinking. Available for both PS5 and Xbox, this is an instant classic that’s going to keep you entertained straight through the festive period and beyond. Pick up a copy from the GameByte Shop for just £49.99, get yours for Xbox here, or for PS5 here. PS4 versions are available here.

Yakuza: Like A Dragon might be the finest installment in the series to date, and it couldn’t look better than it does on Xbox Series X|S. Follow the story of Ichiban Kasuga, a low-ranking grunt of a low-ranking yakuza family in Tokyo, in what’s a surprisingly heart-wrenching tale of family, tragedy and violence. Yakuza: Like A Dragon is available now on Xbox (with Series X|S optimisation) for £40.95. You can also buy it for £40.95 on PS4.

What’s a console launch without a racing game? DIRT 5 takes racing to the next level with incredible graphics that’ll boggle your brain. Whether you’re a fan of taking to the tarmac or not, DIRT 5 is an essential game for your new console. Pick it up for £49.95 on PS5 here, or Xbox (with Series X|S optimisation) here.

Planet Coaster: Console Edition is definitely worth adding to your collection – especially as it’s just £35.95 on PS5 and on Xbox (optimised for Series X|S). Run your perfect theme park – and keep your guests happy – in this iconic management sim.

The latest latest release in the best-selling NBA 2K series, the franchise comes to the latest consoles with NBA 2K21. The perfect game for sports fans – and with improved graphics, textures and load times – this is NBA like you’ve never seen it before. Get it for PS5 here and Xbox Series X|S here.

Hands-down one of the most essential games for your collection, the latest Call of Duty is worth the price for its Zombies mode alone. Black Ops Cold War puts a darker twist on the series, which this time takes place in the 1980s. Shoot through the campaign and then take on the multiplayer, available for both Xbox Series X|S and PS5.

A silly one but a good one, this RPG made a splash earlier this year and has now swum to warmer seas on Xbox Series X|S and PS5. This open-world game spins the RPG genre on its head as you play as the shark. Build your skills and dominate the seas as one of the ocean’s scariest predators. Daft? Yes. A must-play game? Absolutely. Get it via the GameByte Shop for Xbox Series X|S and PS5.

Can we include a pre-order in this list? Well, we’re going to, because LEGO Star Wars: The Skywalker Saga is an upcoming game that’s more than worthy of going for the Deluxe Edition. Although this game doesn’t yet have a release date, we just can’t wait to dive into the full story of the main Star Wars movies. The Deluxe Edition can be pre-ordered for Xbox Series X|S here, and PS5 here. (Psst, get the regular edition here!)

Okay, okay, we’re getting cheeky now, but Hitman III is coming soon and you can pre-order your copy right now! The dramatic conclusion to the World of Assassination trilogy is one game you’ll definitely want to go Deluxe Edition with, and you can order a copy for either Xbox Series X|S or PS5 from the GameByte Shop today!

So there you have it – 10 unmissable games you can buy (or pre-order!) from the GameByte Shop right now. You won’t just find games there though, as we’ll also sort you out with headsets, plushies, Amiibo, keyboards, figures, consoles, console accessories and pretty much anything else you can think of. Support us and check out the GameByte shop right here!

*Subject to stock availability. Prices correct as of time of publication.