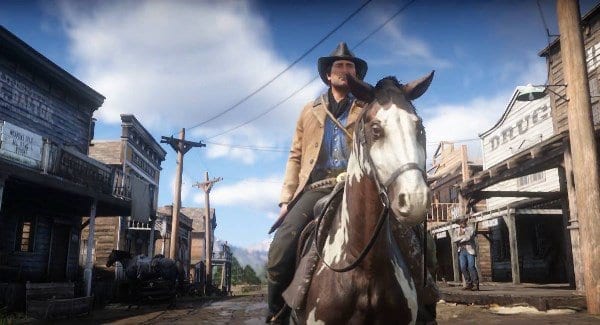 We’ve got a little bit of everything this month, from the launch of Google Stadia, Hideo Kojima’s first game since his divorce with Konami, Rockstar Games latest smash hit coming to PC, and we’ve even got games coming to PS Vita and the Nintendo Wii!

Please keep in mind that release dates can differ and change within an instant, depending on your region.  That said, here are my highlights for this coming November 2019 and as always, I’ll also include the best of the rest.

For me, along with the Resident Evil 2 remake, Red Dead Redemption 2 is my game of the year so far.  For starters, I love western movies and the level of titles that Rockstar Games produce.  Red Dead Redemption 2 had everything, competent gameplay, an incredibly immersive world, a gripping story, stunning visuals and a superbly supported voice-cast, an awesome soundtrack, not to mention the inclusion of Red Dead Online.  Now PC gamers will get to see what all the fuss is about when Red Dead Redemption 2 releases this November.

Now I’ve deliberately stayed away from watching too many gameplay trailers and reading up too much information of Hideo Kojima’s PlayStation 4 (for now) exclusive.  Death Stranding is a weird one, you play as Sam Porter Bridges (Norman Reedus) who is exploring the world attempting to reconnect communities and a society considered to be lost, and to bridge our world to another, with the aid of mysterious babies carried in pods, who seem to be key to it all.  However, the world is now plagued with sinister supernatural beings that are a deadly threat to the existence of mankind.  However, perhaps the most immersive aspect of Death Stranding, is that you can urinate from mountaintops!

I know we’ve seen and heard it all before, but EA appears to have listened to fan feedback from the previous Need for Speed outing, Payback.  In what I’ve seen so far, it does appear that the publisher and developer Ghost Games wants to capture the essence of why we originally held this street racing series so dear.  So as a result of the previous backlash, Need for Speed: Heat promises to not feature random card mechanic in which Payback was built around.   This year’s entry will see the return of proper car customisation (which you can also customise via a free mobile app), fun arcade gameplay, and a day/night cycle that will directly affect how you play and interact with the world of Need for Speed: Heat.  Will this be a return to form that EA wants us to believe?  Only time will tell.

The second of two big hits arriving this month from Electronic Arts, Star Wars Jedi: Fallen Order.  EA once infamously said that linear singleplayer games are no longer popular as they once were.  However, this statement has proved to be very far from the truth, with the success of Horizon Zero Dawn, God of War (2018), the Resident Evil 2 remake, the recently released The Outer Worlds and much more.  In Star Wars Jedi: Fallen Order which takes place after Episode III: Revenge of the Sith, you play as perhaps the last Jedi, Cal Kestis who is being hunted by the Galactic Empire as they aim to outright wipeout the Jedi Order once and for all.  Desperate to survive and take the fight to the Galactic Empire, Cal joins forces with a rebel resistance group that has as much to lose (and perhaps gain) as our protagonist.  As optimistic as it might sound, if Star Wars Jedi: Fallen Order proves to be a commercial and critical hit, it might just revive EA’s view on the demand of the singleplayer game.

Not to discount Let’s Go Pokémon Pikachu/Eevee, but Pokémon Sword and Shield will be the first proper Pokémon game to release for the Nintendo Switch, and to say anticipation is at a high, is an understatement.  In Sword and Shield we will venture through the new Gala region in the hunt for the most prestigious of Pokémon and aim to become a world champion trainer.  Not only will we have new Pokémon to capture (including two new Legendaries), a new free-camera and what is called Dynamax Gym battles.  This unique Dynamax Gym battle allows you to team-up with other players from across the world to battle against giant Pokémon for the ultimate challenge.  However, you can attempt to level the battle field by super-sizing your chosen Pokémon for three moves with maxed out powers.  If your team wins the intense Dynamax battle, you will have the opportunity to capture the supped up Pokémon in question.  Will Pokémon Sword and Shield take the series in an all-new direction?  We’ll find out soon enough.

18 years I’ve waited for this release…18 years!  The Shenmue series is one of my all-time favourites and sure, even back then, I was aware that the gameplay was very clunky, but its immersive world was something that I had never experienced before and it also inspired another favourite Sega series of mine, Yakuza.  In Shenmue 3, after landing in China, Ryo pursues the man known as Lan Di that murdered his father to get his hands on the mysterious Dragon Mirror.  Why did Lan Di murder Ryo’s father and what power does the Dragon Mirror harness?  These are answers that Ryo is desperate for with his added fuel of vengeance.  However, Shenmue 3 not only promises to continue the story of this beloved saga, but also aims to improve upon the clunky gameplay of yesteryear and with the power of the Unreal Engine 4, its visuals will also be modernised, all without losing the identity of this beloved series.  Let’s just hope that Shenmue 3 can live up-to the expectations of its loyal fans.

The highly anticipated Google Stadia streaming services arrives this coming month and whether it’s a hit or miss, it could have a massive impact on the gaming industry.  For those that have either purchased the Founders or Premiere Editions, you’ll be able to experience Google Stadia from day one.  Available in 14 territories and 31 games at launch, including Red Dead Redemption 2, Destiny 2, Shadow of the Tomb Raider, Mortal Kombat 11, Assassin’s Creed: Odyssey and more, you’ll be able to experience gaming like never before, whether it’s in the comfort of your own home on the TV or on the go via a mobile/tablet device.  You will of course need to have a very good internet connection to get the most out of Google Stadia, especially if you want 4K gaming at 60fps.  Whether you’re a fan of this service of or not, it will be interesting to see what impact Google Stadia makes on the industry.  The free to download version of Google Stadia will launch early next year.

Well, that concludes my highlights for this November 2019, so be to let us know what you’re looking forward to across our social media channels and don’t forget to check out the best of the rest below.