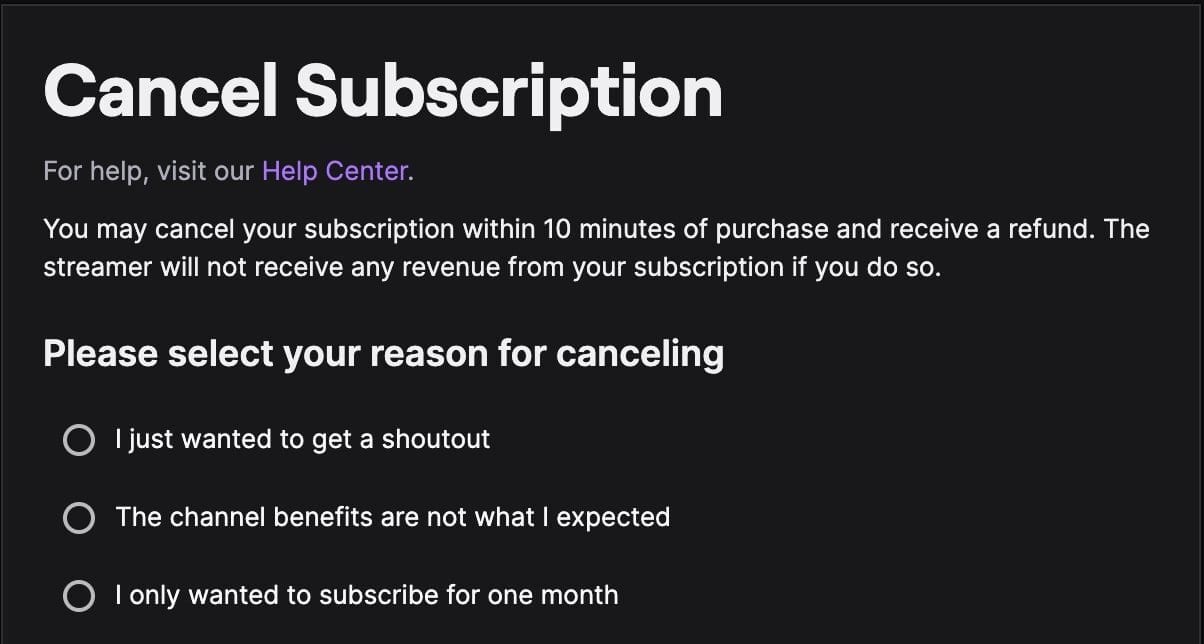 Gamers have been calling out Twitch for a subscription cancellation option offering a refund for “simply wanting a shoutout.”

If you watch streams on Twitch or YouTube, the chances are that you would have seen the option to make a donation or a super chat. Paying for these extras gives viewers some priority above the regular chat, usually to ask a question or pay a compliment to the streamer.

Sometimes viewers of a stream quite like to see their name appear on the screen, or have a question answered, plus it’s a great way to support your favourite content creators.

There is also an option to subscribe to your favourite content creator to offer additional financial support with recurring payments.

When you set up a recurring subscription to your favourite streamer, your name will often appear on the stream and can result in a shoutout.

Much like a donation or super chat, having your name appear on the screen and perhaps more is an enticing incentive for some viewers.

So what happens if the viewer just wants to subscribe to the streamer just to get a shoutout? You’d be stuck with the cost, right? Well…not exactly.

Gamers have called out Twitch for including a cancellation reason titled “I just wanted to get a shoutout.” Essentially, it gives gamers a 10-minute window in which they can refund their subscription.

Some content creators are worried that this option to cancel subscriptions instantly with no charge is encouraging “subscribers” to essentially get a free shoutout. Streamers could be “tricked” into receiving big donations, only to have them cancelled just moments after. If you’re financially struggling, this could be a massive blow.

A Twitch representative has addressed the controversy over on Twitter, announcing plans to remove the option due to the backlash.

“This limited refund window was originally introduced to protect against accidental purchases. These cancellation reasons were added in 2018 to capture why viewers are seeking refunds. Note – gift subs cannot be refunded this way,” said Twitch Support.

“This info is used to improve the subscription experience for creators and subscribers. We did not intend to make it seem like we are encouraging this behavior, and based on community feedback, we are removing the ‘shoutout’ option.”

The removal of the option seems like it’ll put an end to this latest Twitch controversy.

Where do you stand on this option to instantly cancel subscriptions with no charge? Let us know across our social media channels.

EDIT: An earlier version of this article stated that Twitch had not responded to the controversy. A Twitch representative reached out to GameByte with the statement shown in the tweets above. The article has been amended accordingly.