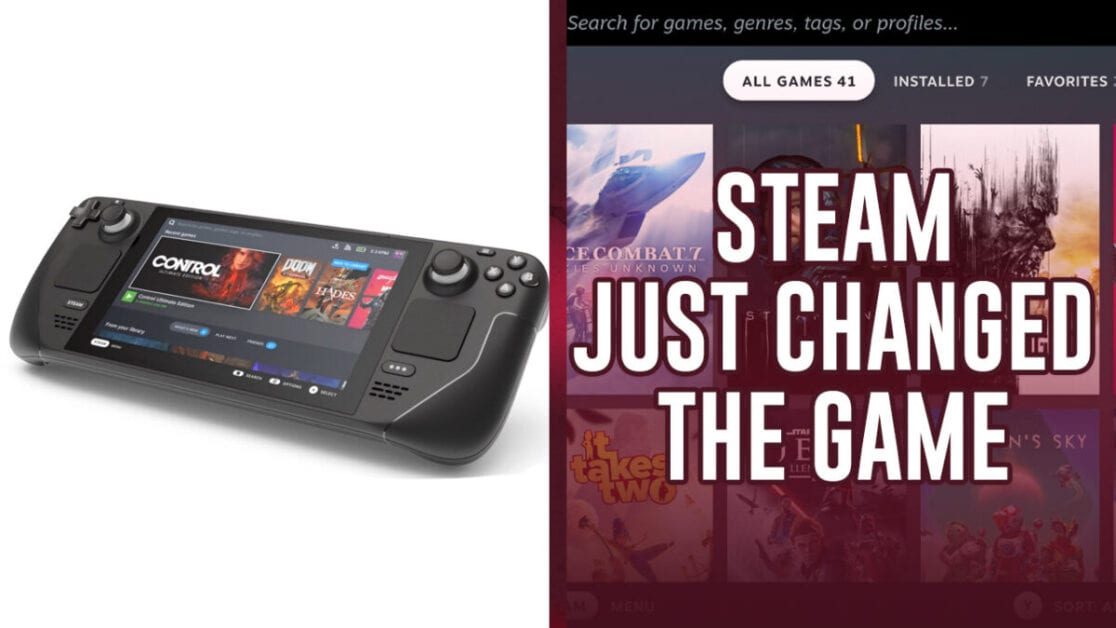 Valve has announced the Steam Deck, a portable console that is capable of playing your entire Steam library.

The Steam Deck is a portable console that looks incredibly similar to the Switch. The handheld unit comes equipped with a 7″ 720p LCD screen, flanked by thumb sticks, a D-pad and ABXY buttons. There’re also two trackpads that are reminiscent of Valve’s previous Steam Controller

Powering the unit is an AMD APU and 16GB of memory. There are three storage options ranging from 64GB all the way up to 512GB. Valve says: “We partnered with AMD to create Steam Deck’s custom APU, optimized for handheld gaming. It is a Zen 2 + RDNA 2 powerhouse, delivering more than enough performance to run the latest AAA games in a very efficient power envelope.”

PC Gaming on the go!

Just like the Switch, you can park the Steam Deck into a USB C dock. This will allow you you to hook up external displays or other peripherals, just like a normal PC. Unfortunately, the official dock will be sold separately from the portable unit.

The Steam Deck seems like PC communities perfect answer to the Nintendo Switch. It’s capable of playing your entire Steam Library while on the go. All you’ll need to do it login to your Steam account. That might be a big deal for those who currently use a Switch for playing indie titles. The lower price of games on Steam is enough to offset the higher unit price of the console.

The Steam Deck will launch this December in Europe, Canada, and the United States. Pricing starts at £349 for the 64GB version, with the 512GB variant going for £569. To combat the scalping issue that have plagued the new-gen console releases, Valve are also incurring a reservation fee at checkout.

Does the Steam Deck sound like something you’ll be picking up? Let us know across our social channels!