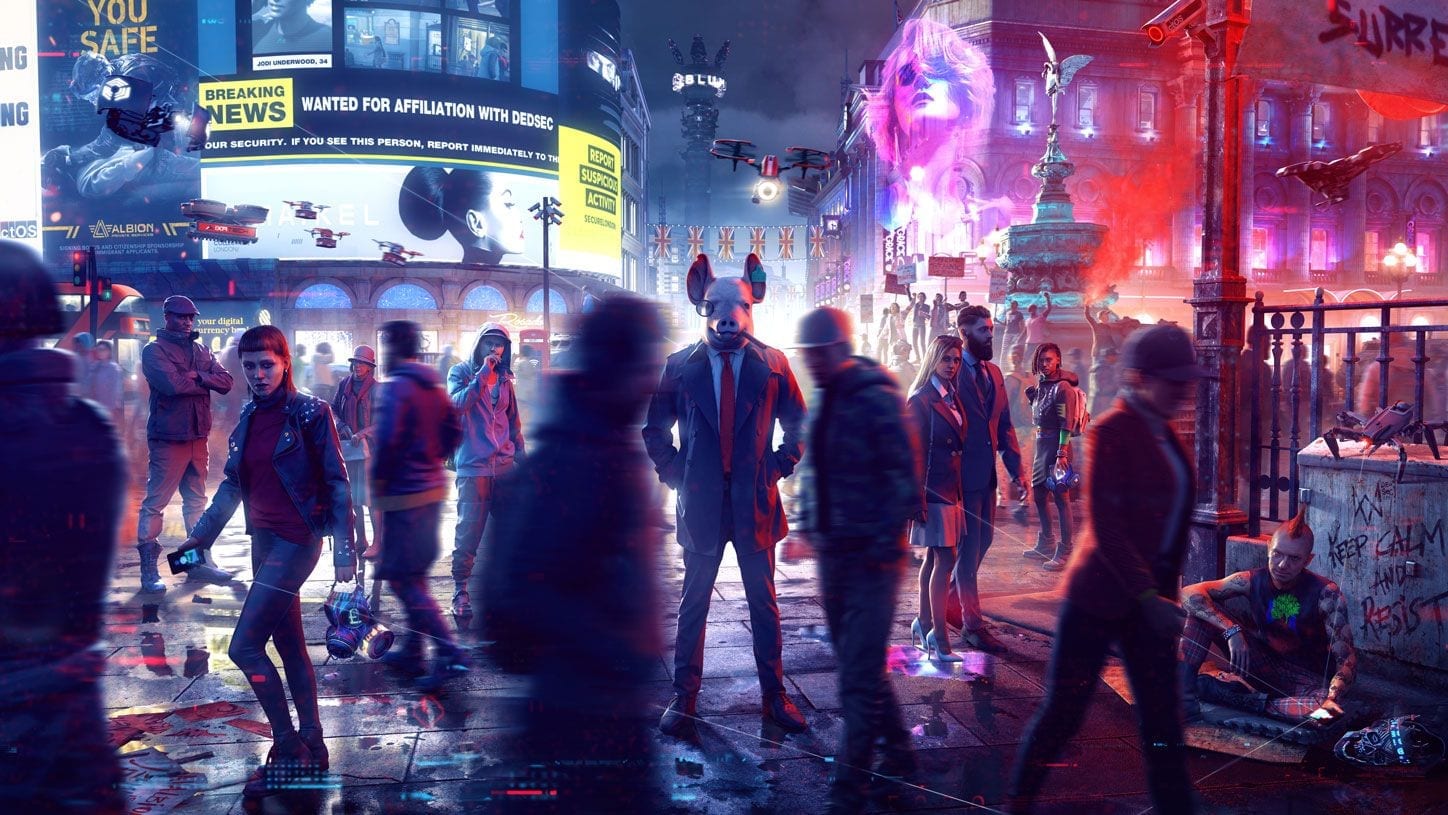 Watch Dogs: Legion takes the idea of a post-Brexit London, turns it up to 11 and puts an emphasis on political unrest. Ubisoft has infamously tried to stay apolitical in the past with its games but it seems the team is throwing away that mindset with Legion.

Although the game makes its point with a story that is over the top with a lot of its moments, it’s impossible to not draw parallels between the real world and the game. This is something that you also can’t help doing while driving around London. The recreation of England’s capital is stunning, with many iconic landmarks making an appearance. A lot of the fun in the game can just come from travelling around and enjoying the scenery.

This isn’t a tourist simulator though. There’s corruption that needs revealing to the world and it’s up to DeadSec to help reveal it. A lot of the characters feel exaggerated in the game. One of the main antagonists just straight-up shoots someone in a meeting and it’s treated like it’s going to be easy as pie to cover it up. Them being extra isn’t necessarily a bad thing. The world of Watch Dogs: Legion doesn’t take itself super seriously so it makes sense to have cliches and exaggerations at points.

That does mean some of the characters come across as caricatures though. Think of it as Guy Ritchie directing Dick Van Dyke to be a Londoner and you can get an understanding of the exaggerated nature of some of them. There also seems to be a few occasions in which some characters had the same voice as others. Considering the hook of Watch Dogs: Legion is to play as anyone, it should be important to make sure that there is as little repetition as possible… and ideally none.

Getting from A to B can be done in a variety of ways, you can steal a car, use a cargo drone or even switch to a character that has a vehicle as one of their perks. What is switching to a character like? Quick and easy, which helps encourage trying as many different characters as possible. Considering this is the arguably the main hook of the game, it’s implemented very well.

Although in my demo of the game I was focused on exploring the story and the city, there were plenty of potential recruits I could’ve brought into DeadSec, which would’ve then let me play as them. Interacting with people to begin the recruitment process is often a bit daft, with people instantly recognising you must be a part of DeadSec due to… reasons? It does help to add a lot of missions and variety to your experience though, plus there are a LOT of people to recruit. It’s going to be fun to try and find them all. Like Pokémon but with humans!

The people I interacted with ranged from travel agents to barristers, with the latter being someone that could help free other members of DeadSec if they get arrested. I even got to play as a police officer, who had their perks but also their problems due to certain areas of the map not liking there being police presence. Some of the characters you recruit are a little underwhelming at first glance but all seem to have interesting quirks and characteristics.

At times it felt like Watch Dogs: Legion was Hitman, but instead of costumes you had to just change people. After spending time recruiting someone so I could get into a restricted area, I was baffled to find out that they had to be careful around the guards because, despite being one, I would still be noticed by them as a member of DeadSec. This was disappointing, as the whole point of the person I recruited was that they were part of Albion, the big evil military force policing London, and the people I was trying to infiltrate.

It just didn’t make sense why I even bothered recruiting a guard when I would’ve had the same level of suspicion by being literally anyone in an Albion uniform, which surely can’t be that hard to find (and would probably have been much less effort).

The mission itself was also painfully archaic. In it, I had to walk around rooms in a small building to get to a point that triggered a cutscene. However, if I was discovered by any guards while doing this, it was an instant fail which reloaded the game to an earlier part. This was perplexing for two reasons: one being that my character was a guard that shouldn’t be arousing suspicion unless I’m acting up, and two: it made me realise the “gone forever” nature of the characters is only relevant at certain points in the game, which instantly makes everything feel far lower stakes.

This wouldn’t be as bad if the stealth mechanics were up to scratch in Watch Dogs: Legion. You can distract enemies by pinging their phones or making an electronic attract them but being stealthy in close quarters just isn’t very fun.

VARIETY IS THE SPICE OF LIFE

Luckily this isn’t what every mission in Watch Dogs: Legion is like. There are often a variety of ways of getting from point to point (even if the quickest way is normally by cargo drone… but that’s because the cargo drone is the best). Robot spiders are fun ways to scout places out without putting yourself at risk and, if you use a spy, you can even drive a car with rockets in! Watch Dogs: Legion was at its best when embracing the variety of what it has to offer. It was when it took choice away it lost its shine.

Unlocking areas by solving puzzles is also surprisingly addictive, with some requiring you to get to different angles to make it work. Plus it’s always good to just prank people and see how they react. As a playground for doing fun things, Watch Dogs: Legion has plenty to do.

The game feels like it gets better the more time you spend with it, which is not ideal when you only have a short amount of time to demo it. Being able to play as anyone, and tracking down more people to be, will add a lot of longevity to the finished product. The story of corruption that I’ve seen snippets of is intriguing, but the story missions varied drastically in quality.

There’s still refining that needs to be done with Watch Dogs: Legion but there’s no denying that it’s going to be an experience many will  love. Watch Dogs is still a fairly young franchise and it’s great to see it already doing something so different. Although each of the playable characters definitely have unique personalities it will be interesting to see if story beats can still have the same level of impact with such a huge cast of possible protagonists.

The “gone forever” element of the game will create some interesting bonds with characters, similar to what we see from roguelike experiences and other permadeath games. It made me panic on more than one occasion when my health got low as I knew that I could lose that character forever. Watch Dogs: Legion makes London a playground of chaos. If it can work out its issues before release it will be one you’ll want to go to again and again.

Watch Dogs: Legion is out 29th October on PC, PlayStation 4, Xbox One and Stadia. It is also coming to PlayStation 5 and Xbox Series X.