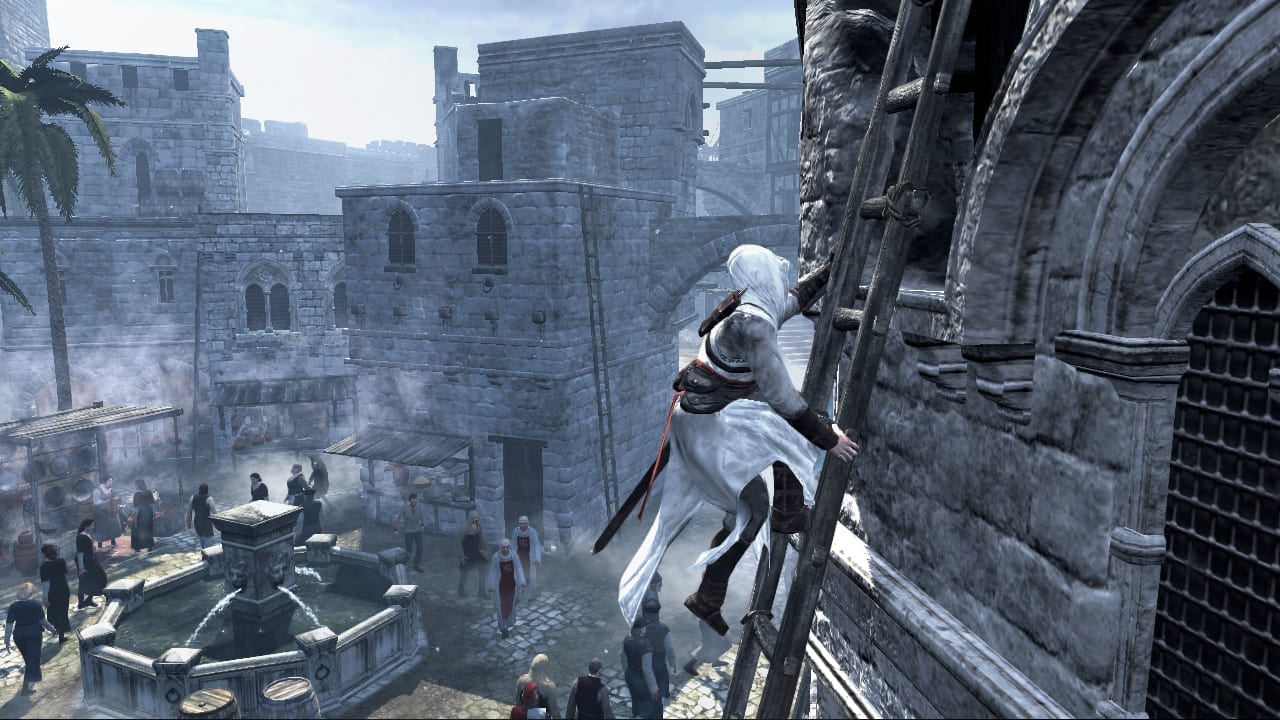 The Assassin’s Creed series is one of my all-time favourites. I can remember back in 2007, prior to the release of the very first game in the series, feeling so much excitement for this new IP from Ubisoft. Here’s why I think the original Assassin’s Creed really deserves a remake.

Similar to the games that followed, the original Assassin’s Creed was based upon fictional history and real-world events, which intrigued me immensely.

The premise of the first game highlighted a war between two factions: the Assassins and the Templars. Set during the Third Crusade in the year 1191, you played as badass assassin Altair.

However, you also played some segments as modern-day Desmond Miles, who would access Altair’s memories via a machine called the Animus. You would use these memories to fight against an evil corporation named Abstergo, who were run by the Templars Order.

The Templars’ end game was for world peace. On paper that sounds great, after all, isn’t that what most of us want?  However, there was a twist in the way the Templars aimed to achieve this: by obtaining the Apple of Eden.

If the Templars acquired the Apple of Eden they would be able to essentially control the human race, turning us into mind-numbing servants who would never question those who ruled over us.

Sure the Templars would perhaps achieve world peace, but they would also take away all free will of the human race, which is a cost too much to bear for the Brotherhood of Assassins.

Assassin’s Creed offered such an exciting concept. A game that would essentially have you travel through time by accessing ancestor’s memories (in this case Altair), loosely based on real events in real locations that existed in history.

With the three main sequels that followed, the original Assassin’s Creed quartet made you feel like you were really a part of this unbelievable story and adventure.

Sadly, I recently played the original and it hasn’t aged all that well. To be fair, the visuals still look good for its age and the story is still fantastic. However, in terms of gameplay, Assassin’s Creed hasn’t fared well over time. To be fair, Assassin’s Creed is nearly 14 years old, which is quite crazy. Looking back I think I always acknowledged its gameplay as a bit clunky, but now in comparison to recent games in the series, it feels clunkier than ever.

What A Remake Could Do

If Assassin’s Creed was remade it could reignite the emphasis on stealth, and could greatly benefit from modern visuals, super slick gameplay, and all the added benefits that the current generation would bring to the table.

I also wouldn’t want a huge open-world that we’ve seen in recent games, over-saturated with filler and littered with side-quests. I just want the original map and locations. Perhaps new areas in-between the major cities could offer the odd side-quest or two, but nothing overly dramatic.

I want the Assassin’s Creed series to go back to its roots. A remake could be a proper stealth game, which could take inspiration from the likes of the Hitman series with disguises and using the environments and NPCs to your advantage.

Sure I would like some action thrown in too, but only when you really had no other choice. I want stealth to be back at the forefront and combat as a secondary approach at best. Let’s also not forget that Altair has been severely underrepresented in this series in my opinion, and he deserves to be put back into the limelight (or shadows).

Imagine a 2007 Assassin’s Creed remake with stunning new-gen visuals, a solid 60fps, stealth mechanics inspired by the Hitman series and, when it’s required, the combat of Assassin’s Creed: Valhalla. I get excited at just the mere thought! Sadly in truth, a remake of Assassin’s Creed would probably never happen, but it’s a nice thought nonetheless.

Would you like to see the 2007 Assassin’s Creed remade or perhaps you’d prefer a different game from the Ubisoft series? Let us know across our social media channels.