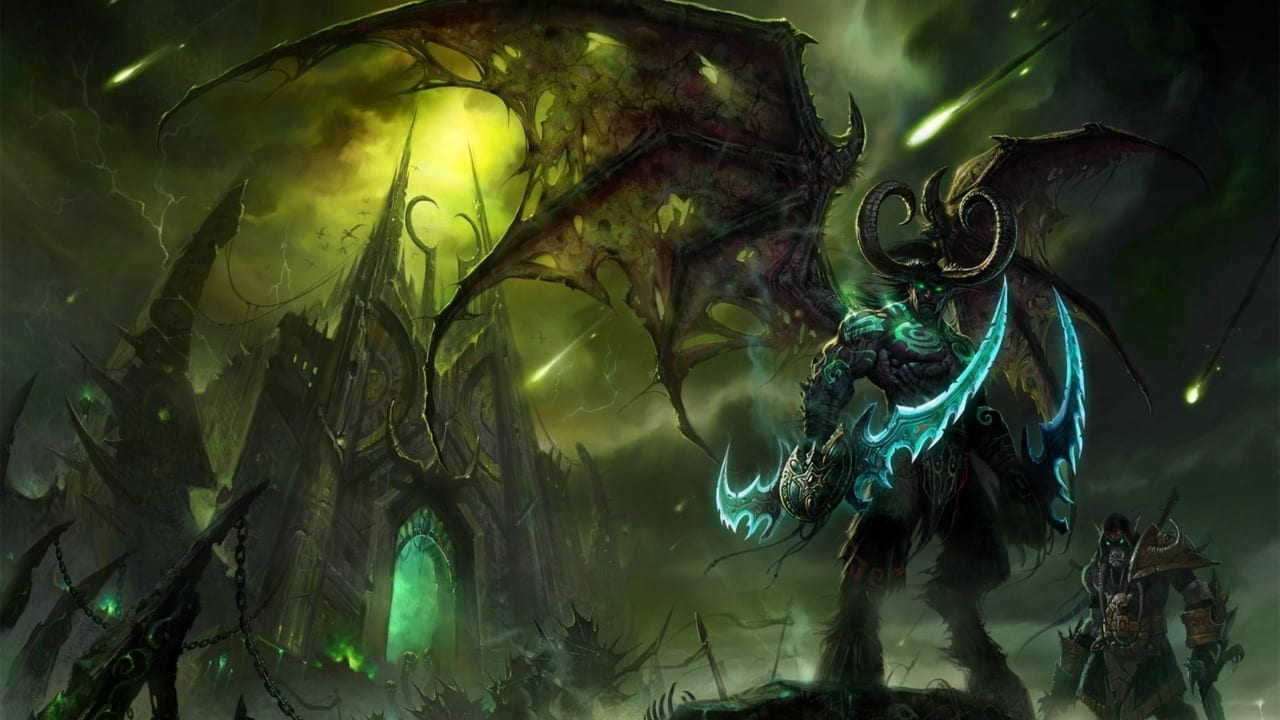 Perhaps the most famous and popular of all the MMOs, World of Warcraft is almost synonymous with basement-dwelling neck-beards that can’t hold down jobs…at least to those who hate the game. For its fans it’s a different story altogether – at least the ones that aren’t actually basement-dwelling neck-beards that can’t hold down a job!

Even the WoW-haters are usually roughly aware of the game’s premise. There are two factions, Alliance and Horde, and the on-going quests that run through the expansions of the already massive game advance a slow-ish storyline of war and conflict. 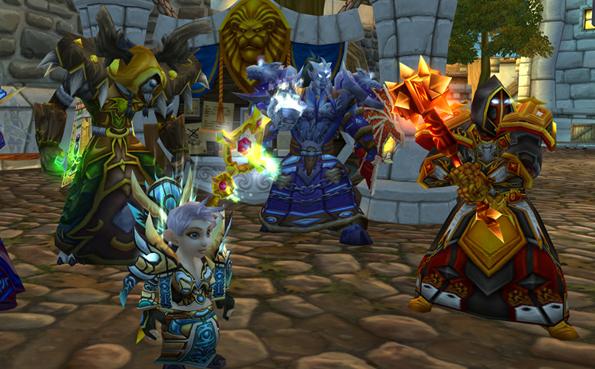 The most recent update however, changes things. (Warning, spoilers ahead.)

The Battle for Azeroth pre-expansion event reached a climax that really upset players. The second part of one of the quests – The War of The Thorns – went live a few days ago and it brought all out war between the Horde and Alliance.

That alone would hardly be a big deal. What bothers people is how blatantly wrong one side is. Philosophical debates that there is no right and wrong in a war aside, this is far from a justified conflict. Well, players already knew that the quest would end with the burning of Teldrassil, the tree that houses the night elf capital city Darnassus.

What they didn’t know however, was who would be responsible for the murder of the innocent citizens in that tree. Blizzard has been teasing this mystery for months now – since the Battle for Azeroth expansion was announced.

Yesterday, they released an animated short that reveals the culprit: Sylvanas Windrunner. Since this reveal, Reddit, forums, fansites and probably a carrier pigeon or three have been alight with outrage and disappointment at this development. Just about nobody is happy about the direction Blizzard is taking the story.

The first part of the quest explained the beginnings of the war with Sylvanas and the Horde surprising the Alliance by invading Darkshore. In other words – the first act of war not counting small conflicts in Silithus between the two factions.

The first chapter had the Horde storming north in order to capture Teldrassil to avoid the all out war, by taking away an important Alliance waypoint. It’s a reasonable although bold move, and in a war fought over the resource Azerite, it’s far from an outrageous thing to do – the same can not be said for these new developments.

Both sides are keen to get their hands on the powerful Azerite and Sylvanas simply took an opportunity to advance the position of the Horde. By sieging Teldrassil and killing one of its leaders, Malfurion, the Horde planned to take out a key part of the Alliance’s Azerite supply chain and devastate their morale.

In theory, this would have been a good move, one that would see to it that as few lives as possible are lost. Sadly, that’s not how Blizzard decided to do things. It became known some time ago that Teldrassil would burn – a beta version on test servers and Blizzcon 2017 proved as much, but once again, the how was left out.

Fans came up with their own theories of course – Some suggested the Alliance burned Teldrassil in an attempt to blame and further vilify the Horde while others speculated that a third party interfered hoping to capitalize on the ensuing chaos and yet more suspected it could all have been a ploy in the end – But even if the Horde was ultimately responsible, players expected that something would have to force their hand, making it a regrettable tragedy for both sides, a no-win scenario that saw this as the least tragiv of the options. It was supposed to be a bit of a classic and very compelling ‘whodunnit?’ scenario players were eager to unravel…sadly for them, that’s not how it all turned out.

Now that the full story is known, players were absolutely enraged to find out that upon landing at Darkshore Sylvanas tortures a wounded ranger captain who defies her and won’t yield – upset by this and the realisation the Night Elves were still going strong she… well she tells her soldiers to burn the tree. That alone is of course despicable but she even makes that soldier she tortured watch.

Players were hoping for a big reveal, for a justification, even for an accident, but what they got was the lamest possible scenario – proof that Sylvanas and the Horde are plain evil. Not the justifiable kind of evil that everyone secretly kind of understands, but the Hollywood everything-is-black-or-white type thing that absolutely nobody enjoys.

The Horde was previously – though not exactly good – not evil per se. Horde players especially were completely flabberghasted at this terrible writing and unwelcome plot twist, and they weren’t shy about letting Blizzard know. 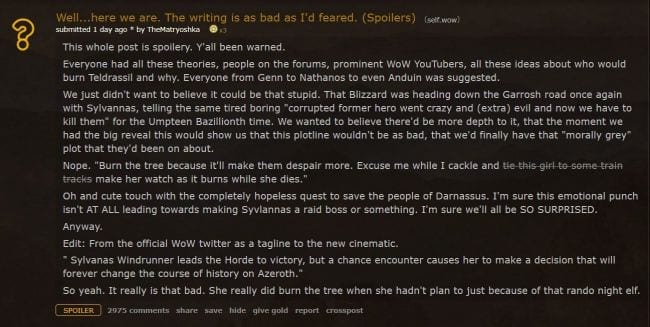 Previously, developers had denied that the Horde was outright evil – game director Ion Hazzikostas said at Blizzcon 2017 that Azeroth is “a world of grey, it’s never been a world of black and white” and explained that “there’s a lot of story to tell going forward.”

Now, Sylvanas herself is well-known to be a little closer to that ‘evil ideal’ as it were, but even then burning a city filled with children and innocents down for no reason is a different thing entirely. The whole questline still felt contrived, it sees characters act erratically and out of character – for example, Tyrande Whisperwind, a night elf leader and renowned guerilla warfare expert, only shows up during a battle for Darkshore to save Malfurion from certain death and then retreats to Stormwind, completely abandoning her people to their fate, even though she would have been well-capable of changing the outcome drastically.

Sylvanas herself is completely erratic too – her primary goal is to kill Malfurion, so far so good. Instead of doing that though, when she gets the chance she hands him off to an underling who lets him escape…and then Sylvanas just kind of move on and never really follows up on that little oversight.

Then there is the Horde council – not all of them are quite as evil-spirited as Sylvanas herself, in fact many of them are quite honorable – that apparently just stood by and watched. They didn’t interfere with the slaughter of innocents at all, apparently content to just let it all play out. In the 15 years since its release in 2003, Blizzard has been careful to position Horde and Alliance as opposing forces without painting either as outright evil – all of that work is now down the drain though, and players are left scratching their heads as to why they did it and what they were thinking.

Many Horde players are incredibly upset and since the storyline of the game is linear and doesn’t allow for player-input, are even considering switching sides. For those of you who play WoW, you probably realise what a big deal this is. It’s rare that long-time players would abandon their favourite faction, but far too many simply don’t want to support what Blizzard has Sylvanas do here.

There are also no signs of this issue being addressed any time soon – in fact the opposite seems to be true. For several months at least, Horde players will be stuck taking orders from a genocidal maniac, and even then there is no guarantee that Blizzard will do anything decent after this latest development.