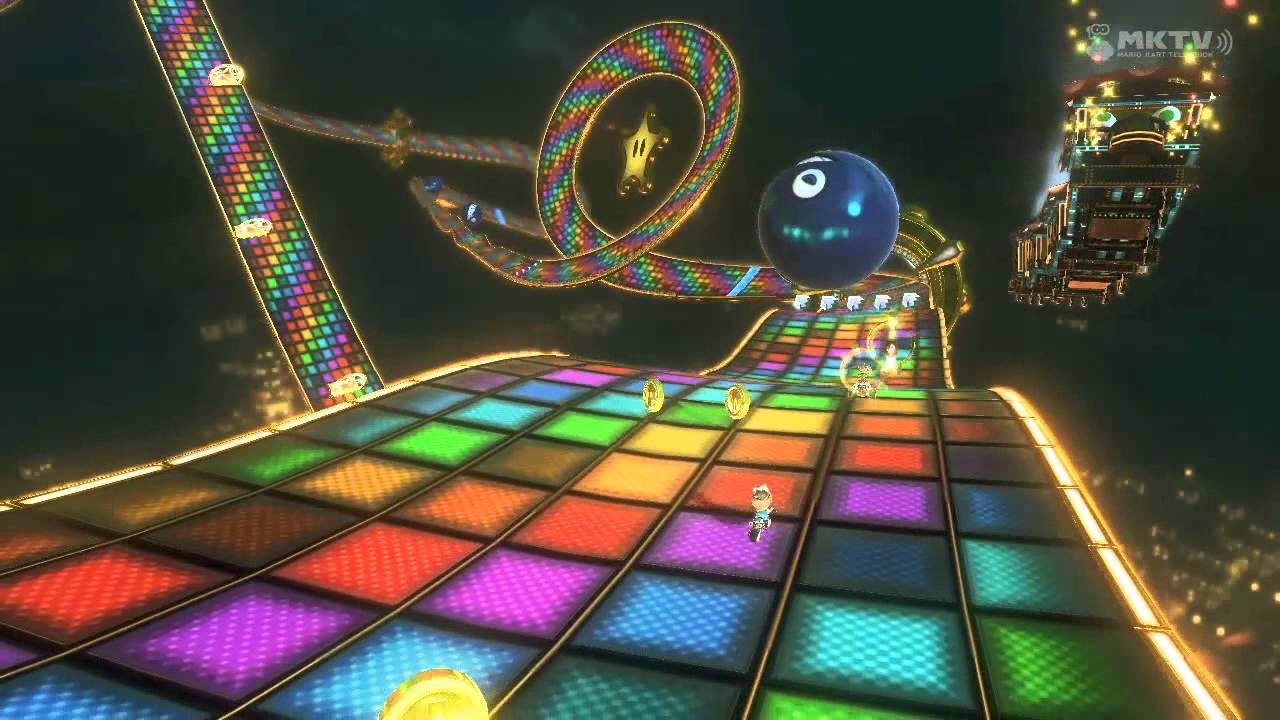 It’s a bit like saying Queen are the best band of all time – you can have a different opinion, but your opinion is wrong.

And one way racing games are so great is that they can be so many things to many different people; they can either push us further towards total realism with simulation physics and realistic cars, or give us a fantasy universe of spaceships, superweapons and irresponsible mushroom consumption. Mario has a LOT to answer to us millennials for…  Any racing game stands or falls on the tracks you compete upon. And for as long as the racing game genre has existed, fantasy tracks have co-existed alongside in a harmonious marriage. With all that in mind, here’s our ode to the best fictional racing arenas in gaming history – the ones so good, we’d love to see them constructed for realsies, no matter how unlikely that is of actually happening. Speaking of which… 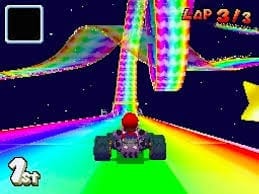 It’s a known fact that if you make a list with the words ‘fantasy racing game tracks’ in the title, you HAVE to include Rainbow Road. Doesn’t matter what the context of the list is, it’s Rainbow Road or your entire list is invalidated.  Unfortunately, given it’s basically an acid fever dream happening in space, this ranks low on this particular list because the only way this could ever get built for real is if Richard Branson and Elon Musk get drunk together and decide the next phase of their respective space travel operations is to build a giant go-kart track just north of Mars.  I mean, it could happen. SpaceX RaceTraX? Possibly.   They said other stuff in the last few years couldn’t happen, right? So at this point are you really telling me with a straight face that the chances of a rainbow-coloured racetrack being built IN SPACE are slim to none?   Alright, point taken. But still, it needs to happen. If only to shut up everyone who demanded this be on my list. 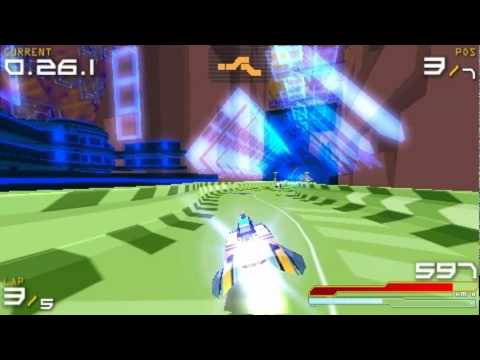 To be honest, this entry is technically me saying ‘I want the ENTIRE Wipeout universe to be real, damnit’. But until anti-gravity racing between rocketships armed to the teeth with missiles and smartbombs becomes an actual thing (c’mon, you’d rather watch that than a weekend of F1, right?), we’ll settle for this one track.   It combines the classic Wipeout formula of hyper-speed and technical collections of corners in quick succession and incorporates a unique rooftop setting as you speed across the tops of skyscrapers, office blocks and urban citadels. Sure, the twenty-storey drops might be a bit of an issue to navigate in a regular car, but you can’t deny it; the Parkour GP would be amazing. 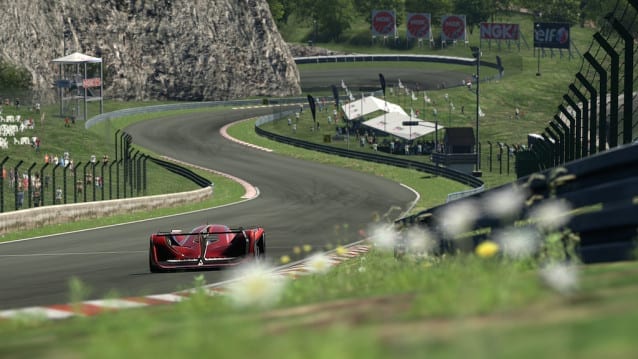 When the GT franchise started out in 1997, it was pitched as the most realistic racing game ever to hit consoles. Except whilst real-life cars were easy to license and put in the game, real-world racetracks were more difficult.   The solution was to create fictional racetracks that felt like they could believably be real, which lead to classics of the series like Apricot Hill, High-Speed Ring, Grand Valley, and this. The first track I EVER drove on in any Gran Turismo game, it’s a testament to the design of this track that if you didn’t know better, you’d assume this was a real track from somewhere in the world.   Sadly, it isn’t – so let’s rectify that, shall we? 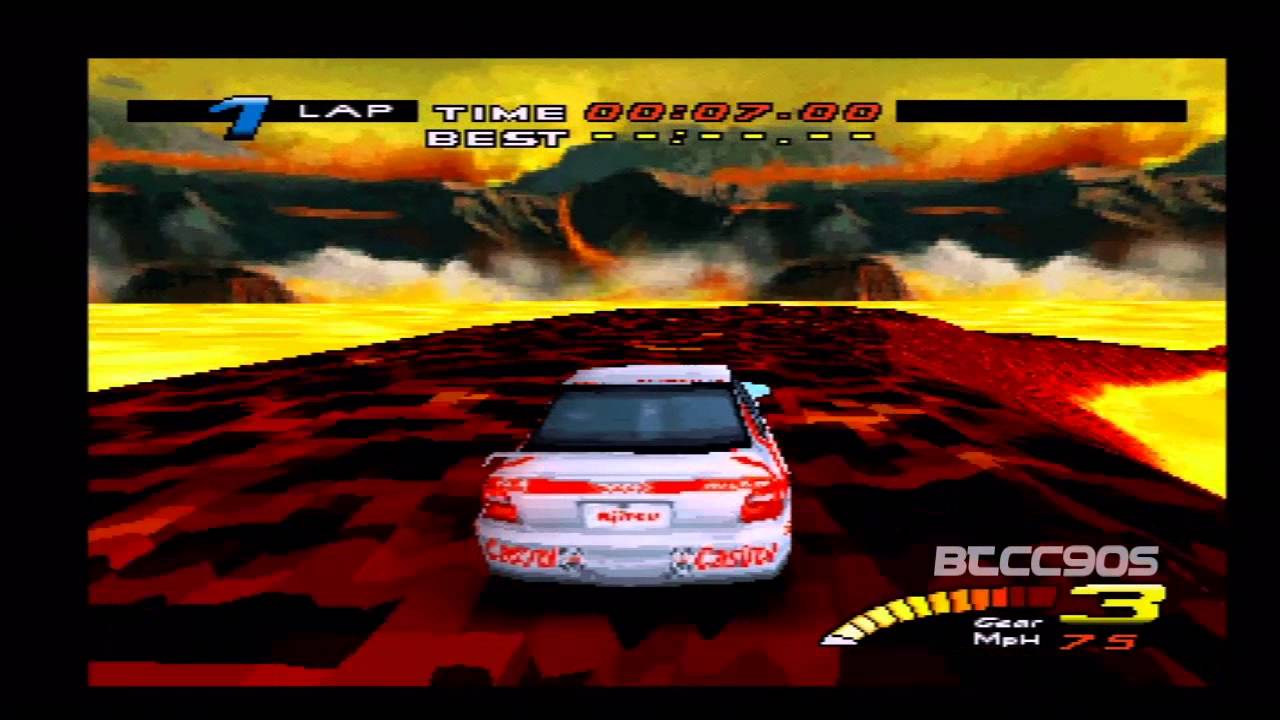 Okay, so this suffers slightly from the same problem Rainbow Road had in that, short of actually descending into the depths of Hell (seriously, the location of the track is listed in-game as ‘Hades’), building this track for real would be quite a tough ask. And given the only run-off areas would be flaming pits of doom, I’m not sure many race drivers would volunteer to drive on it, either.   But come on, when the stakes involve suffering the same fate as Arnold Schwarzenegger in Terminator 2, you’d never see a race with drivers more focused than this one. And once you unlocked this track in-game, there was no better way to get revenge on drivers who had ruined your last Career Mode race than punting them off into the flaming abyss. See you in hell, Jason Plato. 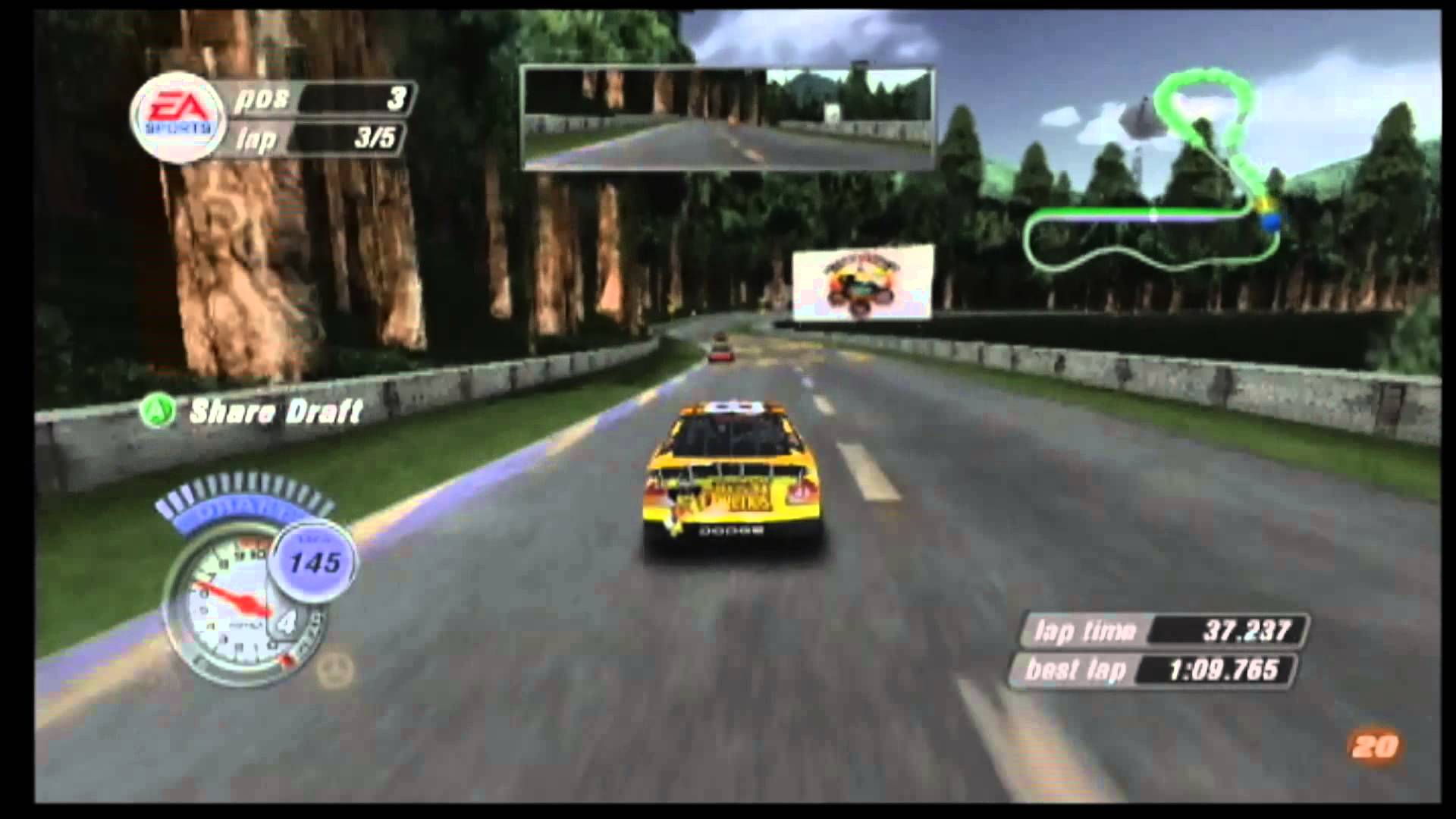 I’ll just admit it – I like NASCAR. But even I can admit their oval racetracks aren’t for everyone – I mean, when a track only has two corners, and both of them are left turns, that can be a hard sell for some people.  Perhaps that’s why the EA Sports officially licensed NASCAR games of the mid-2000s always had some really neat fictional tracks in their ranks, with this fun circuit from NASCAR 07 that literally winds through a mountain range being one of the picks of the bunch. It also features an epic pit complex mined into an underground tunnel, like you’re in a James Bond villain’s headquarters and their henchmen   Honourable mentions also go to Dodge Raceway Stadium (NASCAR 05) and Big Sky Raceway (NASCAR 2000) as other examples of EA Sports’ excellent fictional track designs in the early-to-mid 2000s. In fact, given what they did with NASCAR, can we just hire EA Sports to build new F1 tracks from now on? Actually, that’s a bad idea, given they’d probably keep Sector 3 back as paid DLC and charge microtransactions for every pitstop. 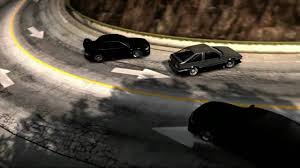 Forza Motorsport has acted as a great rival to Gran Turismo since launching in 2005, and though it arguably now does many things better than ‘The Real Driving Simulator’, fictional tracks hasn’t been one of them. Here’s an exception though – an absolute BEHEMOTH of a course stretching across 10.2 miles of enthralling Japanese mountain roads. It’s basically drifter paradise.   It takes inspiration from real-life Japanese public roads which saw the rise of drifter culture and togue racing, as seen in Initial D. So while Kaido itself doesn’t exist IRL, Japan itself is littered with roads like this; and this monster circuit exists as a love letter to those amazing stretches of tarmac. The true version of Kaido is out there, racers…   *X files music plays* 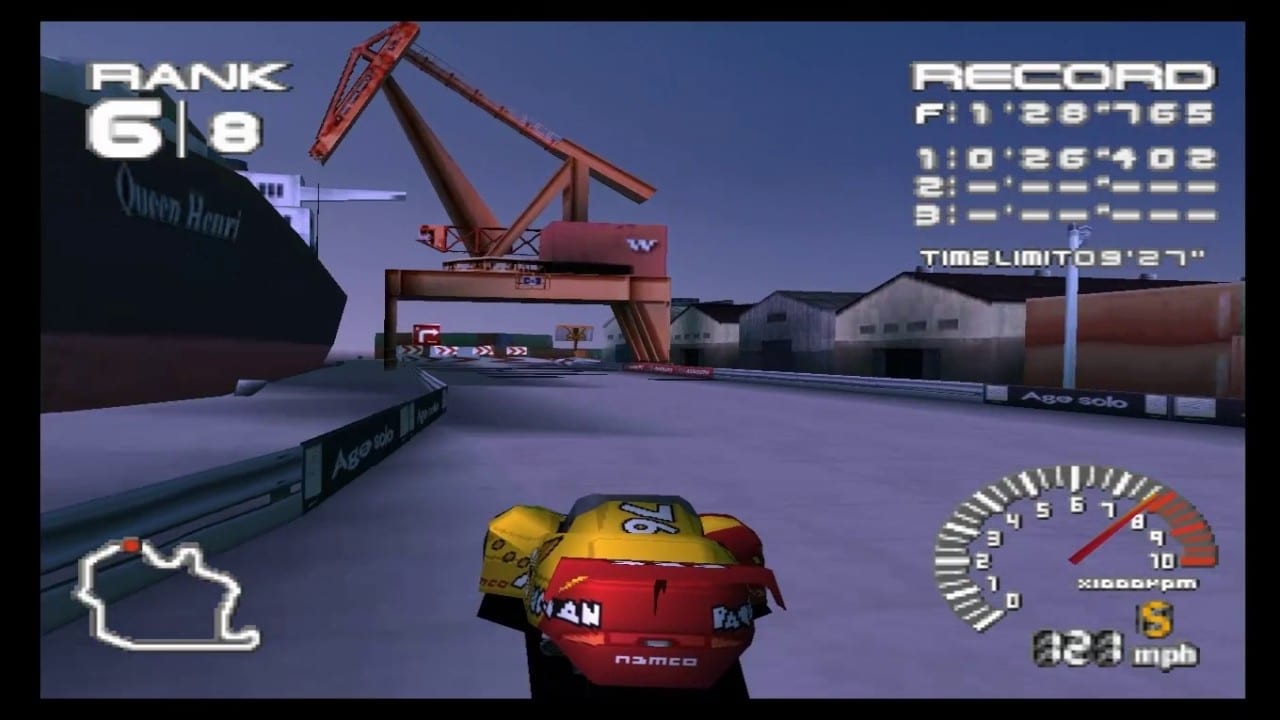 Racing around city streets is fairly de rigour in racing games, both of the illegal variety like Need for Speed and Midnight Club, or in the legitimate lets-close-down-half-the-city-so-we-don’t-destroy-any-innocent-taxis kind. There’s plenty of examples of the latter in gaming history, including Shibuya from Race Driver:GRID and Special Stage Route 5 from Gran Turismo, but my pick is from Namco’s 1998 arcade racing classic.   It’s a technical masterpiece flowing along freeways, through floodlit tunnels and even featuring a start/finish straight section that runs across an active airport runway. The Formula E Championship specializes in street tracks in major world cities – one like this would be a nightmare to organize, but an amazing spectacle for racing. 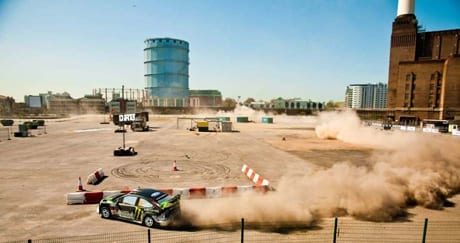 ‘Hold on’, I hear you exclaim from behind your keyboards, ‘the Battersea Power Station is a real thing, right?’   Yes.  ’So what the hell is it doing here?!’   Well, here’s the thing. In reality, the former coal energy station has gone from imposing part of the South London skyline to a luxury apartment complex. And I think the DiRT games had the right idea; using the ‘Temple of Power’ as an enormous petrolhead playground full of stunt jumps, ramps, and multi-tiered sideways shenanigans.   Maybe once the property developers and iPhone designers move out again in the future, there will be a chance to implement this vision once and for all, and Ken Block can watch his grandkids hack autonomous cars to drive everywhere at 45 degree angles with tire smoke filling the famous chimneys like a Pope inauguration.   Not sure where I was going with that, but you get my point. 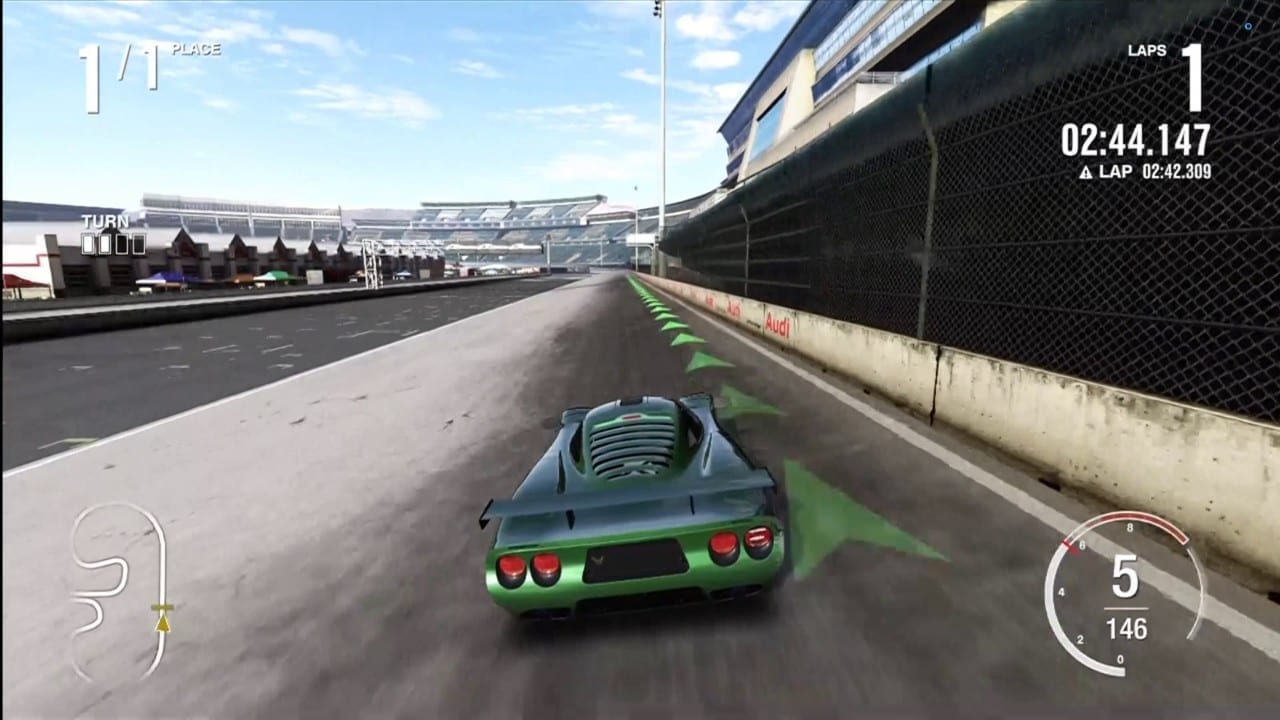 Remember what I said earlier about NASCAR? How about we combine the best of both worlds – a high-banked NASCAR coliseum AND a twisty technical road course all in one behemoth of a race circuit?   Other games attempted this before, such as Chatham in Sports Car GT and Red Rock Valley in Gran Turismo 2, but Turn 10’s masterpiece blows everything else away with a layout that branches off, loops underneath the back straight of the oval, and out into the desert for a gorgeous, flowing marvel of a racetrack before rejoining the oval to complete the lap at full speed and maximum adrenaline.   Interestingly, ‘rovals’ (road-ovals, GETTIT?!) do exist IRL, with Daytona International Speedway’s road course probably the most famous as it plays host to the Rolex 24 Hours endurance race every February. But there’s nothing quite as epic as Sedona – which is why there needs to be. NEEDS TO BE, DAMNIT.   However, remember what we said about Forza’s great rivals? 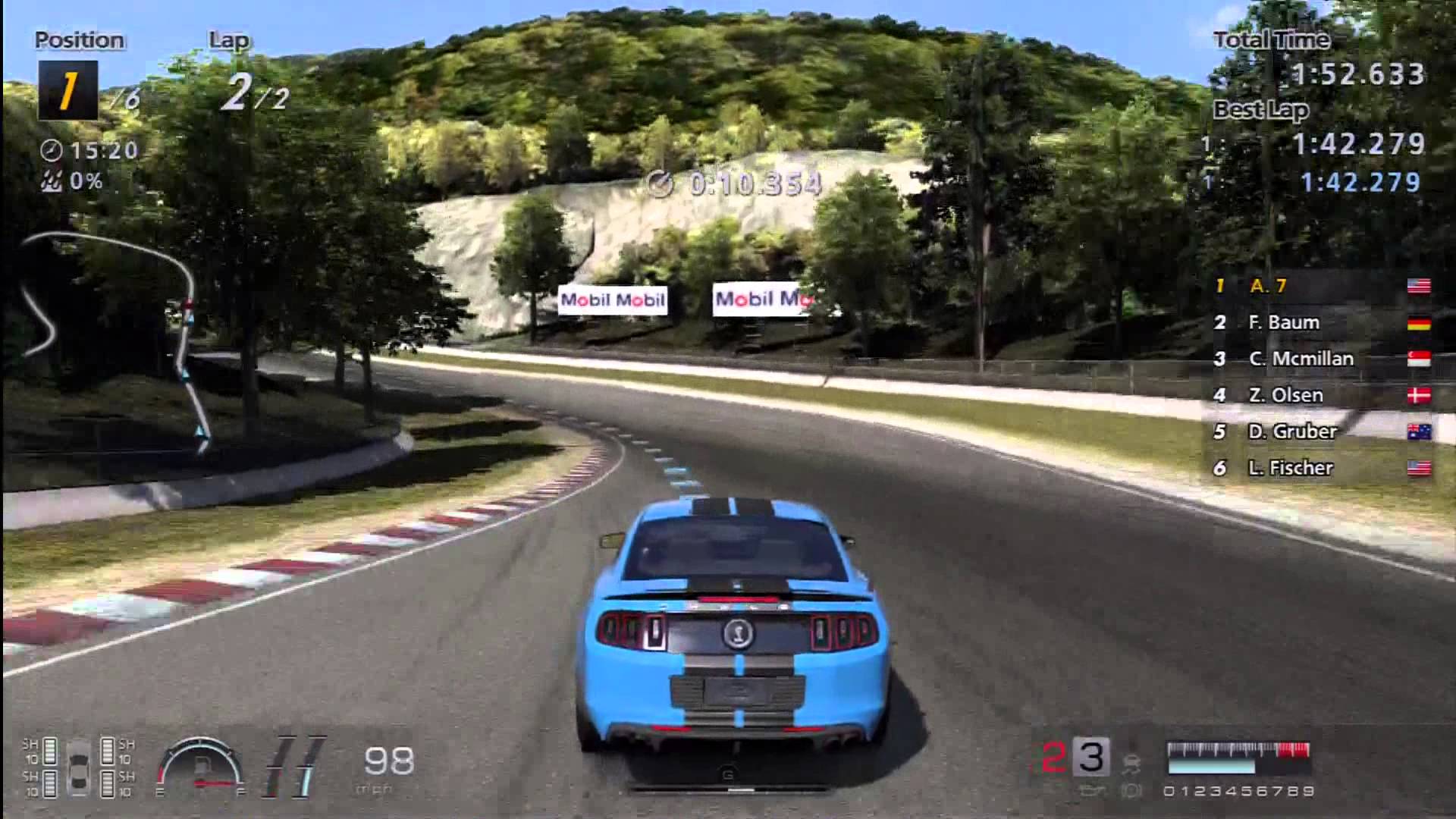 This list was always going to be topped by one of Polyphony’s magnificent fictional creations – the question was always which one.
Seriously, this track has EVERYTHING. A challenging layout, elevation changes, tunnels, sheer rock faces for barriers, huge amounts of trees and vegetation, grandstands carved into sodding ROCK FACES, and a final chicane which sent cars flying through the air if you got the angle right – don’t lie, EVERYBODY had their Dukes of Hazzard moment here at least once.

It’s more of a staple of the Gran Turismo franchise than fries at McDonalds and John Cena in WWE, and of my many races in these games, some of the most exciting and dramatic happened right here. It probably helps that this track was used as an entry-level endurance race in many of the earlier games; having an epic race with only mid-level Kei cars and sport compacts is Gran Turismo at its finest, and the flowing layout of Trial Mountain served as a brutal baptism of fire – the moment the ‘Real Driving Simulator’ got very, VERY real.

Yes, there is a big irony to that statement given this track doesn’t exist for realsies. And that’s exactly why it should. And if someone does make this a reality, you can forget your Bathursts or Nurburgrings – this would be the king of the mountain. Literally.

Bonus points if you found the bird sitting in the tree on the back straight in Gran Turismo 3, too.

Got other choices for the best fictional race tracks in gaming history? Of course you have; even though I did include Rainbow Road so technically this list is perfect. But you’ll disagree. So let us know your choices for fake tracks made real in the comments section below.

Gran Turismo 7 Will Only Feature Ray Tracing During Replays

Ubisoft Could Rename Rainbow Six: Quarantine Due To COVID