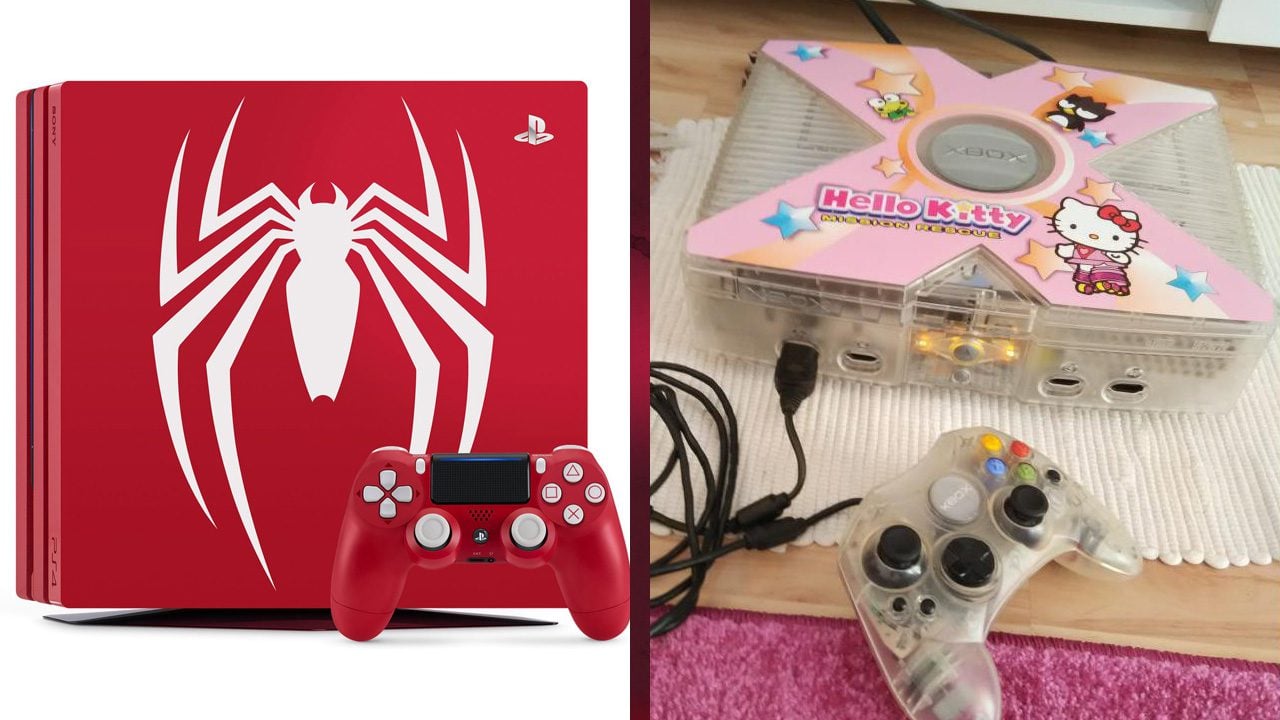 Modern console designs are great and all, but there’s something special about a limited edition run. Whether it’s to celebrate the love for a particular franchise, or just an incredible livery, limited edition consoles can be the pride of place in an entertainment setup.

As we enter into a new generation of consoles, we can’t wait to see what new designs Sony and Microsoft come up with. So far, we’ve only seen the Halo Infinite 20th anniversary edition for the Xbox Series X. With a stunning navy and gold design, that got us thinking about the other striking console designs we’ve seen over the years.

Here’s a roundup of five all-time great limited edition consoles. Be warned, some of them are more normal than others.

When Spider-Man swung onto the PS4, he certainly turned a few heads. The stunning recreation of New York City was a joy to swoop around, making for 2018’s most enjoyable games, if a little formulaic.

What wasn’t formulaic, however, was the special edition PS4 Pro console that launched alongside the game. A striking scarlet red, you can’t miss this console when it’s sat beneath the TV. It’s emblazoned with the stark white spider emblem of Insomniac’s Spider-Suit, a design language that carries over to the accompanying controller. The DualShock 4 hosts a similar tomato red appearance, though it’s accented tastefully with snow white triggers, sticks, and face buttons.

Especially when mounted vertically, the Spider-Man PS4 Pro is easily one of the most gorgeous limited edition consoles of the last generation. Especially for Marvel fans out there, I can see this one becoming a collectors item a few years down the line. Maybe when the PS4 is eventually considered ‘retro’, though that thought has me shuddering.

Now that we’ve looked at a console that was widely available, let’s look at something more obscure. The Hello Kitty variation of the original Xbox was first thought to be an April Fools joke. Alas, it was not. This awful looking console was only released in Singapore in 2005 and could only be obtained by those who purchased a ridiculously expensive TV from a particular retailer.

Internally, it was exactly the same as a normal Xbox, but it was encased in a ‘crystal’ plastic. That means the outer case was clear, letting the owner peer into the inner workings of the gaming machine. On top, a gaudy pink X accented unit with graphics of the kids show ‘Hello Kitty’ also adoring it.

The console came bundled with a copy of Hello Kitty: Roller Rescue, a 3D action platformer that was also released on the PS2 and GameCube. If you happen to own one of these, then you’re incredibly lucky. Only 550 units were reportedly manufactured, making them incredibly rare. As rare as it is, though, I still don’t think I’d like to display this monstrosity in my own home.

A console that’s much more visually appealing is the Pokemon Stadium N64 variant. This incredible limited edition was released at the turn of the millennium, releasing in Japan, North America, and Europe in Winter of 2000. It was an especially wide version of the N64, elongated to make room for a 3D Pikachu that stood out from the unit.

Nintendo integrated the console’s buttons into parts of this 3D Pikachu. Pressing their foot would reset the console, while the power button was disguised as a Pokeball. There were two different colour options for players to choose from. A blue one came with yellow accenting, while the other option swapped the colour scheme around.

I can’t imagine Nintendo getting so adventurous with their custom designs of the Nintendo Switch. However, this wacky N64 must have been a dream possession for the Pokemon fans out there.

Emulating the look of an early 2000’s CD player, the Panasonic GameCube looks like an absolute nightmare to keep clean. Although the glossy front panel looks sleek and premium, it also looks like it would attract fingerprints immediately.

It was also extremely expensive, too. While the original GameCube retailed for around $200, Panasonic pitched this for around 40,000 yen, which is about $365 in today’s money. Still, given that DVD players probably cost around $150 in their infancy, that doesn’t seem like too much of a premium. I still wouldn’t own one, though. Keeping that thing clean would be far more hassle than it’s worth.

All of the consoles we’ve discussed so far have been publically available at one point or another. How about a console that’s so limited that only one was ever made?

In 2009, THQ released a game for the Nintendo Wii called Big Family Games. It was essentially a poor mans Wii Sports, featuring all sorts of wacky carnival games that involved the Wii’s motion controller. In an effort to earn the game some coverage in the press, THQ decided to commission a golden Nintendo Wii and send it to her Majesty, Queen Elizabeth II.

Sadly, the Nintendo Wii never actually made it to the Queen. It turns out that security is rather tight at Buckingham Palace – who’d have thunk? As such, the Golden Wii ended up getting lost to the aether for a number of years. That is until it resurfaced in the hands of a Dutch game collector, as discovered by People Make Games. There, the Golden Wii is displayed proudly in a glass cabinet, right alongside a copy of Big Family Games.

Just like the Panasonic GameCube, the gloss finish means that it’s likely a nightmare to keep clean. Regardless of it’s visual appeal, though, it’s undoubtedly a cool story behind an otherwise mundane console. It actually went on sale fairly recently in an online auction.

What are some of your favourite limited edition consoles? Let us know across our social channels!