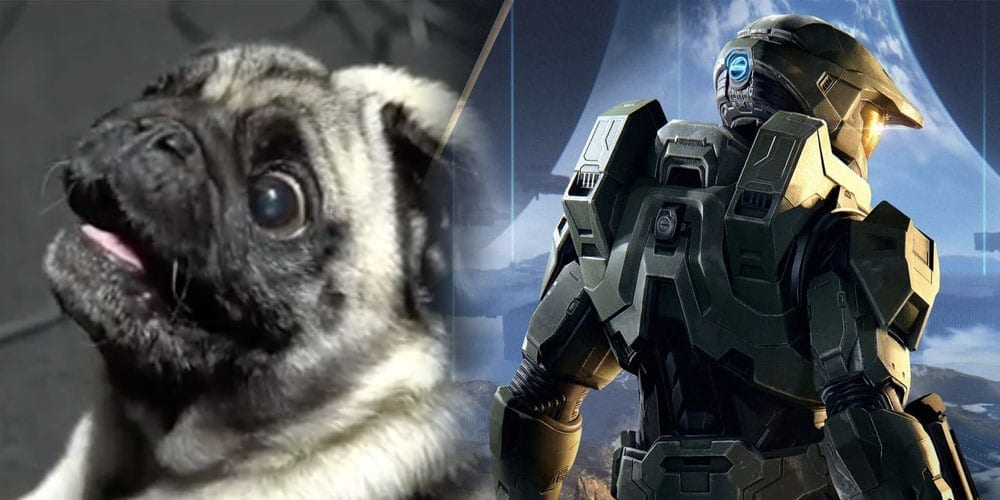 In today’s episode of Wholesome Gaming News, it’s been announced by the company behind the popular Halo franchise that they’ve currently brought a pug on board to help out with some of the alien sounds for the game.

Gyoza The Pug was introduced to fans on Halo’s official Instagram account, and she looks like a very good girl. In fact she’s such a good girl, that she’s helped out the studio by suppling grunts and huffing and puffing noises to make the aliens sound a bit more interesting.

Writing on their social media, Halo captioned the post: “Meet our favorite pug, Gyoza. ??
The best friend of our studio’s Technical Art Director, his grunts, breaths, and excitement are sure to make for some… interesting sounds in #HaloInfinite.”

While it was originally posted on their social media in August, it seems like only now people are truly getting excited about the prospect of the news of the latest edition to the cast.

According to MSPower, they believe that her little grunts will likely be used for a villain, but I’ve also seen speculation going around that he could be lending his voice to a potential animal companion in the game.

Xbox Studios head Matt Booty recently gave some insight on where Halo: Infinite’s taking the series in a new interview.

Halo: Infinite is aiming to be bigger than anything else in the series so far.  In his interview with Game Informer, they asked him what he thought of the game at present.

“It is a great part of my job to be able to work with [343 Industries], and get previews of things,” Booty says. “I think the first thing that is just very cool in where that game is headed, is how they’re thinking about expanding the world. I won’t go so far as to say ‘sandbox’, because you bring up sandbox and people sort of overload that term with a lot of other things. But what the team is doing to build a bigger universe and a bigger set of gameplay scenarios and just more things to explore, is awesome. The things they’re working on are really cool.”