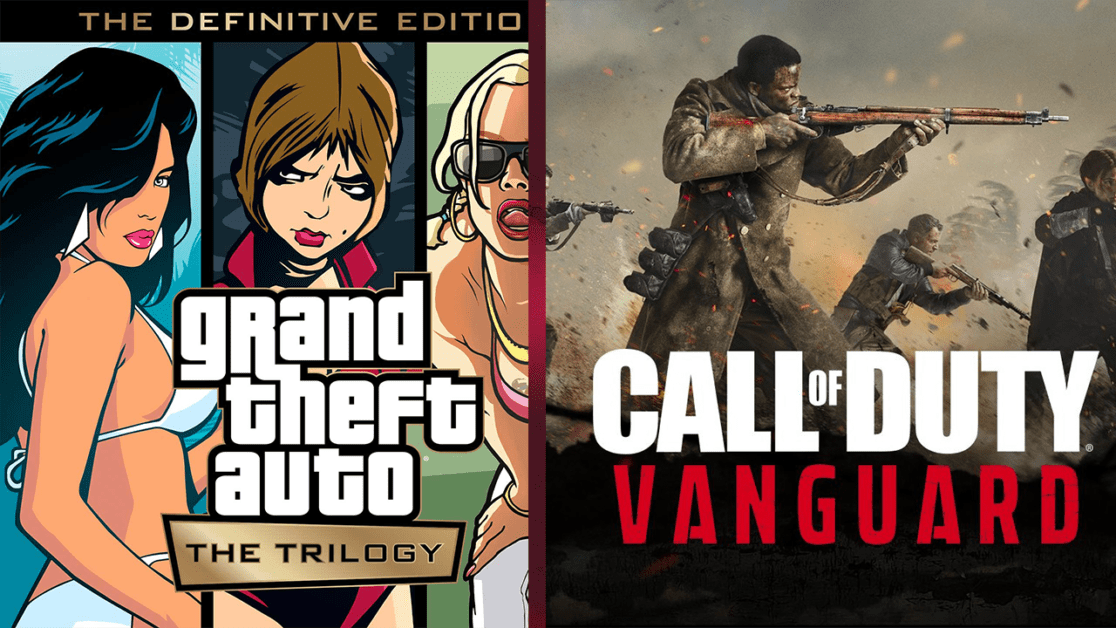 Another month, another 4 weeks of the year filled with spectacular game releases. November is known for Black Friday deals. Nevertheless, it’s also another 30-ish days featuring big triple-A titles coming to console and PC alike. So, let’s take a look at the 5 biggest November game releases.

What’s more, these new games can be bought at the GameByte Shop. If you sign up and create an account when ordering, you can start to earn GameByte Loyalty Points, which you can redeem for discounts on future orders.

Call of Duty, gaming’s definitive first-person shooter series is back. This time, in a new promised epic that spans across the Second World War. In what Activision says will be the best WWII game yet, Call of Duty: Vanguard will take you across the most influential battles across the Eastern and Western fronts, North Africa, and the Pacific. Those pining for a grandiose campaign before they dive right into the campaign surely won’t be disappointed!

Speaking of multiplayer, Call of Duty: Vanguard aims to provide an-out experience which pleases all with 20 maps to enjoy from day one. Furthermore, there’s new modes to engage in, like the multi-arena survival mode, Champion Hill – needing you to combine tactics and strategy like never before!

Of course, Call of Duty zombie fans won’t be disappointed either. Vanguard’s iteration of the Zombies mode assures to add extra depths of replayability with the addition of other worldly powers, global progression and brutal environments. Fighting off hordes of the undead seems like it will be more fun than ever. There’ll even be some Call of Duty: Warzone integration as well!

Playground Games is back with their latest and what’s hoped to be their greatest racing game yet: Forza Horizon 5. In an open world environment set in a fictional take on Mexico, Forza Horizon 5 has been said to have one of the most diverse sets of maps in the series to date.  Likewise to active volcanos, Mayan temples, beaches, jungles, and beautiful cities, this striking yet beautiful world is free to explore in hundreds of the world’s greatest cars – made all the more breath-taking by its new weather system.

Along with an immersively deep campaign, Forza Horizon 5 will also let you team up with other players for exciting and over-the-top challenges. Create custom races, challenges, and stunts, as well as customising your cars, to put you and your friend’s driving skills to the test.

Forza Horizon 5 is available to buy now at the GameByte Shop for just £50.95.

Grand Theft Auto: The Trilogy – Definitive Edition will be out digitally on PS5, PS4, Xbox Series X/S, Xbox One, Nintendo Switch, and PC on the 11th of November.

However, if it’s the physical version you’re looking for, the GTA Definitive Trilogy is available to pre-order now at the GameByte Shop on PS4, Xbox One, and Xbox Series X for £47.95. This physical edition will be released on 7 December.

We’ve already talked about a remaster. Now, it’s time for a remake. Reimaginings of the captivating 2006 adventures on the Nintendo DS, we have Pokémon Brilliant Diamond and Shining Pearl on the Nintendo Switch.

Whether you’ve played the original games or are ready to set into the lush Sinnoh region for the first time, these grand adventures look to be even more wondrous than they seemed 15 years ago. Once again starting with Turtwig, Chimchar, or Piplup, you’ll journey through Sinnoh’s captivating lands and cities. Catch Pokémon, thwart Team Galactic and become Champion of the Pokémon League. All whilst exploring the region’s many myths that have been passed down through the ages.

Along with Sinnoh’s revamped treasure-and-fossil-rich underground, there’ll be Super Contest Shows. Similar to Hoenn’s Pokémon contests, Super Contest Shows are put on by performers and their Pokémon to work together, dance, and amaze with their skills – all which you can do locally or online!

Pokémon Brilliant Diamond and Pokémon Shining Pearl are available to buy at the GameByte Shop for just £43.95 each. On the other hand, for just £2 more, you can buy a special bundle. These each features a Dialga/Palkia figurine and double-sided poster, only for £45.95.

Courtesy of an extra delay, November’s become quite the month for 2021 shooters. In Battlefield 2042, developer DICE says you’ll experience gameplay like none before with its ever-changing world. With that, they not only mean in all-out warfare with up to 128 players. The team behind the EA-published shooter also means you’ll have to adapt on-the-fly to dynamic storms and environmental hazards which can strike at any moment. In signature gameplay modes like Conquest and Breakthrough, these weather events from Hell go hand in hand with Battlefield’s iconic blend of destruction.

For those who like to mix the old with the new, the Battlefield Portal is definitely one to play. In Battlefield 2042, you’ll be able to create custom matches mixing weapons, soldiers, and maps from various past games. Battlefield 1942, Battlefield: Bad Company 2, and Battlefield 3 will be at your disposal to make 2042’s gameplay as off-the-wall as you like.

Battlefield 2042 is available to buy now at the Gamebyte Shop. Xbox One and PS4 versions are available for £47.95 and £49.95 respectively. Meanwhile, the PS5 and Xbox Series X versions will be available for £54.95.

That’s a wrap on the 5 biggest November game releases. Which one are you looking forward to the most? Something not on the list? Be sure to let us know, or check if it’s available to buy right now at Shop.GameByte.com.

You can see some of the other big releases happening in November by checking out the list below.