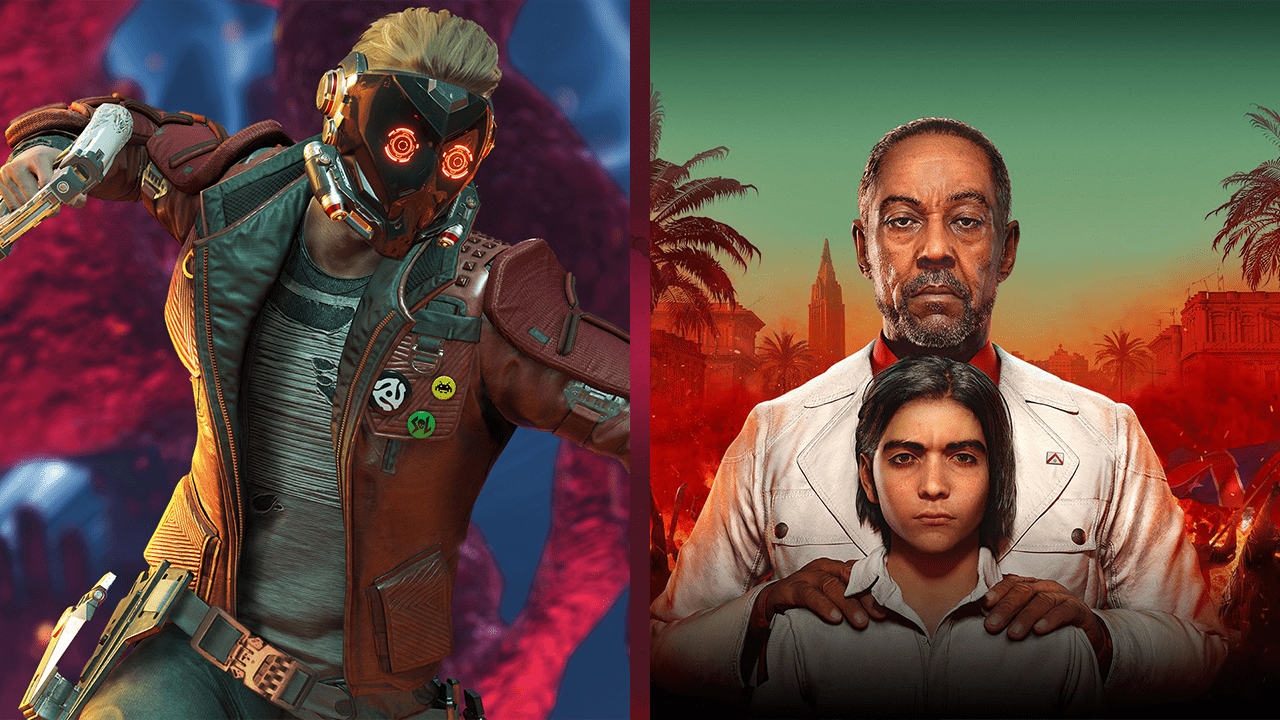 Like many in 2021, October is a month stacked with big game releases. Spoiling you for choice, there seems to be a fantastic variety of triple-A titles ahead for all manner of gaming tastes. From football fun to spacemen with guns, here’s a handful of the big games coming out in October to consoles.

All of these games, along with many other of the latest and upcoming releases, are available to buy now at the GameByte Shop. Sign up free of charge before ordering, and you can start to earn GameByte Loyalty Points, which you can redeem to save even more money on future orders.

The biggest football series in gaming is back with tweaks in its development to truly make the FIFA experience one “powered by football”. Among what’s new is the Career Mode’s Create A Club feature. Letting you live the dream of being both a football player AND manager, you’ll be able to build and tailor your own club from the ground up, with a deep level of customisation options – including your kit, crest, and stadium.

FIFA 22 looks to bring innovation to the game no matter which way you play. When on PlayStation 5 and Xbox Series X, players will be able to experience the virtues of HyperMotion Technology. With it, FIFA 22 has been integrated with “Advanced 11v11 match capture” – adding over 4000 new animations from real-life matches. Combined with other improvements like goalkeeper rewrite, real-world ball physics, one-on-one explosive sprint, and new attacking tactics, the latest in the hit football franchise promises to make you feel like you’re more on the pitch than ever before.

FIFA 22 is available to buy now at the GameByte Shop. You’ll find it available for as low as £54.95 on PlayStation and Xbox consoles, and £30.95 on Nintendo Switch.

In Far Cry 6, it’s time to become a guerrilla solider and stoke the fires of revolution. The game is set in Yara, a Caribbean land frozen in time yet simmered by the flames of war. In despair at the hands of ruthless dictator, Antón Castillo, it’s up to you as Dani Rojas to join the fight to liberate Yara and her people.

We’ve seen A LOT of marketing for Far Cry 6 over the past year; like, a trailer at every event possible kind of marketing. When you’ve got award-winning actor, Giancarlo Esposito (Breaking Bad, The Mandalorian, The Boys) as Castillo, being the villainous face of your game, it’s not hard to understand why. Far Cry as a series has frequently put its antagonists on centre stage over the years. Esposito, though, seems to have brought a dramatic intensity we don’t often see in video game villains.

The only element of Far Cry 6 more explosive than Giancarlo Esposito’s performance is the gameplay itself. Within the battle-torn island of Yara are the means to arm yourself with a wicked variety of unique and improvised weaponry. From golden machine guns to modified sardine cans and CD disc launchers, you’ll bring a new meaning to the word “mayhem” as your try to tear down Anton’s regime how you see fit.

Kicking the bar left by other games with animal companions up a notch, Far Cry 6 will be joining you with a trio of adorably deadly critters for an appetite for violence. Chicharrón the punk chicken, Chorizo the sausage dog, and Guapo the crocodile: all three will make melt your heart whilst they tear apart the bodies of others.

The spiritual successor to the classic, Left 4 Dead, Turtle Rock Studios has sought to capture us that same co-op zombie-killing magic in Back 4 Blood. Although zombies have been replaced with the similar-yet-parasitic infused “ridden”, Back 4 Blood looks to bring back the same brilliant mayhem that comes with 4-player shooter co-op. Through the perilous story campaign, you and up to 3 of your friends must work together to survive the waves of undead in increasingly challenging missions.

What’s more, you can join the PvP mode to try and eat/shoot at your friends instead of fighting alongside them. In Back 4 Blood’s competitive multiplayer, Swarm Mode, up to 8 players go head to head in 4v4 matches. Playing as the human Cleaners or varied types of the Ridden, you’ll thrill in the chaos and and perfect your skills with the unique weapons, abilities, and perks on both sides. In fact, we even have 5 tips on how to stay alive for longer in Swarm Mode.

Back 4 Blood’s gameplay is made even more interesting in terms of replayability. Courtesy of the new “rogue-lite” Card System, Turtle Rock Studio is aiming to add a unique level of customisation for the player. With various granting buffs or debuffs to you or your enemies, you can build custom decks to give you the ultimate advantage via stat bonuses. In addition, there’s Back 4 Blood’s AI, known as “The Game Director”. This AI will implement new cards according to your actions – keeping fights exciting, diverse, and more challenging every time.

We’re carrying on the countdown to Halloween with some extra horror goodness. This time, it’s with the latest in the Dark Pictures Anthology series by Until Dawn, developer, Super Massive Games. Following in the footsteps of Man of Medan and Little Hope, The Dark Pictures Anthology: House of Ashes is a survival horror interactive drama. Taking place in 2003 during the Iraq war, you’ll find yourself fallen underground in a Mesopotamian temple. Thanks to the fighting above, you’re now trapped with ancient unearthly monsters as well as your enemies. To survive the night, you need to put your personal vendettas aside and work together.

With a familiar frame of storytelling in an interesting new setting, House of Ashes looks to continue the series’ talent for intense, cinematic storytelling. The choice-based narrative can be made all the more thrilling with House of Ashes’ options for multiplayer as well. Not only can you experience the story with a friend online, but there’s also Movie Night mode. Letting up to 5 offline friends play together, you have to pass the controller to work together for survival. Whether you prefer to play alone or with company, House of Ashes seems to be an exquisite fit for horror fans this October.

5. Marvel’s Guardians of the Galaxy

Eidos-Montréal, one of the teams behind Marvel’s Avengers, is back with the single-player and story-driven Guardians of the Galaxy. In this action-adventure, we’re meeting the Guardians members we’re familiar with, but are different to those from the films. In a third-person perspective, you control Peter Quill/Star Lord leading the band of rogues in and out of combat. Following its announcement at the start of Square Enix’s presentation during E3 2021, impressions were initially sceptical. However, as we’re getting closer to release, recent previews have found critics wanting more.

GoTG has you playing only as Peter Quill, armed with elemental ammo dual pistols and signature abilities. However, the multi-layered combat has you coordinating with your AI teammates to execute quickfire commands. Making the most of each Guardians’ unique skillsets is key to achieving victory. This goes in hand with their individual traits in combat, reacting to the situation at hand depending on their personalities. The real fun seems to come from your quick-snap decision making to best use your fellow Guardian’s special powers. So, this adds a sweet layer of strategy in the midst of the chaos. The huddle mechanic also sprinkles in that extra Guardians twist. Huddles give you the chance to stat buff up your team if you select the right dialogue options. The cherry on top is you returning to battle with a random 80’s soundtrack from Star Lord’s playlist blasting in the background.

This being a different universe’s Guardians of the Galaxy, the 2021 game will offer up an interesting new take for fans. That’s especially for those who’ve never ventured outside of the Marvel films, who are still after that same tone. Whether in witty one-liners during battle or on the Guardians’ ship, the Milano, the games’ writing appears to be laced with a engaging interactions with a selection of humour featuring something for everyone. Comparable to other RPG’s like Mass Effect, you’re even able to take time in-between missions to engage in optional conversations that will bond you further with your crew.

Between the high-octane action are numerous puzzles to be solved as well. Having you consider the right abilities of your team to solve the problem at hand and move forward, Guardians of the Galaxy looks to try and switch things up when it can. As a result, you’ll hopefully never grow weary of this familiar yet excitingly new adventure.

Guardians of the Galaxy launches on the 26th of October. Available to buy at the GameByte Shop, you can pre-order your own copy from just £46.95 on PS4, PS5, and Xbox.

Which game are you most excited for this October? Something else different than what’s on this list? Let us know across our social channels!

Women’s Football Will Finally Be Included In Football Manager

“Super League” Clubs Rumoured to be Cut From FIFA 22