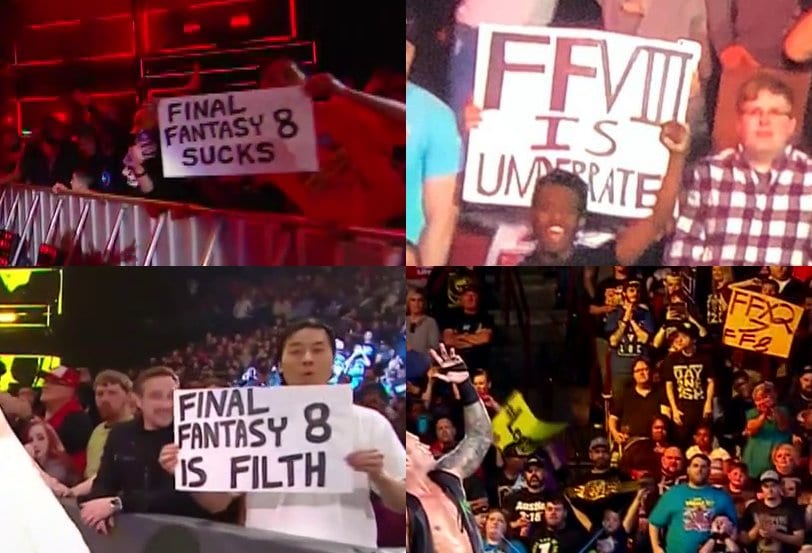 A sinister war is raging right now in the world of pro wrestling against video game RPGs. No one knows why this is happening, but will this blasphemy ever end?

Just heads up, this article is likely to trigger the best of us, like Triple H being ejected from a building.

No one knows when this war truly began. It could have begun why before we were a twinkle in anyone’s eye. The war could have spawned before the RPG genre ever entered the world of video games. Heck, this war could have even begun before D&D was ever invented.

why is this happening?

Truth be told, none of us know the answer as to when it started and none of us knows when this tyranny will ever end. But BY GAWD! Will somebody stop this damn war?!

It doesn’t matter if it’s WWE, AWE, NWA, ROH, or even an indie show in your street, no pro wrestling show is safe, no one is exempt.

While these are by no means recent shows, fans on Twitter have been posting images as early as this week. We can see a fan parading the message “Final Fantasy 6 Still GOAT” behind the UK’s “National Treasure” Nick Aldis. Truly disgraceful.

We can see WWE Shows before the global pandemic with inciting messages that reads “Final Fantasy 8 Sucks” and “Final Fantasy 8 is Filth”. Thankfully there seems to be at least one individual defending the honour of FF8 holding the sign “FF VIII is Underrated”.

Even “Hangman” Adam Page isn’t safe! Adam Page looks to be lined up as the next challenger for Kenny Omega’s AEW World Heavyweight Championship and the last thing he needs right now, is opinionated fans distracting him from what is important. Please, just let the man focus on his career!

I could go on and on about this sickening war against RPGs, which oddly seems to be mostly targeting those made by Square Enix. However, arguably the most sickening and heinous act of them all, is a “fan” parading a sign next to beloved WWE Superstar, Asuka, which reads “Kingdom Hearts Sucks!!”.

This slanderous act against Kingdom Hearts hits a little close to home because I know how much this series means to at least one of GameByte’s team members. You know who you are, and I know this one will touch a nerve. So I am always here if you need to talk.

dont know if this counts but I found this one while I was watching one day pic.twitter.com/kKldUcpcSY

However, when it’s all said and done, at least this person’s mom makes great lasagne.

Why I’m Worried About WWE 2K22