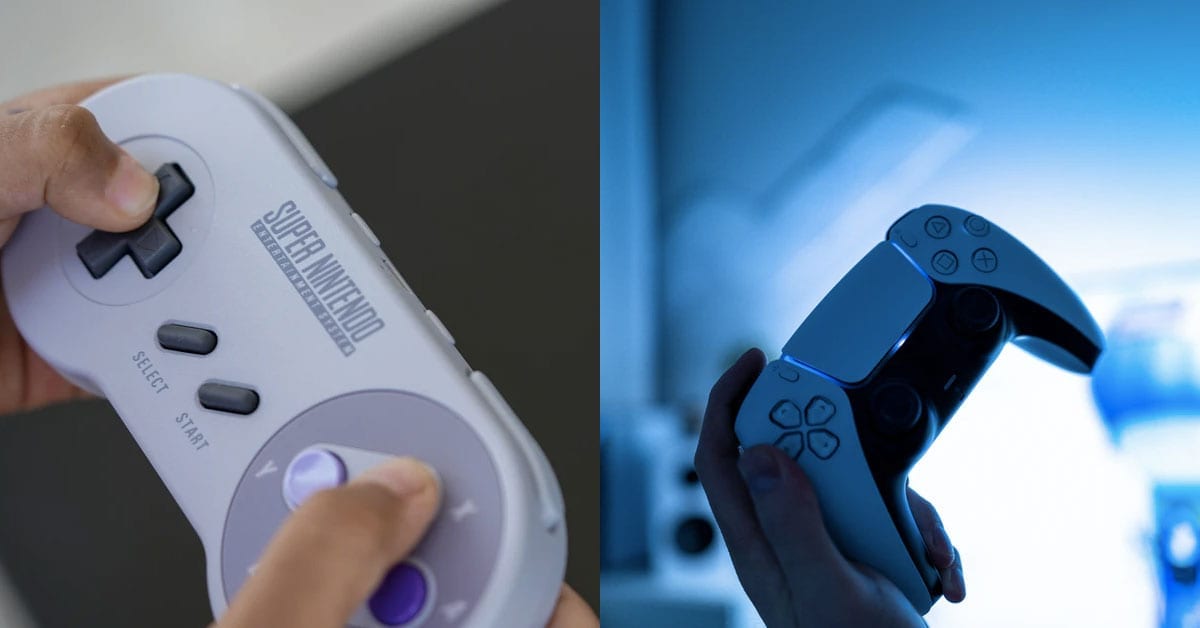 Over the years there have been countless video game controllers, some great, some good and some that can only be described as abominations. We all have our favourite controllers for a number of reasons, whether it’s style, comfort or being revolutionary for its time.

In truth, I couldn’t simply pick out one single controller that I prefer more than any other. So with that said, here are my personal best video game controllers of all time.

There’s something instantly comforting about the SNES controller. Its welcoming primary colour scheme for the action buttons (outside of the US), and the curved edged design allows the controller to sit comfortably in your hand.

While the previous NES controller may have some added nostalgia, its sharp rectangle design isn’t the most comfortable. Nintendo took what worked and what didn’t with the NES controller, and used that info to shape the slightly more evolved SNES controller offering near-perfection for its time. It’s hard to look at one without feeling nostalgic, but I have to say I prefer the brightly coloured buttons over the American versions’ purple colour scheme!

If there was ever an atypical Nintendo controller, it’s the N64 controller. Even to this day I look back and think how on earth did that controller work? Yet it did.

The controller features a single analogue stick in the centre, a trigger at the back behind the analogue stick, and equally oddly placed buttons. I don’t think that any other company could get away with this design today, other than Nintendo. Yet when I see this beloved controller, it instantly gives me fond memories of GoldenEye 007 and Ocarina of Time. I doubt Nintendo will ever revert back to this design, but we can still look back at this controller with admiration of yesteryear. While it doesn’t earn a spot on this list for comfort, it’s here for its instantly recognisable and unique style.

Ah the Wavebird, easily one of my favourite controllers of all time. The GameCube controller was the first controller from Nintendo to feature two analogue sticks. Granted the Y and X buttons always caught me off guard when playing Resident Evil games, but there’s something particularly special about this controller. It just feels right.

The original GameCube controller was improved upon with the wireless Wavebird. While the Wavebird was by no means the first wireless controller, it was arguably the first to get it right. No more short cords and a reported 100-hour battery life with two just AA batteries. To this day I still have the same Wavebird controller that I bought back in 2002, which is a testament to how great this controller is.

The Nintendo Switch Joy-Cons take what worked with the Wii and Nun-Chuck and evolved it for modern gamers and a modern console.

The Joy-Cons are one of the most versatile controllers of all time. They can be used as a traditional controller with two analogue sticks by using a Joy-Con Grip, and they can be split into two controllers so that an additional player can join in for some co-op.

They can also be used vertically or horizontally (depending on the game), have built-in motion controllers and can be used in a number of additional accessories in innovative ways. I know they’ve had issues with drifting (thankfully not for me), but for the most part, the Joy-Cons have been great for Nintendo Switch gamers and will go down as one of Nintendo’s best of all time.

Talking of comfort, there’s probably no retro controller that fits so comfortably in your hand than the SEGA Megadrive (Genesis in the US) controller. Much like the NES, the Megadrive’s predecessor, the Master System, had a rectangle controller and it wasn’t the most comfortable. SEGA improved its controller vastly with the releases of the Megadrive.

Unfortunately, the Megadrive controller felt like it was made with cheap materials and didn’t have much weight to it. It was also limited to just three action buttons on its face. However, when the new 6-button controller was released, it corrected all those concerns as it felt better quality, and was great for when playing fighting games such as Street Fighter 2. I can hand-on-heart say the six button controller for the Megadrive is my favourite SEGA controller of all time.

The N64 controller was the first to have rumble capabilities in April of 1997 with a rumble pack expansion. However, when the first DualShock released for the PS1 in November of 1997, it was the first controller to have a built-in rumble. It also brought dual analogue sticks to PlayStation for the first time.

The legacy of the DualShock continued to live on throughout the generations of PlayStation consoles that followed.  From the PS1, PS2, PS4 and now PS5, while the concept of the DualShock has evolved over time, its blueprint forever remains etched in PlayStation’s rich history.

The haptic feedback and adaptive triggers are game-changers for the modern controller. At first, I thought of them as a mere gimmick. However, they allow you to almost feel the weight of each gun as you pull the trigger, as well as the tension of pulling back a bow string or the feel of web-slinging through the streets of New York.

Once you’ve experienced the haptic feedback and adaptive triggers, it’s difficult to go back. Oh and on top of that, not only does the DualSense have a built-in speaker but it also has a built-in microphone! We gamers are truly being spoiled in this new generation.

Steel construction with a soft-touch plastic exterior gives you an almost perfect weight, comfort and grip. Taking inspiration from the likes of the Scuf controller (which I’ve sadly never used), the Elite Controller has rear paddle buttons that you can swap and remove.

With the accessories that come with the Elite controller, you can also swap from a variety of analogue sticks varying in height and rotation, as well as a choice of thumbstick styles. You can also program the buttons to function how you please, and save a number of profiles to suit particular genres.

However, the first incarnation of the Elite Controller was not without its flaws and technical difficulties. Some gamers reported that the thumbsticks would lock or even come loose during gameplay, which is far from acceptable for a controller in the access of £100. When the Xbox One Elite Controller Series 2 released in November 2019, it not only fixed the reported issues of its predecessor but also enhanced its features too.

The Series 2 has a new adjustable tension for its thumbsticks, shortened hair trigger locks and a new rubberised texture for even more grip and comfort. It even brings more customisable features, USB-C wired connectivity, and an improved 40-hour rechargeable battery life. Whether you game on PC, Xbox One or Xbox Series X|S, if you can, the Xbox One Elite Controller Series 2 is worthy of your consideration.

So that concludes my personal list of my favourite video game controllers of all time. Don’t forget to let us know your personal favourites across our social media channels.