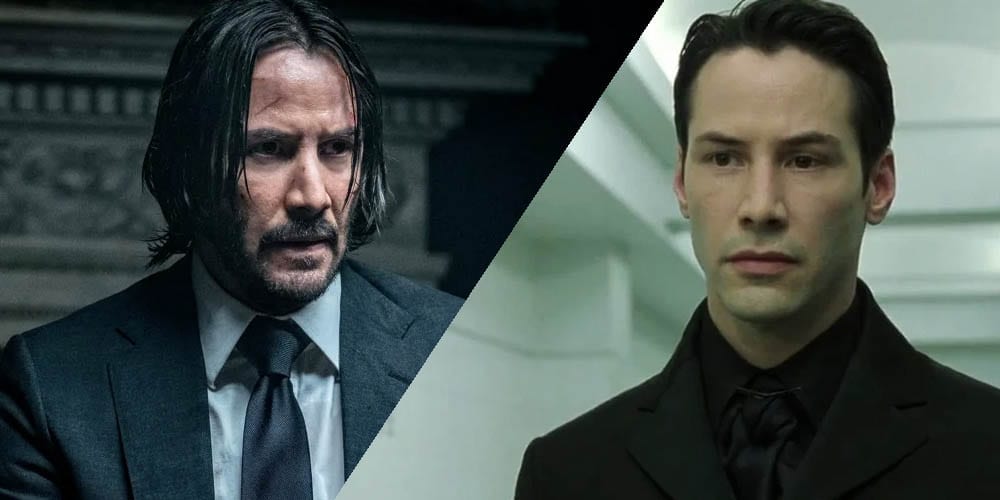 Welcome to the strange ideas behind connected movies. This time, we’re looking into the The Matrix to see how it COULD connect to the John Wick series. Although both star Keanu Reeves doing his thing, it might be hard to link the Wachowskis’ dystopian thrillers to the bloody world of The Continental. Let’s have a look.

With the recent news that Keanu is sticking back on a pair of his shades and a long leather jacket for a fourth Matrix movie, it could be time to revisit the theory that Neo is actually the sharp-shooting assassin of the John Wick franchise.

Appearing on Reddit, there’s a complex web that bills John Wick as a prequel to The Matrix. Here, “John Wick” is an identity given to Neo to satisfy his need to “get out”. He’s given constant obstacles that keep him occupied and distract him from trying to escape the computer-generated reality he’s trapped in.

Elsewhere, Ian McShane’s Winston is more than just the owner of The Continental Hotel and is actually the Architect. The theory says the moment Winston commands a whole square of people to his will. Instead of just being a powerful man, the theory guesses that the people in the Wick-Verse are nothing more than computer programmes.

Other theories claim John Wick may actually be a sequel to The Matrix. It’s much of the same, but you just flip the ideas around the other way. All point the video game quality of the John Wick movies and the way the general public doesn’t seem to react to the devastating events of gunfights and assassins going on around them. It would definitely explain the crazy and sometimes bizarre world of Mr. Wick.

Added to this, there’s a clever Matrix nod in  John Wick: Chapter 3 – Parabellum. When Winston asks what Wick needs, he replies, “Guns. Lots of guns.” Matrix aficionados will know this is that exact line Neo utters before the movie’s action-packed lobby shootout. Coincidence? Definitely not.

Other connections include Lawrence Fishburne in both franchises, David Leitch’s work on John Wick and The Matrix Revolutions, and the fact John Wick Chapter 2’s director is Chad Stahelski — Reeves’ stunt double in The Matrix trilogy.

At the end of the day, it may be farfetched to take this theory any further. That being said, it’s still a nice idea. With the Wick-Verse continuing with John Wick 4 and an upcoming TV show, maybe we’ll see Reeves go full Matrix? I can’t wait to see what happens.