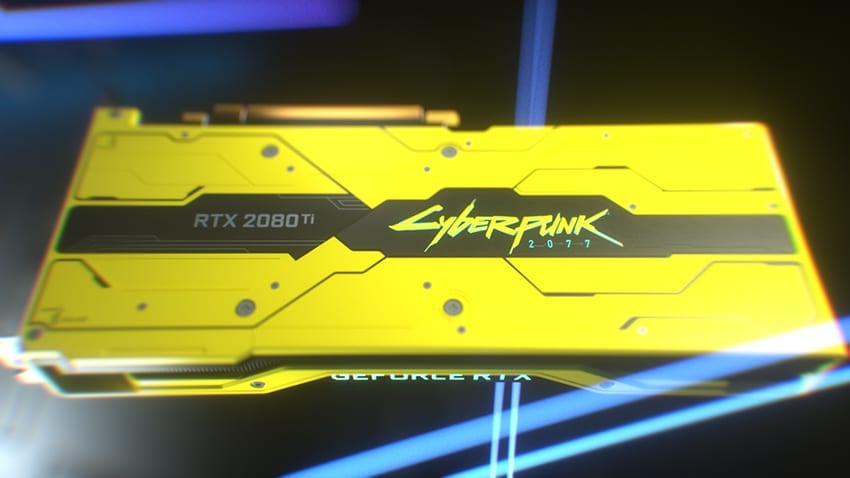 Cyberpunk 2077 and tech giant NVIDIA have teamed up to offer you one of the coolest (and rarest) GPUs on the planet. Introducing the GeForce RTX 2080 Ti Cyberpunk 2077 Edition GPU by NVIDIA!

Over on the NVIDIA website, the company explains that a GPU like this will give you the best possible gaming experience when the CD Projekt Red title drops later this year.

The team says: “We’ve made just 200 of these Cyberpunk 2077 GPUs, they won’t be sold, but you can potentially win one (details below). Each has a custom AL5052 aluminum shroud, with Cyberpunk 2077’s signature yellow styling, and powerful GeForce RTX 2080 Ti hardware underneath. And of course, it comes gift wrapped in a special edition Cyberpunk 2077 box, perfect for a collector’s shelf.”

If you don’t manage to win this time around, don’t worry, because GeForce promises “other giveaways and charity auctions of the GeForce RTX 2080 Ti Cyberpunk 2077 Edition to help spread positivity, reward our fans, and help good causes fund their charitable acts.”

Find out how you can enter to win right here.

Releasing in September of this year, Cyberpunk 2077 might just be one of the most-anticipated games of this generation, and it’s already thought to be a contender for Game of the Year.

In case you missed it, the CDPR game’s description reads as follows: “Cyberpunk 2077 is an upcoming open-world, action-adventure story set in Night City, a megalopolis obsessed with power, glamour and body modification.

“You play as V, a mercenary outlaw going after a one-of-a-kind implant that is the key to immortality. You can customize your character’s cyberware, skillset and playstyle, and explore a vast city where the choices you make shape the story and the world around you.”