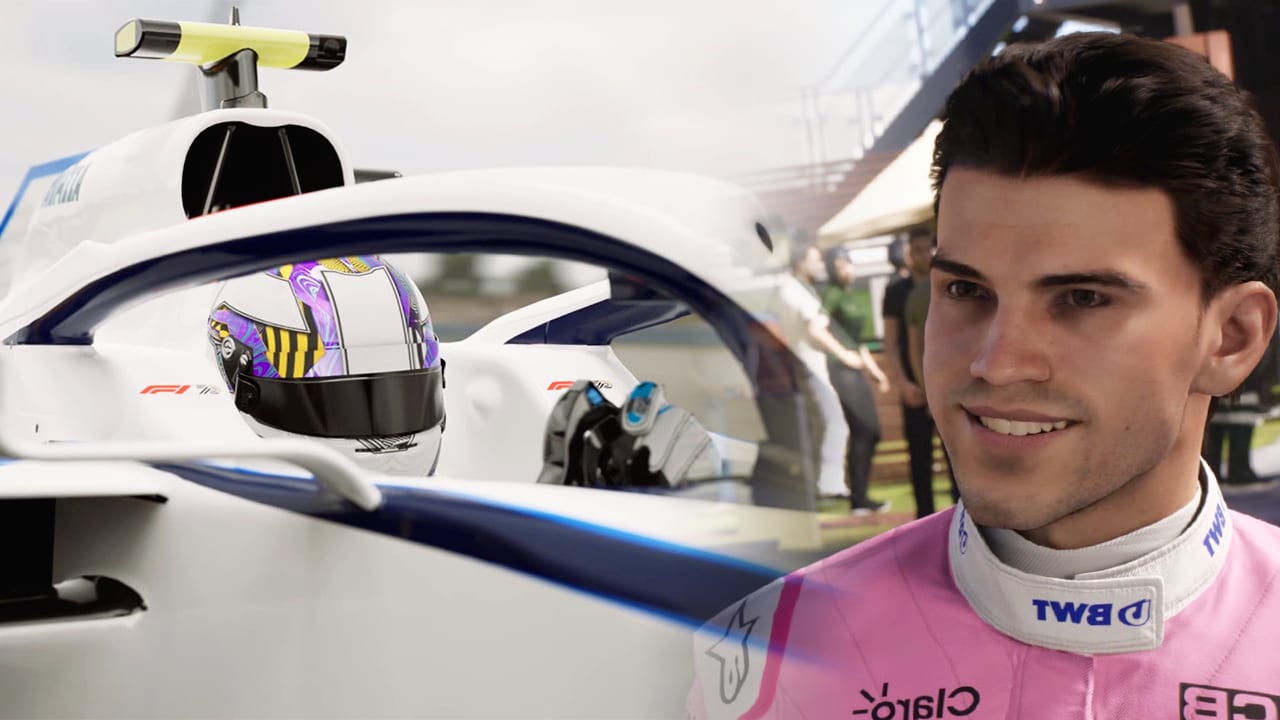 After a year off, story mode in the F1 games is back with ‘Braking Point’ taking P1 position in the upcoming F1 2021 from Codemasters.

The new story mode continues on from where 2019 left off. There are returning characters, a host of new ones, and enough fabricated drama to give Netflix’s Drive to Survive series a run for its money.

I’ve been able to play the first hour of Braking Point which sets up the new characters for their journey through the F1 season. Here’s everything we think you need to know about the story mode in F1 2021: Braking Point.

In Braking Point, you take on the role of Aiden Jackson, an F2 champion turned F1 rookie. Spanning from the 2019 F2 season and into the 2020 F1 season, it’s your job to prove your worth in one of the midfield teams.

You join the team alongside an F1 veteran, Casper Akkerman. He’s a fictional F1 legend with a long legacy at the team. Jackson idolised Akkerman before entering F1 himself, but driving alongside your heroes turns out to be trickier than it looks.

Jackson, Akkerman, and all of the characters in Braking Point, are rendered in stunning detail. The shift to next-gen consoles is clearly doing some heavy lifting here. Character models are incredibly detailed and animated in a way that makes them look more realistic than ever before. It brings these drivers to life as they navigate the volatile landscape of F1 tactics.

Those who played F1 2019’s story mode will be pleased (or infuriated) to see the return of Devon Butler. A young addition to the F1 roster, Devon is slimy, egotistical character whose plotting extends beyond the track.

He serves as a pivotal antagonist in Braking Point. Driving for a rival team in the 2020 season, Devon is one of your main competitors out on the track.

You’ll also need to be wary of him in the paddock. Devon is constantly poking his nose into situations where he’s not welcome. Capitalising on tensions and stirring contract rumours to sweeten the pot, you’ll need to be tactical in your post-race interview responses to keep the press at bay.

Outside of Butler, there’s of course the IRL roster of F1 drivers that we know and love. Depending on which team you choose to drive for, some will of course be missing. Even so, it’s great to race alongside our fan favourite personalities on the track, even if they aren’t voiced for cutscenes.

Drive for your favourite mid-field team

As alluded to, there’s some element of player choice in the F1 team you wish to drive for. You can drive for one of AlphaTauri, Aston Martin (Racing Point), Alfa Romeo, Haas, or Williams.

Whichever team you choose will replace the usual F1 drivers with Jackson and Akkerman, so bear that in mind when choosing. For example, choosing to drive for Williams means that George Russell and Nicholas Latifi will be noticeably absent from the grid.

While some might have hoped for some player choice to have an impact on the Braking Point story, the narrative is very much a linear experience.

Each chapter throws you into a number of sticky situations that you’re tasked with making the most of. It could be climbing back up the order after a disastrous manoeuvre, or making the best of a botched tyre strategy. Gameplay sequences will provide a good amount of variety that exhibit just some of the scenarios that F1 drivers are faced with.

It’s clear that Netflix’s Drive to Survive series has had an influence on the way the story is crafted. Scripted segments are clearly implemented to invoke a sense of drama. As such, there’s no branching story or real consequences for failure that we’ve seen yet.

Another feature that strongly links Braking Point with Drive to Survive is that aspects of the real F1 seasons perpetuate the experience. In between chapters, you get to sit in your driver’s room and peruse through news, social media, and emails.

While much of what you see is related to the fictional events occurring during the story, you might recognise some elements from the real F1 news world. Breaking news stories like Aston Martin and Fernando Alonso returning to F1 appear on social media as the seasons progress.

If you watch a lot of F1, you’ll also recognise familiar pundits like Will Buxton and David Coulthard who provide short opinions on the in-game version of Twitter. I checked, and their Twitter handles are even the same – a neat touch.

It all serves to ground this narrative F1 experience in something that feels a little more real. If anything, it’s a more optimistic representation of what the F1 2020 season could have been. There’s no pandemic in Braking Point to cancel the first half of the season, so it’s almost comforting to be able to recreate the races that were lost to COVID-19.