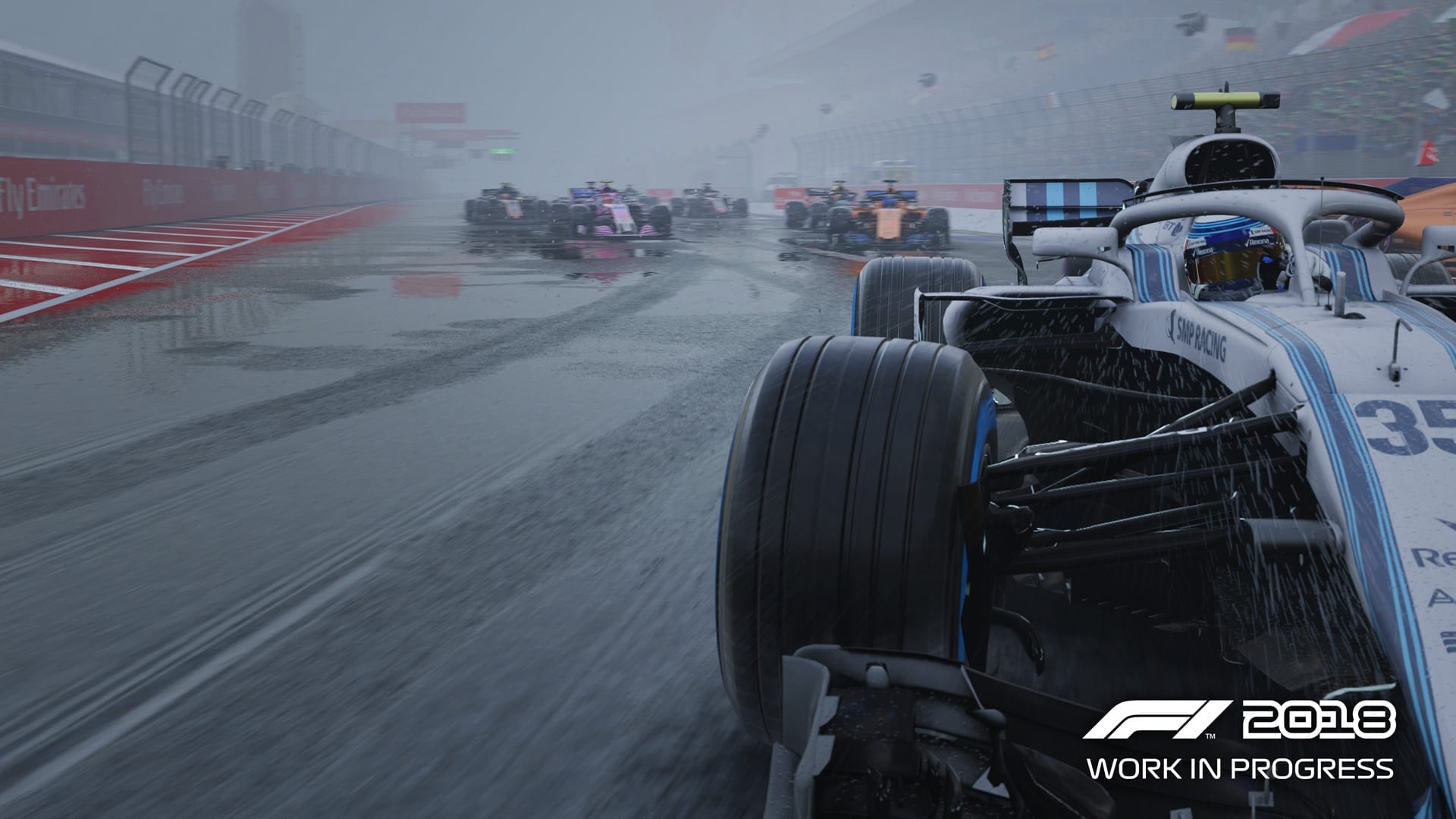 There is undoubtedly all sorts of pressures that come from releasing an annual sports game, not least how one continues to build on the previous instalments year-on-year. And with the tenth game in their F1 franchise arriving in just under a month’s time, Codemasters find themselves in that situation once again – especially given that F1 2017 was arguably their greatest work with the F1 license to date. 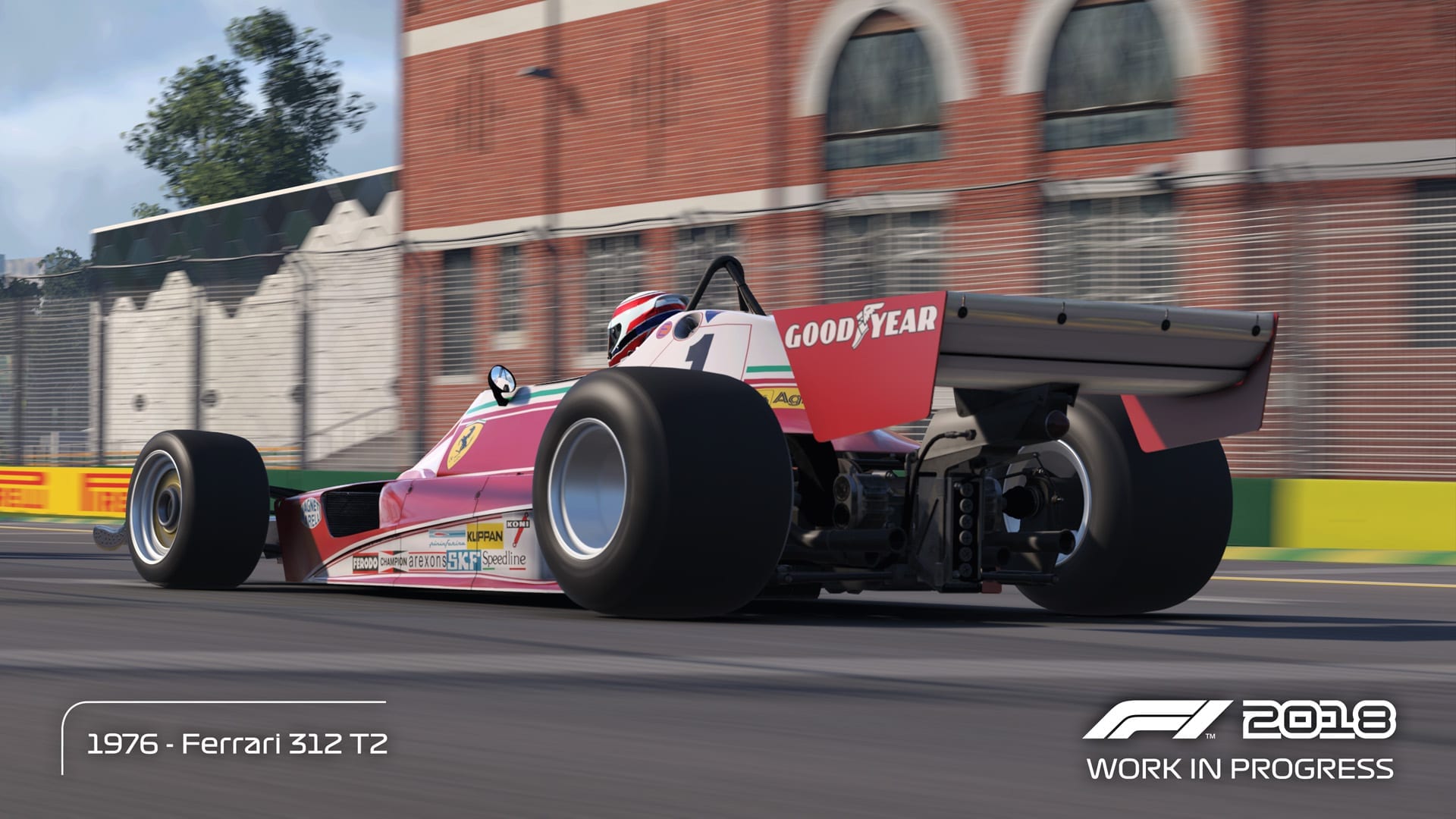 The pressure is on once more, but whisper it quietly; it looks like Codemasters are set to hit yet another home run.   Last Thursday we got our hands on a preview build of F1 2018 at an exclusive press event in London, as well as have a sit-down chat with lead developer Lee Mather about what to expect from the game. And having explored the various new features and driven the new cars and circuits – on both controller AND steering wheel – it’s time to bring you our first impressions of the upcoming tenth instalment in the Codies F1 franchise.

At their core, the Codies F1 games have almost always revolved around a strong career mode. It says a lot that their only title to not include a career mode – F1 2015 – received criticism for lacking content, and the mode was back with a vengeance in F1 2016.

With all that in mind, F1 2018 seems set to take another big step forward with even more content for players to get stuck into in career mode. And that ‘Make Headlines’ tagline? It’s not just a buzzword. A huge amount of F1 2018’s career mode is set to focus on immersing the player in the wider world of F1, and your relationships as a driver with your team, fellow drivers and the media. When you watch a Formula One race on television, you don’t just see the drivers racing on the track – you’ll see them give interviews in the paddock and debrief in the garage with their team, and all the while the pundits will be dissecting the minutiae of their performances. That’s exactly the attention to detail F1 2018 is going for – as Mather explains.   ’We’re really inspired by what happens in the sport, so you watch the sport and you think ‘that’s a great thing, we’d really like to include that in the game’. A lot of the gamers want to experience the life of an F1 driver, and we want them to experience that as much as possible in the game – take on the intricacies of managing their R&D, dealing with their contracts, moving teams – because it’s mirroring what they see on TV. And I think that’s really important, because we’re not just a racing game, we’re a representation of a real sport, and I think that’s really cool. We could have not created all the cool new environments that we’ve built around the circuit, but again that adds to the flavour and the authenticity. 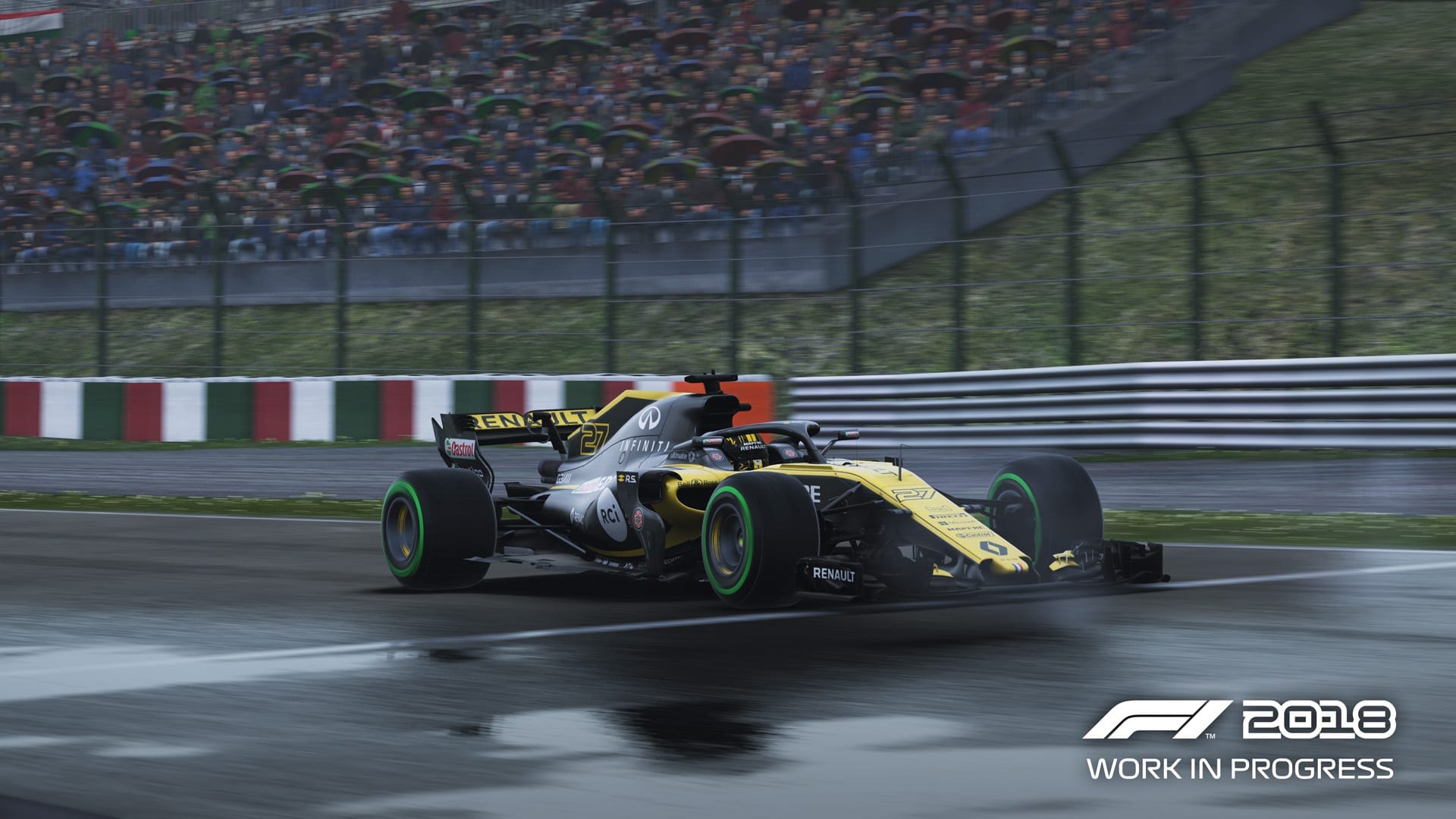 Our big takeaway from the new and improved Career Mode was just how much everything linked together. For example, you can earn Sportsmanship or Showmanship points based on what your answers to the press are, and each team will have a preference as to what kind of personality they want from their drivers. Do they want a brash, cocky Max Verstappen-style superstar? Or do they want a more softly-spoken team player like a Valtteri Bottas?   A detail we liked is how specific feedback affects different parts of your team; for example, if you mention in an interview that your car was lacking power down the straights, a pop-up will appear saying that your team’s engine department will have heard what you said. And this all ties in with Mather’s favourite part of the new career mode – contract negotiations, where the player can negotiate with other teams (as well as their own!) for stronger perks and a better position within the team:   ’I like the fact that everything I’ve done before sets me up for whether I stand any chance of getting the drive I want! The player can go to a team and make promises, and if they don’t deliver they’re in trouble, but obviously the team will give them the perks they think they deserve in the game – or you’ll be able to negotiate for the perks that you think you deserve. So you can go in there and say ‘maybe I’ll take the pit perk’ so the pit crew will be of a higher quality, but maybe that’s the ONLY thing you can get – maybe your R&D is a bit slower, because you couldn’t get the simultaneous development perk. So it’s a great way to balance out what you think will progress your career most effectively.’

In an era where single-player is supposedly on the wane in mainstream gaming in favour of the ‘live service’ model, it’s fantastic to see Codemasters pour more and more into their single-player year on year – and on an aside, other modes like the excellent Championships mode look set to make their return this year as well.

First featured in F1 2013, Classic Cars returned to the F1 series last year and will feature more additions to the roster for 2018. Perhaps the most significant of those are the 2009 Brawn BGP001, the car which carried Jensen Button to F1 World Championship glory in one of the biggest shocks in the sport’s history and included here as a pre-order bonus. Alongside that will be some legendary 1970s-era cars, including the stars of the 2013 movie Rush; James Hunt’s 1976 McLaren M23, and rival Niki Lauda’s Ferrari 312T. The contrast between those legendary beasts and the modern hi-tech machines offers a completely different driving experience – and a different challenge for Mather and his crew.   ’For those cars, it’s TOTALLY different. The tire model is completely different, the aero is completely different, the engines are different capacities and cylinder layouts – we also do the orientation in the engine in the chassis, so you’ll see when they rev that the chassis moves in the right direction. We go to all those lengths! Ultimately they are a REAL handful, and it’s a VERY different experience. When you watched video footage of those cars back in the day, they were ALWAYS sideways! The best way to get out of a corner was a little sideways movement, and that’s what they are like in the game – and it makes for some really exciting racing.’ 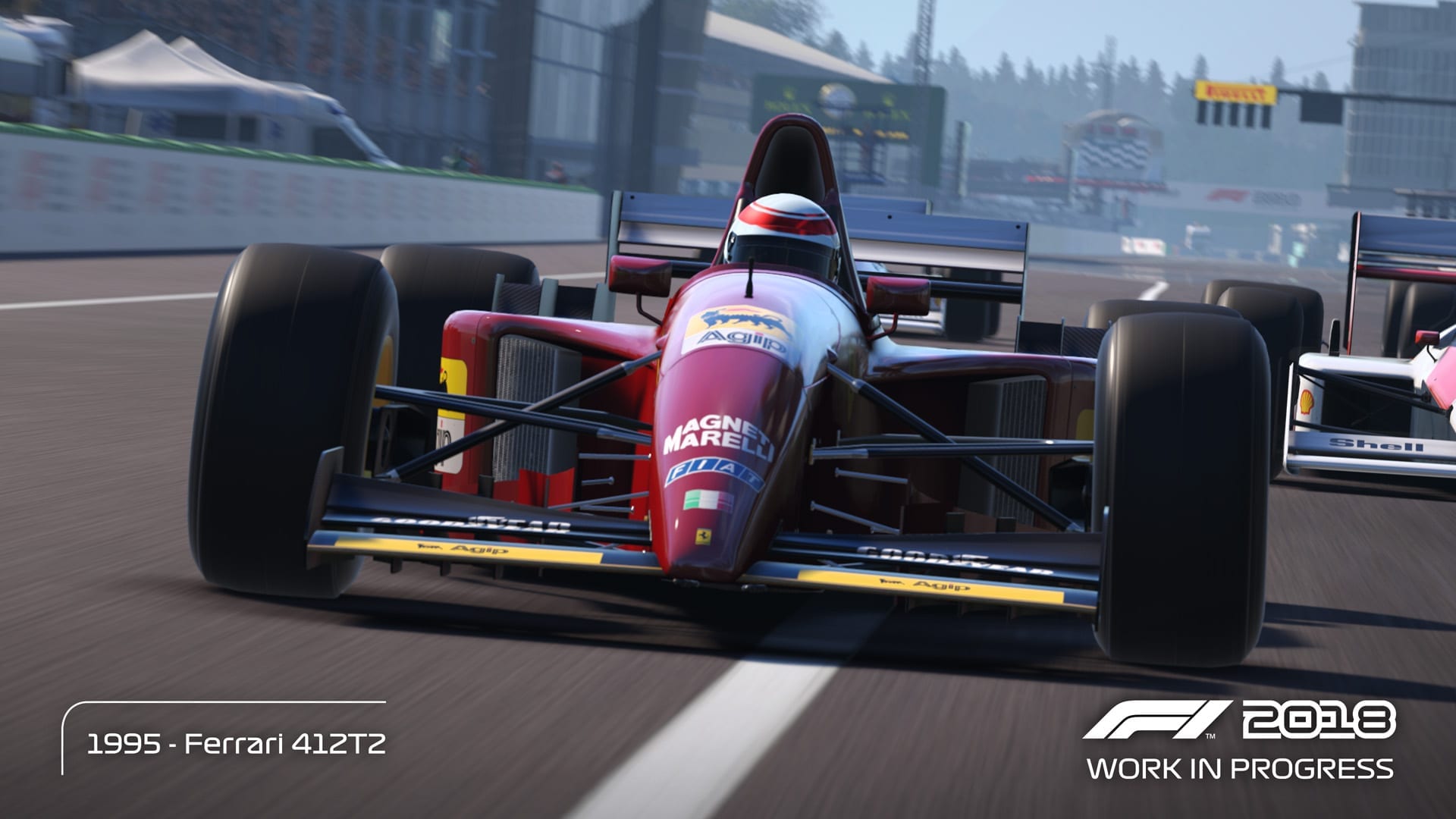 Having driven multiple laps on a Fanatec sim rig, this author can more than confirm just how much fun those 1970s cars are to drive; the big smile on my face (and the sweat, and the sore arms!) are testament to that.   Rising Through The Ranks

Another huge part of the Codies F1 franchise down the years has been online multiplayer, and with the F1 Esports World Championship growing rapidly in stature, more and more hours will be spent by players in the online modes. To help with players’ progression and to avoid potential issues with griefing and drivers getting deliberately wrecked out, Codemasters are introducing a Super License system. Players will earn Skill Rank, Safety Rating and Experience by competing in ranked lobbies designed to improve matchmaking, in a similar way to iRacing’s license system. And by levelling up, drivers can compete against evenly matched – and crucially much safer – opponents. 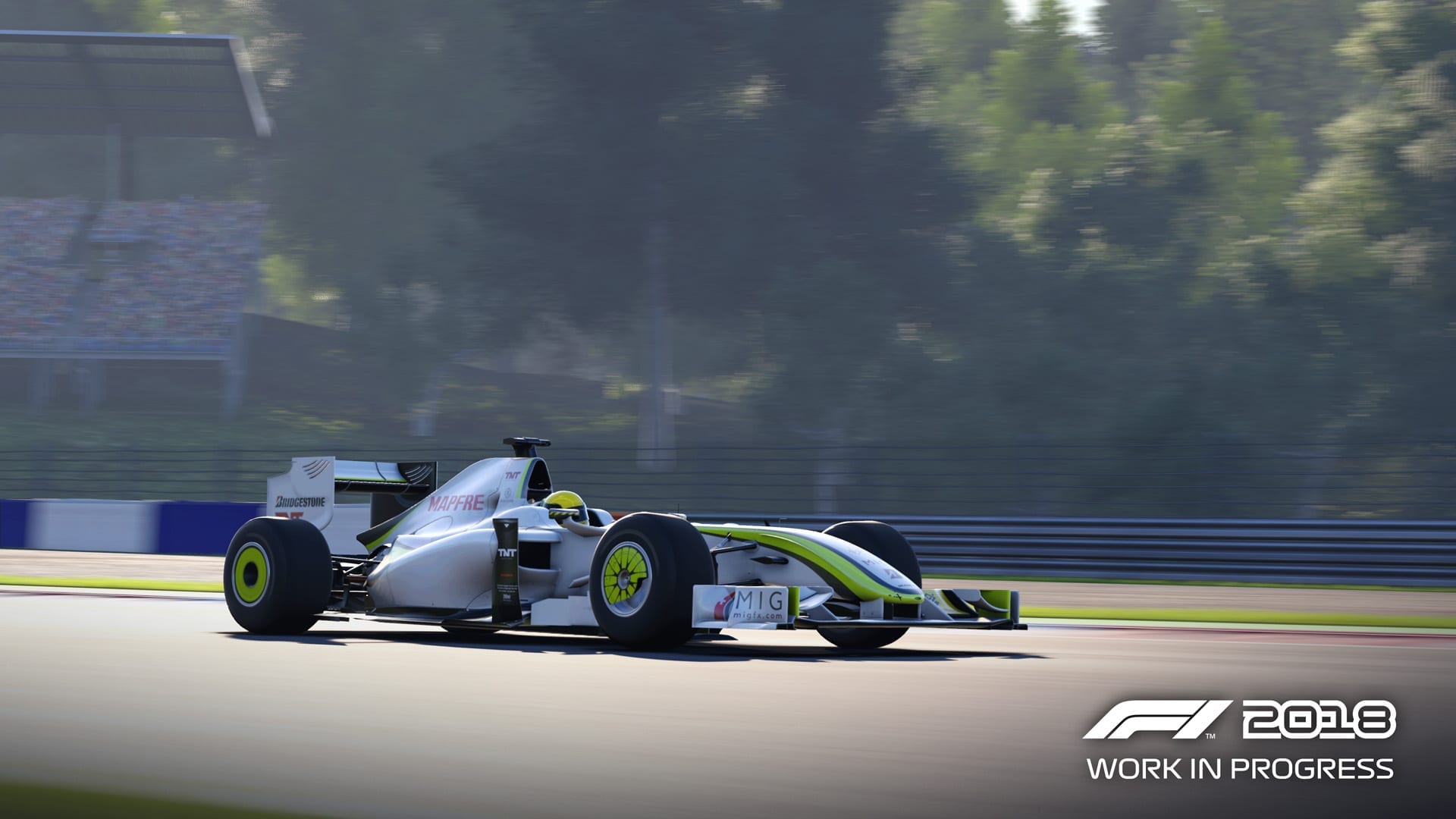 ‘What I’m really hoping is that people will see their Super License and ranking as a badge of honour. I don’t mind if you’ve got a low performance rating, it’s fine to be a slow driver, it’s whether you’re a dirty driver or not. If I’m performing at a low level, I’m not a quick player, but I still want to enjoy the racing, I’ll be matchmade against people of a similar skill level but who are also looking for the same sort of experience. The knock-on effect should be that more people will learn to race online cleanly, and that will increase the pool of drivers going through (the F1 Esports Championship and Pro Draft) year-on-year; we’ll get more and more high-caliber racers from it!’

Speaking of the driving experience, refinements have been made there too; the chassis and suspension physics have been tweaked, and the tyre carcass temperature has been added to the tyre model to add further realism and elements of strategy. F1’s current hybrid power units use a high-tech Energy Recovery System (ERS) which harvests energy that can then be deployed as extra power across each lap, and F1 2018 adds the ability for players to control ERS deployment just like the real drivers for the first time.

The new game will also feature the Halo cockpit protection system as seen on the real 2018 Formula One grid, and whilst it has proved controversial largely for aesthetic reasons in real life, the Halo provided a different problem when modelled in-game. On the real cars the driver is able to focus their eyesight past the centre support strut, but on a flat screen in-game it becomes far more of a visual deterrent. Therefore, F1 2018 will include the welcome option to remove the centre strut to help with visibility.

Other new features include atmospheric affects for mist and fog, as well as neat touches like the shimmering heat haze rising off the track surface (particularly on the starting grid) and dust getting kicked up when cars run wide or move on parts of the track less driven on than others.

In short, there’s a huge amount of new features and content on the way for F1 2018. And given that last year’s edition was arguably one of the greatest F1 games of all time, we could be in for something very special indeed come August 24th. 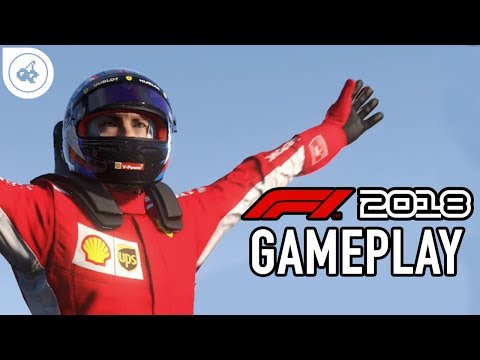