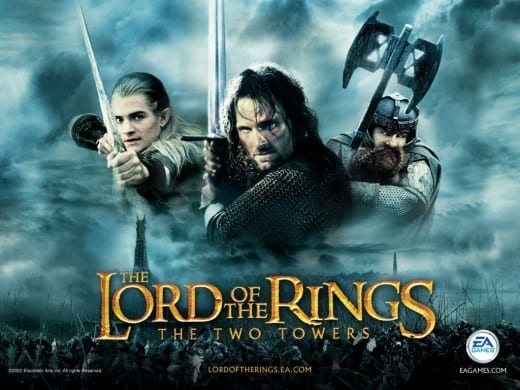 Looking back to the early 2000’s, I absolutely loved The Lord of the Rings: The Two Towers (2002) and The Lord of the Rings: The Return of the King (2003), both of which were based upon the hit movies from Peter Jackson (rather than the J. R. R. Tolkien novels) and they proved that movie based tie-ins can work if done right.  (Being a latecomer to the world of Hogwarts, I never did play the Harry Potter games from Electronic Arts.)

Sadly however, since the gaming licenses are now in the hands of Warner Bros, The Lord of the Rings gaming franchise has arguably failed to hit the same heights as when they were developed by EA during the early 2000’s.

For the last two years, gamers have been petitioning for the re-license of The Lord of the Rings and Harry Potter games made by EA and Vivendi, and with close to 8,000 signatures at the time of writing, here’s hoping it’s actually going to happen.

As the petition puts it: “In the previous decade, Electronic Arts made deals with Time Warner to make and publish video games based on both the Harry Potter and The Lord of the Rings franchises. However, the LOTR and Harry Potter games that were made under EA cannot be published due to the licenses having expired years ago.

“Therefore, if Warner Bros could work out a possible licensing renewal deal with EA so the latter can publish their old Harry Potter and LOTR games, it would mean a great deal to both Wizarding World and Middle-Earth fans alike.”

I know EA of today haven’t earned any good graces from its fan base, but with their attitude seemingly being turned on how they perceive single player games following the success of Star Wars Jedi: Fallen Order, now could be the perfect time to revitalise The Lord of the Rings gaming franchise.

I’ve banged on about The Lord of the Rings here far more then Harry Potter, but the reason being is that a Hogwarts RPG is currently rumoured to be in development by Warner Bros, so as unlikely as it might be for J. R. R. Tolkien’s adaptations to once again fall into the hands of EA, it’s perhaps even less unlikely that it might happen for Harry Potter.

However, that all said, despite how unlikely winning a battle in Middle-Earth might seem, we can only hope that our voices are heard by Sauron’s eye in the sky and one such way is by signing the petition found here.

Will you be signing the petition?  I have.  If so, don’t forget to get signing, sharing and talking across our social media channels.