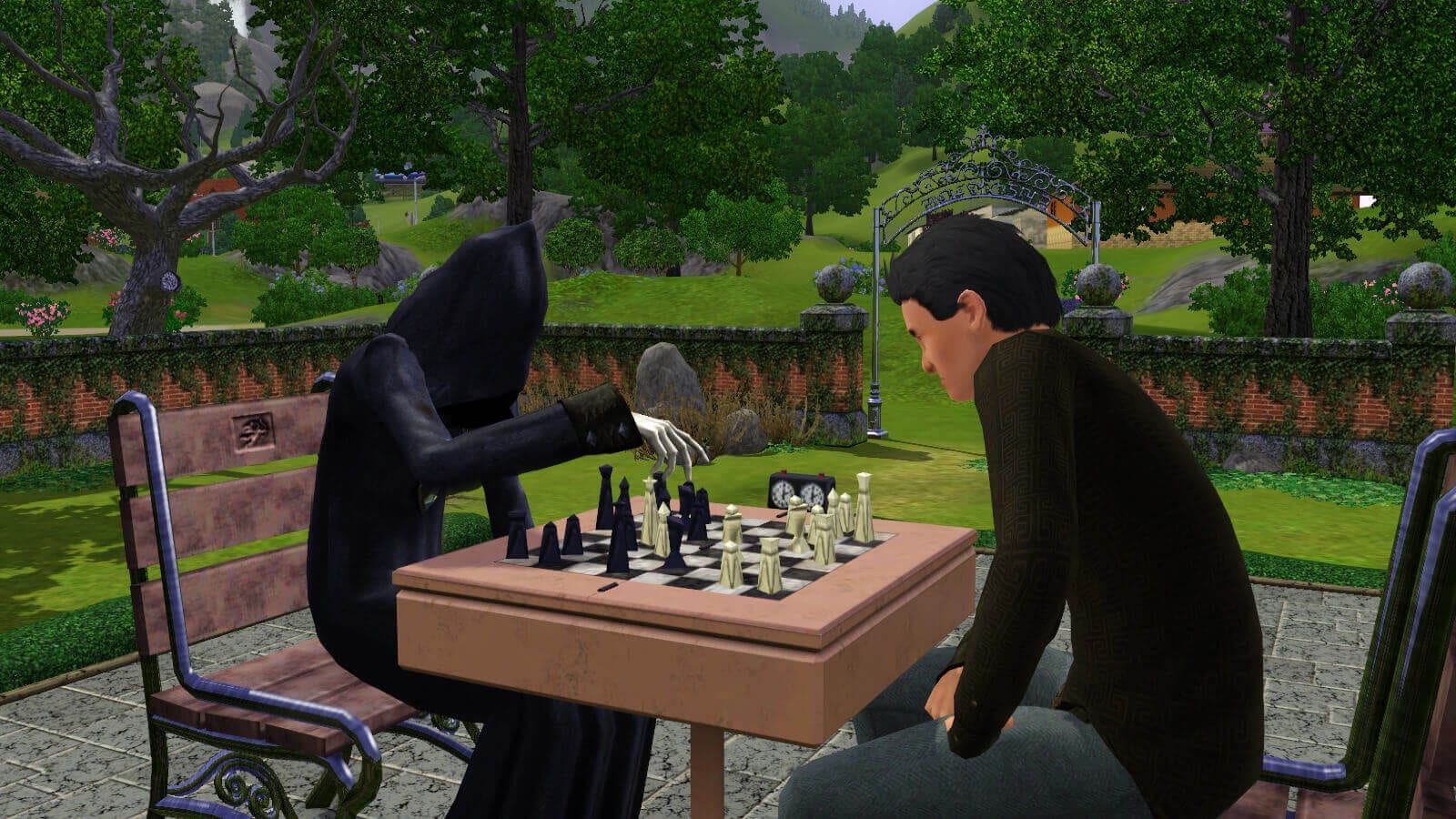 In case you missed it, The Sims franchise just turned 20. That’s right, the simulator game that changed it all has just celebrated a milestone birthday. Remove the toilets, stick the baby on the BBQ, and take the ladders away from the pool as we take a warped look at the most f’ed up things we’re ever done to our sims.

The best bit about The Sims, its various expansion packs, and the ever-growing sequels, was the ability to torture those poor souls. Effectively playing God, most of us turned into sadistic kids burning ants with magnifying glasses.

In 2017, someone came up with the frankly brilliant idea of asking what’s the worst thing Sims fans have done to their computer creations. It created a stupidly popular Reddit thread that got very dark, very quickly.

From trapping Sims in burning rooms to turning them into living goblins, trying to cheat death to seducing the whole neighbourhood, here are the most disturbing things people have ever done in Electronic Arts’ fabulous franchise.

It doesn’t take a lot of imagination to get your Sims in the pool and watch them paddle their way to the grave. Drowning your Sims is an old school (and boring) way to off those poor pixels. However, one malicious gamer took this up a notch with the funeral.

Instead of having the mourners come in their finest black attire, the attendees were forced to dress in swimwear to wave off the dearly departed. How devilishly delightful of you. We recommend you probably don’t attend a funeral IRL if you’re wearing Speedos.

The OG poster has been deleted, however, they tell the story of the ‘Golddigger’. The post explains, “He’d find old ladies, flirt with them, get them to leave their husband, marry them and take over their house and money, then lock them in a room until they starved to death.”

If this wasn’t twisted enough, the thread reveals what this villainous Sim was spending all his money on. It was only immortality potions. This means the Dorian Gray-inspired Sim would live forever and presumably make his way through the entirety of the female population by picking them off one by one.

Who doesn’t love a good pizza? Well, it turns out Sims also can’t get enough of that Italian delicacy. One player explained how one of their Sims would constantly order pizza.

Like some sort of twisted lesson pulled from the movie Se7en, the pizza obsessed Cassandra lived a life of misery as the player cancelled her order every time she picked up the phone. Eventually, they caved and let Cassandra order a pizza and place it on a big wooden table. She sat at the opposite end as a pool was built around her.

The trapped Cassandra was then marooned in the middle of the pool and starved to death while staring at a pizza that was just metres away from her. This one is the upper ‘crust’ of Sim sadism.

‘Gnome’ Is Where The Heart Is — u/angerdome

If Goosebumps is anything to go by, it’s that the humble garden gnome can hide something more sinister. This redditor created a Sim with a penchant for crafting lawn gnomes, and it turns out, they were really good at it.

The player would invite neighbours over and find a variety of ways to kill them — creating a whole plot of tombstones. When they ran out of room, they knocked most of the house down, built a smaller one, and populated it with the urns of those they’d murdered.

Meanwhile, the homeowner continued to create his gnomes and filled the lawn with an army of those bearded brutes. One day, the redditor claims their Sim snapped and started sobbing uncontrollably at their mausoleum, ran outside, and started destroying the gnomes.

They’d broken the Sim, who refused to whittle a single gnome after that. As the TLDR sys, “I drove my Sim mad in a haze of murder and lawn gnomes”.

The Makin’ Magic expansion brought an element of Harry Potter to the lives of our Sims. As well as practicing generic spells, the expansion also gave the ability to turn pets into full-blown human members of the family.

Here’s the Reddit thread about a dog called AJ. The author says, “He never had an off day and brought sheer joy to his owners”. It makes sense the family would want AJ to join them in the realm of humans.

However, the OG post says, “He turned out to be the biggest f***ing a**bag as a person and was abusive to his family, so we had to take care of him. I built a monolithic tomb, and trapped him inside”.

The thread confirms human AJ slowly died as the rest of the family gathered outside and played music to him. Worse than this, the family bought a new dog and played with it in front of AJ’s tomb. If you’re wondering what happened next, the post concludes, “Eventually a dragon burnt down the house and killed them all”. Wow!

Take Me To Church — u/BrianWantsTruth

Religion is also a part of the Sims world, meaning they presumably bow before us, their gaming overlords. One person took the blind devotion of their Sims to a new level by creating the church from Hell.

The redditor claims, “I built a small, simple structure, moved in a family of eight, got them all inside, removed the door, filled with fire. Yay, eight new tombstones! Repeat, like, nine times, and you’ve got a full graveyard of tombstones.”

They then crafted a priest to move in and tend to the graveyard. Sadly, his story was just as macabre as the ghosts started to rise from the ground and haunt him. The OG author admits the priest died a few days later from exhaustion.

No one knows who gets the credit for the Painting Goblin, however, this has become a firm favourite of evil Sims players. The premise starts off relatively simple as you create a family and assign one member the role of being the Painting Goblin.

The idea sees the Painting Goblinbeing created as a morbidly obese character who likes to be alone, loves art, and has an aversion to outdoors.

As the rest of the family goes about their happy lives, the Painting Goblin is ttapped in a green room in the basement (with a fridge, toilet, bed, etc) and forced to paint on a continuous basis.

There’s also the twist that the Painting Goblin is pretty good at painting and earns an impressive wedge from their works. The household becomes rich off the artwork but never knows about the secret family member imprisoned in its basement.

If you thought Annie had it rough, welcome to the Baby Mill. The author opened up a small for-profit orphanage where the kids were split into age groups. The toddlers were confined to outdoor pens and fed dog food, the kids had cells with a bench and toilet, while the teenagers had slightly larger cells with a fridge in — so they could help care for the younger ones.

Those who visited the orphanage and bought an item had a child sent back with them. Although the kids definitely went on to a better life, the ‘Baby Mill’ was making a small fortune. When the teenagers turned into adults, they were either booted out to a nearby ‘hobo park’, trained as the owner’s successor, or kept on to breed more babies.

Worse than this, it ends with no moral message. Redditor Bakinaage writes, “I’m still disappointed the social worker never came for them. The orphanage (meh, I should probably just call it the baby mill) eventually became a very successful chain, and the people running it never got what was coming to them until my computer died”.

This player built a huge two-storey house with a single fridge at the bottom and a single toilet at the top. They watched as the clock ticked on and it took their Sim 48 hours of in-world time to reach the toilet.

If that wasn’t enough, the tale gets even weirder. The author wrote: “Just remembered maze was 1×1 and contained mostly people from WWII”. Why such a specific point of history and bizarre experiment is beyond us.

Channeling Glenn Close vibes, u/Mama_Catfish let out some serious romance rage on the men in her life who’ve wronged her. Instead of populating her house with fictional characters, she modelled her Sims on ex-boyfriends.

In case you can’t see where this is going, she’d watch them perish in a variety of unfortunate ways. The post is brilliantly witty as she writes, “Who knows why John decided to try to fix that broken dishwasher at 2am with no repair skill? Or how François got trapped in the pool in the middle of the night? How unfortunate.”

I’d probably do the same thing, but I’d need a mansion to do it.

Having already covered how recreating your own life in The Sims can go wrong, the lesson should be clear that this is a bad idea. In a particularly poignant take on the game, u/Canelle said they made their Sim live out their EXACT life.

Picking the same career, presumably going through the same love and loss, scraping by to be able to afford your own crappy IKEA furniture, it’s easy to see why Sims living your humdrum existence might make you question your own existence.

The post concludes, “The Sim spent all the time crying. :-/ I stopped playing after that.” Yep, that would be enough to stop anyone playing The Sims.

While this redditor has since deleted their account, it’s not before they left a pretty impressive Sims legacy. Everyone has come across the odd d*ckhead Sim in the game, but the man known as Bob makes AJ, the burglar, and the tragic clown look like saints.

They explain how they were playing The Sims 2 on the PlayStation 2 and had a happy nuclear family. Wanting to give their Sims a leg up, the player built their dream house. However, they hadn’t expected Bob:

“When you move, neighbours from other blocks will come over to greet you. I wasn’t watching very carefully, but one of my Sims must have greeted him because suddenly a bald man in a green shirt was in my house. Bob.”

Bob apparently made a beeline for the kitchen, started a fire and then calmly walked away. The thread cotinues, “Bob just left. Bob f**king walked away with no emotion, leaving my family to scream and freak out in the kitchen. The mother and the father were both killed in the blaze, and the children were taken away by social services because their parents were dead. They couldn’t call for help because I’d also forgotten to buy a phone.

“I watched my favourite family burn and vowed that as long as I lived there would be no safe place for Bob. Every time I created a new neighbourhood he would respawn, always in the same shitty house without friends or family. I have killed Bob in every way available to the game. He has drowned, starved, been killed by aliens and struck by lightning. Every time I started a new game, I’d go and kill Bob first. Nobody else ever came in and burned my house down, or even used my kitchen. Only Bob.”

Well, what a happy note to end this article on!