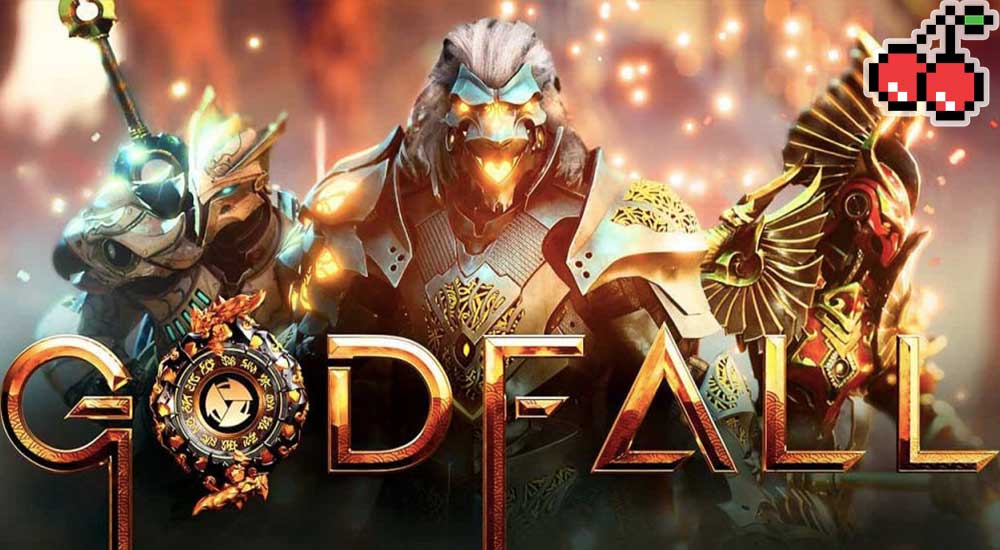 Counterplay Games’ Godfall is the upcoming fantasy looter-slasher making its way to PC and PlayStation 5 later this year. With some of the meatiest gameplay we’ve seen for a next-gen title so far, Godfall definitely has a lot of gamers excited.

GameByte spoke with Dick Heyne, Technical Producer at Counterplay Games, to find out more about Godfall’s gameplay, world and lore.

In case Godfall isn’t on your radar (and really, where have you been if that’s the case?), the game is a fantasy action RPG, packed to the brim with high-impact third-person melee combat. You’ll need to slash through your enemies, hunt for loot and unearth legendary armour sets as you make your way through Godfall’s elemental worlds.

A new IP for the next-gen PS5 is definitely a tall order to fill, and as Heyne explains, it’s not easy when it comes to selling a brand new world to gamers.

“Godfall takes place in a universe that no one has visited before, with a cast of characters no one has met. When you see Hulk, you think ‘Smash!’ When you see Silvermane, you might make assumptions. But largely, little is known,” says Heyne when asked about the challenges a new IP presents.

“We must be extra meticulous when planning out how we want to introduce the world to Godfall. If we peel back too many layers at once, we run the risk of confusing or overwhelming. But, if we peel them back too slowly, information begins to feel disjointed and unclear.”

“It’s an absolute blast building new IP with such an incredible art team,” says Heyne. “Without the limitations of trying to match a predecessor, we are able to empower the artists to chase ideas that inspire them, collaborate with stakeholders, and leave their mark on Godfall. The end result, I believe, is an IP unlike anything else out there.”

Of course, shipping a game in 2020 has its own pitfalls, regardless of it being a current-gen title or a game based on an existing world. Thankfully, Heyne says there’s been minimal issues with Godfall’s development – in part, thanks to Sony.

“Given the current situation with COVID, development has gone relatively smoothly,” Heyne says. “The greatest challenge was simply getting dev kits to the engineer and QA team to ensure builds were both stable on PC and PS5. Other than that, all development challenges have been minor and easy to anticipate.

Standing Apart From The Crowd

Although Godfall has been met with lots of praise from gamers, there’s also been some concerns that its gameplay will be too similar to what we’ve seen elsewhere. The game has already drawn comparisons to titles like the Soulsborne games, so how will Godfall make its own mark in the field? We wanted to know what makes Godfall stand apart from other combat-heavy games.

“I believe it is a combination of the layered combat mechanics and vast pool of loot to craft builds from,” replies Heyne.

“Godfall doesn’t aim to control the way you slay. Rather, it provides a plethora of tools such as Breach, Soulshatter, Weakpoints, and many more. The player is encouraged to find a style that they find most enjoyable, and craft the ideal build around those core tools.”

Play By Your Own Rules

The element of player choice extends further than that though, as Godfall has both single player and multiplayer options for you as you explore the world at hand. Whether you want to go it solo or tackle the task in a team, it’s all about playing the game on your terms.

“Godfall is all about letting the player engage with the world on THEIR terms,” Heyne tells us. “The difficulty of enemies will scale up in co-op, so while more players naturally increases total DPS, it doesn’t necessarily mean you are clearing encounters faster.

“Put another way, there are optimal solo builds and optimal co-op builds. It will be up to the player to decide which style best suits them. Neither approach should feel suboptimal.”

Perhaps one of the most exciting things we can expect from PS5 is its DualSense controller, which utilises state-of-the-art haptic technology which we’ve been promised will allow players to feel fully immersed in the gameplay. We couldn’t not ask how Counterplay has implemented the haptics within Godfall, which apparently will let you feel the direction in which you swing your weapons – something utterly groundbreaking.

“We really want you to FEEL combat,” Heyne says when asked about Godfall’s use of the DualSense. “Godfall aims to push a power fantasy unlike any other, and being able to feel the direction your weapon swings in the palm of your hands is unreal.”

Godfall’s biggest focus is on its gameplay and combat, and we’re promised the game will have absolutely no fetch quests.

“[Side missions are] combat-based,” says Heyne. “The Archons express themselves through combat. During combat, there will be various activities that pop up. But there are no fetch quests in Godfall.”

Speaking of gameplay, Godfall’s already given players a deep look into what we can expect from the upcoming title. Though it might seem complex on the surface, what we’re being promised is a meticulous and deliberate gameplay system which is set to engross players from the moment you dive into the action.

As Heyne explains: “There are 5 weapon classes: Longsword, Greatsword, Polearm, Warhammer, and Dual Blades. All weapons have light attacks and heavy attacks. The ‘combos’ you can pull off between light and heavy attacks will be dependent on the weapon class you are using.

“Yes, we absolutely encourage players to swap between weapon classes. A good example of this can be found in the Skill Grid. There are NO weapon class specific nodes in Godfall’s Skill Grid. The design philosophy behind this is simple; we don’t want the player to feel forced to index into a particular weapon class. You might spend the first few hours of Godfall convinced you’re a Polearm one trick. But, what happens when a legendary Warhammer drops that is a PERFECT fit for your build? We don’t want players to be bogged down by redoing their Skill Grid every time they find a new weapon.

“Instead, we designed all-encompassing weapon nodes on the Grid. For example, when you first assign a point to the Weapon Techniques node, you unlock the Weapon Techniques for all 5 weapon classes, not just a particular class. Polarity attacks also encourage the player to swap between the two weapons they have in their loadout. That said, if a player WANTS to be a Polearm one trick, nothing in Godfall prevents them from pursuing that.”

Godfall will see you progress through different Elemental worlds: Earth, Water, and Air. As you’d expect, each realm will offer something new for its players.

“Throughout the campaign, Orin will journey through the Earth, Water, and Air realms to take down the mad king Macros. Godfall’s campaign is meant to feel like an ‘ascension’ as the player climbs through the elemental realms,” Heyne says of the world builds.

“The realms are typically controlled by a particular faction of enemies that have sworn allegiance to Macros. For example, the Vargul control the Earth Realm. Some factions are able to move freely between the realms.”

“Every realm is unique and sets its own tone, and all the realms exist within the Skybreaker Monolith, the most glorious creation of the Valorian people,” explains Heyne. “It can pierce the heavens, to reach through space and time, and to bend reality. Within the massive superstructure is an almost infinite world of layered elemental realms speared through by a central tower.

“At the apex of the tower lies the throne room of the mad king Macros. The Player will need to ascend these realms in order to ultimately face Macros. Once the player gains access to the elemental realms, they will start at the base of the Monolith in the Earth realm.”

With such a heavy focus on combat – and having already pulled comparisons to games like Dark Souls – we wanted to know how accessible fantasy RPG Godfall will be for players new to the genre.

“The simple answer is that it depends on the difficulty you select,” says Heyne when asked about difficulty settings.

“Godfall will have various difficulty levels that should satisfy veterans and newcomers alike. We want Godfall to feel accessible to all, since the game naturally encourages you to battle alongside friends. However, we’d be doing a disservice to the player base if combat became a mindless hack and slash. Those seeking a challenge will likely be delighted by what awaits them.”