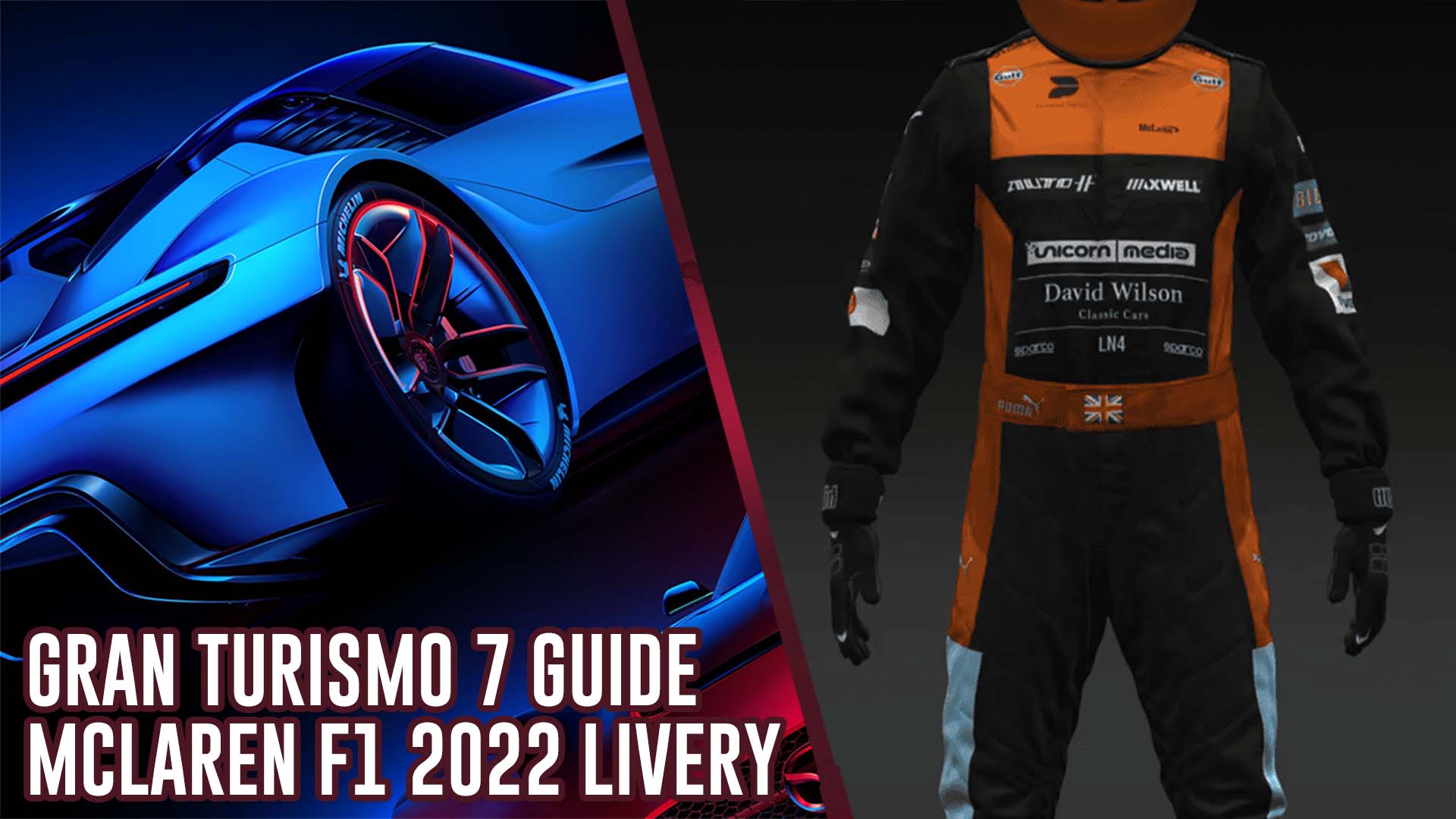 If you’re like me and have no originality whatsoever, you can spend hours trying to recreate the look of your favourite drivers and teams. For me, that comes in the form of the  McLaren F1 team. The 2022 season is hotting up as teams finish unveiling their new looks and Barcelona testing comes to a close. We’re all set for a rip-roaring season after the controversial climax of Abu Dhabi last year.

If you can’t quite get enough F1 content before the new season starts, I’ve got you covered. Here’s how you can recreate the McLaren F1 2022 race suit in the Gran Turismo 7 livery editor.

First off, we’re going to need to choose our base colours to work with. For colour one, we need to choose a very dark grey as our baseline. Though the new suits look black, it’s actually a few shades lighter. Choose a shade that’s maybe a couple of notches up from pitch black. For our second colour and third colours, we need to make them both the vibrant papaya orange that is iconic to McLaren. Make sure that they’re both set to exactly the same colour for it to look right.

We need to start by blocking off an orange section at the top of the chest. Select a large square shape from the editor and enlarge it so that it covers the entire chest around the armpit line. Then set it to the same papaya orange colour that we chose for primary colours two and three.

Now we move onto the technical part – arranging our sponsors. Gran Turismo 7 comes with plenty of real life sponsor logos, but a lot are sadly missing. To replace those, we’ll be looking for similar icons situated in the fantasy section. Luckily, the iconic Gulf and Sparco sponsorships are here for us to enjoy. Arrange them all out as seen in the screenshot below.

Another really technical task is creation of the McLaren logo. This isn’t included as a standalone logo, so you’ll have to spell it out using the font icons. Luckily, the font looks fairly similar to the actual logo from a distance. There’s even a similar swoosh shape to place above the final letter if you look in the shapes menu. Ensure that these letters are all the same shade as primary colour number one.

Moving down the chest slightly, we need to create a couple of patches on the pec line. Use the square shape and resize it into a rectangle on the left or right side. You can then use the duplicate function to recreate the shape exactly on the other side. Now place the fantasy sponsors ‘Auto H’ and ‘Maxwell’ on top of each of the patches.

Moving further down, use the square shape option again and scale it into a very thin horizontal line. Arrange two of these above each other to border a sponsor logo. I found that the ‘David Wilson Cars’ logo looks fairly close to the real deal. ‘Unicorn Media’ does a great job of substituting for the logo at the top of the stomach, too.

Now, you’ll need to place the Sparco logo on the other side of the suit, just above each hip. You can then choose which of the two McLaren drivers this suit will belong too. If you’re a Lando Norris fan, spell out ‘LN4’ in the centre, right on top of the zip. Daniel Ricciardo fans will want to spell out ‘DR3’. Make sure the text is white.

Now let’s move onto the arms. I won’t lie, there are barely any of the official race sponsors included here. As such, you’ll need to get a little creative with the ones you use. If you’re a purist, you might want to use only fantasy logos. However, I opted for a mix of real sponsors and fantasy ones.

I found that using the ‘Bilstein’, ‘Dunlop’, ‘Gran Turismo 7’, and ‘Shell’ logos worked well to recreate a similar vibe to the ones included on the official McLaren 2022 race suit. It’s not exact, but we have to make do with what we’ve got! Finish off by placing a ‘Polyphony Digital’ lengthway down the edge of the forearms.

Now we move onto the legs which are, thankfully, very simple. Simply create a large square and size it up to cover most of the leg. Colour it in a delightful pale blue and the race suit will start to look like it’s coming together.

Finally, we need to finish this livery off by placing the driver number on the back of our racer. If you’ve chosen to recreate Lando Norris, you’ll need to select the number 4. For Daniel Ricciardo, choose 3. Make sure it’s the same pale blue colour that you coloured the legs.

And there you have it! You should now have a race suit livery that looks fairly close to the one used by team McLaren in the 2022 F1 season. The next step would be to create a helmet design that fits your favourite driver, but that’s a tutorial for another time.

Did you find this guide helpful? Why not give some of our other Gran Turismo 7 guides a read? We’ve got guides on how to master the Menu Books, as well as a complete list of cars and trophies.