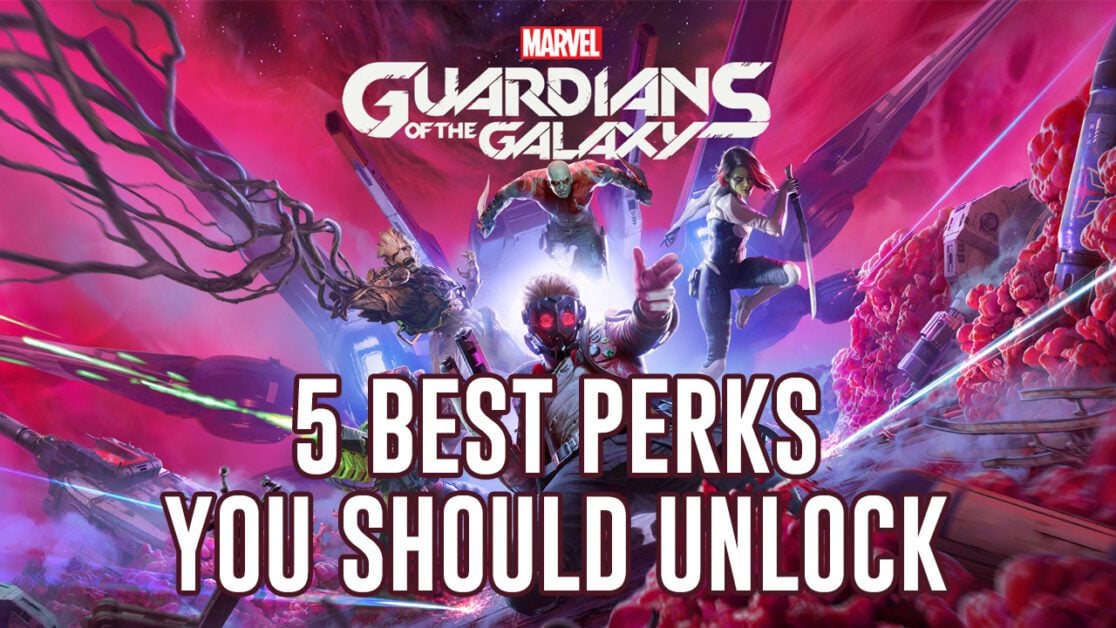 As you find your way through Guardians of the Galaxy‘s first chapter, you’ll eventually find one of Rocket’s workbenches. Identical to that of the Milano, you’ll be able to spend your collected crafting components to unlock new perks for your Peter Quill A.K.A Star-Lord. There are 15 perks altogether, some being more useful than others. Here’s the best 5 perks in Guardians of the Galaxy that you should definitely unlock first.

This one basically lets you know when there’s a bunch of crafting components nearby. Components Localizer even alerts you when you’re not in Visor Mode. Whilst some are easy enough to find, usually by your companions moving the progress-the-story path forward, there are optional paths which lead to collectibles that are also simple enough to identify. Nevertheless, you won’t find them all.

Not unlocking this myself until Chapter 14, I thought I could merely use that explorer’s initiative and find any hidden components myself. It turns out, I could have unlocked the rest of the skills, plus any collectible-and-missable costumes often hidden alongside them, so much sooner. If only I just gave into to a bit of help from some AI assistance.

Air Glide essentially gives you a bit more time in the air, gliding around targets every time you jump and shoot. This one might be a given, because, c’mon jet boots are awesome. However, Air Glide can be easy to overlook, since Peter also has a flying ability in his Squad Mode skillset. Be that as it may, that particular skill has a cooldown time. In the chaos of battle, even having small tid bits of air-time gives you extra manoeuvrability in the chaos of battle. And again, flying is way more fun.

In any game featuring intense real-time combat, the extra layer of insurance that comes with shields or armour is a stress-saving must. As the story in Guardians progresses, the variety of enemies with different weaknesses get bigger and more thought-intensive to overcome. Whilst you’re commanding your time and blasting foes yourself, you’re going to take some hits no matter how careful you are. Especially in boss fights.

Personally, out of the three, I would first unlock Restoration Delay. That way, you’re prevented any more knocks to your vulnerable health points than is necessary. After that, whichever you pick between Extra Shield and Restoration Speed depends on your preference. The main point is that ultimately, you’re sure your shields will keep those pesky blasters off you.