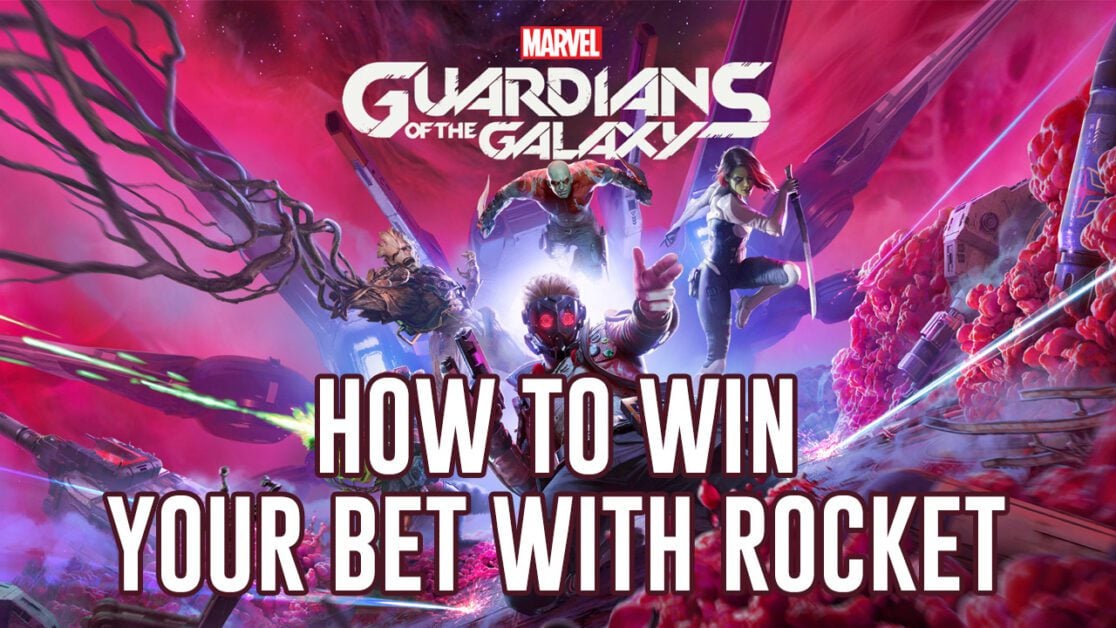 As you play through Marvel’s Guardians of the Galaxy, you might find that there are a few missable trophies or achievements along the way. In the new Square Enix game’s first chapter, the first of those trophies is the politely named “Eat it, Rodent!”. If you hadn’t guessed already, it’s to do with your cocky “definitely not a racoon” team member, Rocket. As Star-Lord, Rocket and Groot traverse through the Nova Corps quarantine zone, you encounter one of many clusters of maggoty, ship-eating parasites. Soon after Rocket challenges you to a who-can-shoot-the-most contest, he integrates your visor with a scoreboard. Because of course he does. Your bet with Rocket commences!

Want to try before you buy? Our premiere of the first 90 minutes of Guardians of the Galaxy’s gameplay includes us winning the bet with Rocket too! The bet starts just after the 32:45 mark.

You’ll need to keep an eye out

Whilst you wander through the rest of the level, you need to be on the lookout for parasites as you go. Rocket won’t take pity if you don’t pay attention, so you can’t take your eyes off the prize. Otherwise, his score will creep up in no time.

That’s where your trusty visor comes in. You’ll have hopefully already gotten used to the visor’s main purpose. Highlighting key environmental objects in yellow, those gross-looking bundles of points are included. Rocket will absolutely guilt trip you every other time you use the visor, but don’t listen. There aren’t any actual consequences that come from using it. Plus, not using the environmental visor mode in your first playthrough would be detrimental to your success.

During the remainder of this part in the chapter. There are numerous nests of these parasites to look out for, a couple of these being massive enough to turn the tide.

After that last cluster, the contest is over. If your score was higher, the trophy or achievement will pop up. Congratulations, you son of a scut!