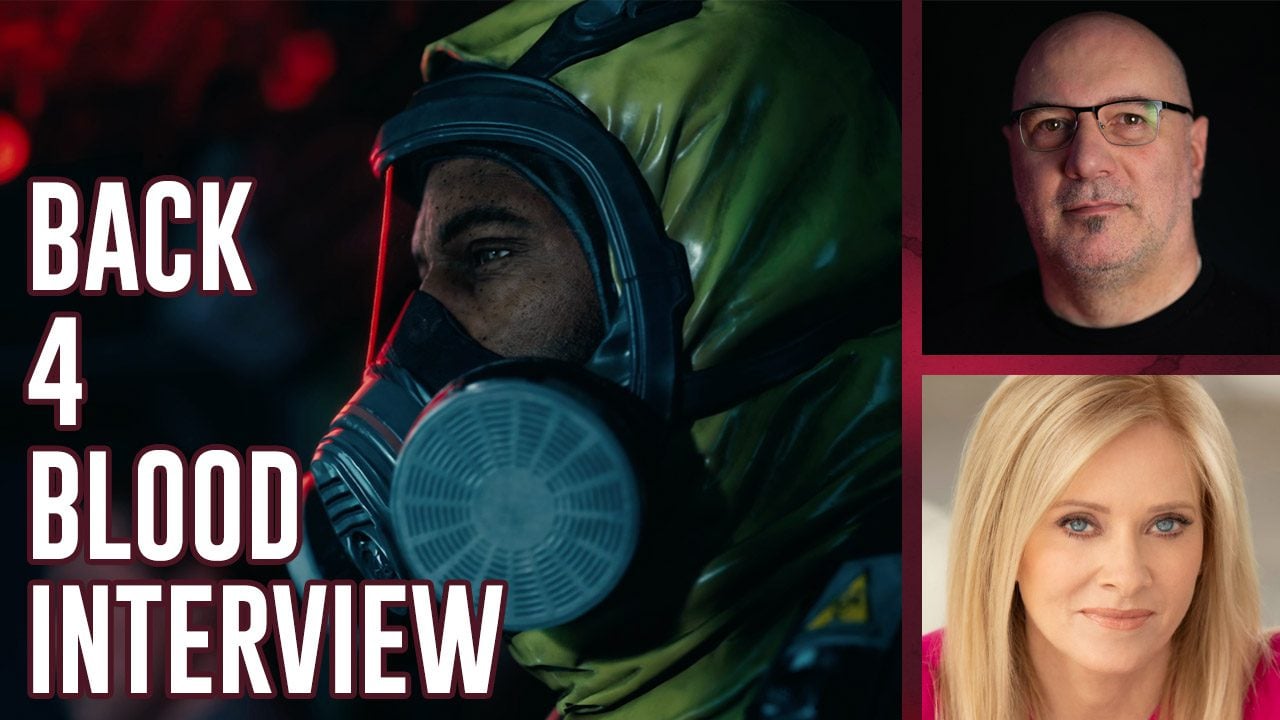 When we spoke with Turtle Rock Studios’ Brandon Yanez last month, he described the tone of Back 4 Blood as ‘Dark action with a lot of levity’. From the new campaign trailer released today, it certainly seems to be sticking with that premise.

Likewise, when we spoke to Narrative Lead Simon MacKenzie, these sentiments were confirmed. ‘The tone of these apocalyptic stories are always where things are grim and everyone’s turning on each other. We wanted to push back on that narrative in a way that says “yeah we’ve gone through some terrible times but we’re gonna step up and take back what’s ours”’.

Although Turtle Rock hopes for Back 4 Blood to become more of a name of its own, the Left 4 Dead comparisons have been noted and discussed ever since the initial announcement of the title back in 2019. It features a group of survivor characters called ‘Cleaners’ versus hordes of undead known as ‘The Ridden’, and also features other familiar systems inspired by Left 4 Dead including the linear paths between safe rooms and AI Director which randomises item and enemy spawns depending on how well you’re doing.

‘We had all the biomes and areas mapped out along with where we wanted the story to flow to,’ MacKenzie spoke about fitting the narrative around the linear A-to-B style levels. ‘We on the narrative team worked hard with the level designers to make sure we could have those appropriate breaks for gameplay.’

Before joining Turtle Rock Studios, MacKenzie had previously worked on open-world titles such as Vampyr and Assassin’s Creed Odyssey. Writing narrative for an open world title is a much different process than writing for a linear title, because you have to consider the order in which players are going to discover content and new story beats. However, MacKenzie says he actually found it harder.

‘The nice thing about open worlds is we can let the player wander off the golden path and discover the smaller side stories on their own. I love those side quests because the writer can go wild on them when they’re not part of the main story and they end up being a lot more fun to write.’

‘With Back 4 Blood, I still wanted to have that same feeling. So we created a system within the game where we use branching dialogues. These conversations can trigger depending on the action and the spacing, so you can still get those little stories about the characters within a linear action game.’

With eight playable Cleaners to take with you on missions, Back 4 Blood’s characters each bring their own personality to the game’s grim world. We also spoke with actress Barbara Crampton, who plays ‘Mom’ in the game, about her involvement with Turtle Rock Studios and her thoughts on video game voice acting.

‘Mom’s an older, Sarah Connor-type character,’ Crampton told us. ‘She’s got some health issues which players will experience in the game so they’ll understand what’s going on with her. She’s also filtering in a lot of what’s happened to her in her past, so she’s quite a tough character.’

Crampton is an actress who has appeared in horror films for nearly 40 years, performing in classic features such as Re-Animator, From Beyond, and You’re Next. Back 4 Blood is her first video game voice-over role, where she didn’t find it too hard to jump from one acting style to another.

‘It’s pretty similar. In voiceover, you’re acting with your voice but you’re still using your body. Even though you’re alone in a small recording booth, the energy of the character has to fill up your whole being and it can’t just come out of your voice.’

‘I had to understand the vernacular that goes into being in a recording booth,’ she added. ‘I’d be in there and they’d say “Give us a grunt or groan! Sound miserable!”. I had to get into the mood of that particular line to sound like it’s coming in the middle of the situation rather than the beginning. That made sense to me as an actor. I got that immediately, but it was so helpful.’

For Crampton, it was very much a case of getting into the zone of working quickly to stay ahead of the big deadlines that come with video game voice acting. Because of how situational character lines in an interactive medium have to be, many actors are required to record the same lines in several ways.

‘I learned that being able to work fast was important. Taking one line and doing it three times in different ways. Then we do three more, and three more after that. It’s very intense work and very specific work, and I really like that. I’d love to do more work like this.’

the inspirations for back 4 blood

Mom is just one of several characters available to play as in Back 4 Blood when it launches later this year. In our preview for the game last month, we wrote that ‘Back 4 Blood doesn’t shy away from referencing the material that inspired it, while it also brings enough new ideas to the table that it’s not just a Left 4 Dead clone.’

And of course, Left 4 Dead is still a big inspiration for it, with it being Turtle Rock’s earlier zombie co-op shooter. But the studio also looked at other references when it came to building the world of the game.

‘There’s obviously a lot of zombie apocalypse fiction out there,‘ MacKenzie tells us. ‘I love the Romero stuff, and also Return of the Living Dead where it’s a bit cheekier. That kind of humour came through into Back 4 Blood.’

‘But we wanted to make it clear that these guys were bad asses fighting back against the hordes. They’re working through it all rather than doing the continual “on the run” kind of stories that you get in zombie movies, TV series and games do. Back 4 Blood is instead like: “we’re going out there, we’re going to find you and we’re going to kick your ass.’

Back 4 Blood launches on October 12th, 2021 for PC, Xbox Series X|S, Xbox One, PlayStation 5, and PlayStation 4. It’ll also be coming to Xbox Game Pass on both console and PC on the same date.