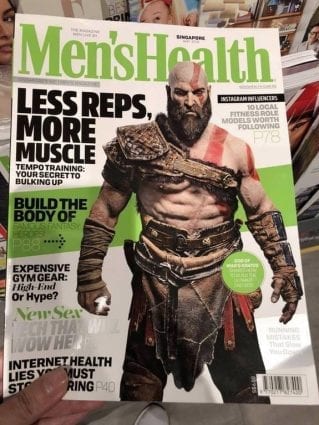 He’s the epitome of body goals…sort of.

Kratos is legitimately THE God of War, and after his game won countless awards (like seriously, have you tried counting them?!) he honestly deserves to be on the front cover of every magazine for the rest of time.

However, I – and most of the world – would expect to see him grace the magazine covers of gaming-related mags, or maybe even entertainment at a push. But Men’s Health? Yeah, it’s a little odd.

Crazily enough, that’s exactly where he was around the time that God of War released last summer. The bulging biceps and powerful stare of Kratos featured on the cover of Men’s Health Singapore in May 2018, accompanied with an article about building a “famous fantasy hero” body [via DualShockers].

Because really, if you could pick one game character to look like, I can’t really see the likes of Kirby or Pikachu winning many votes…

Kratos, however, is literally a god, and after his beautiful story arc in the 2018 God of War, who wouldn’t have him as serious body goals (and goals in general).

An image of the odd edition of Men’s Health magazine was shared to Reddit by user niohdaily who joked: “Men’s Health in Singapore knows its audience well.”

The cover of the magazine features the imposing God of War protagonist posing for the camera, looking as buff, toned and as fierce as ever. Werk it, Kratos.

If you’re an avid collector of gaming memorabilia then you might have to keep your eyes peeled for this special magazine to add to your collection. A quick look on eBay and Amazon yielded no results unfortunately.

If you’re after a copy, maybe try praying to the God of War himself…?