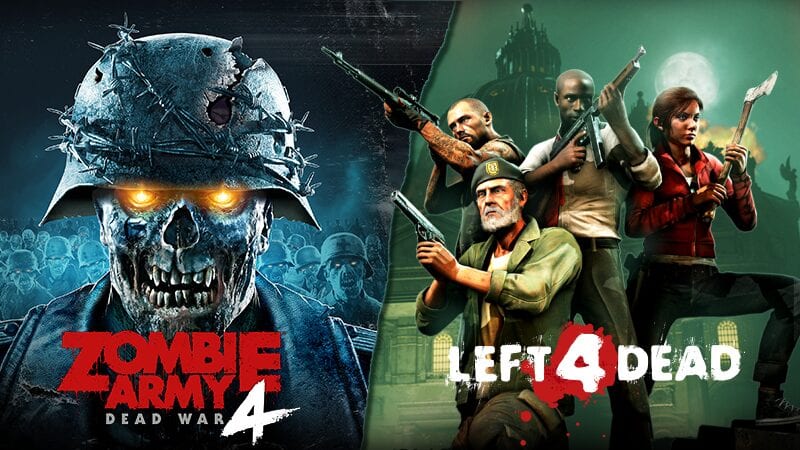 Left 4 Dead is back! However, this time, Bill, Francis, Louis and Zoey are battling it out with the undead hordes of Zombie Army 4.

“Renowned zombie slayers Bill, Francis, Louis and Zoey from the Valve smash hit, Left 4 Dead, are tooled up and ready to take on a new horde as they join ZOMBIE ARMY 4: DEAD WAR as brand new playable characters in the latest free DLC in Season 3 which is available now! In addition to the free characters, Season Pass owners can now visit the spine-chilling Abaddon Asylum in a new campaign mission which is also available as standalone DLC.”

“Abaddon Asylum is the second mission in the ‘Return to Hell’ campaign, following the events of Terminal Error where you uncovered information about the location of Baron Umbra, the mastermind behind the dastardly occult scheme. You will have to fight your way into the Asylum before tracking down Baron Umbra and taking him out once and for all.”

Of course, if you’re unfamiliar with the Zombie Army games, the series is essentially a spin-off of Rebellion’s Sniper Elite. Featuring third-person mechanics and an alternative history narrative, Zombie Army 4 is a must-play for fans of horror shooters and undead carnage alike. Who knows, perhaps this new Left 4 Dead DLC will convince you to give the game a try!

Zombie Army 4’s Season 3 DLC is available now on PlayStation 4, Xbox One, PC and Google Stadia. Thinking of giving the Zombie Army series a go and already played 4? Why not pick up the trilogy via the GameByte shop!