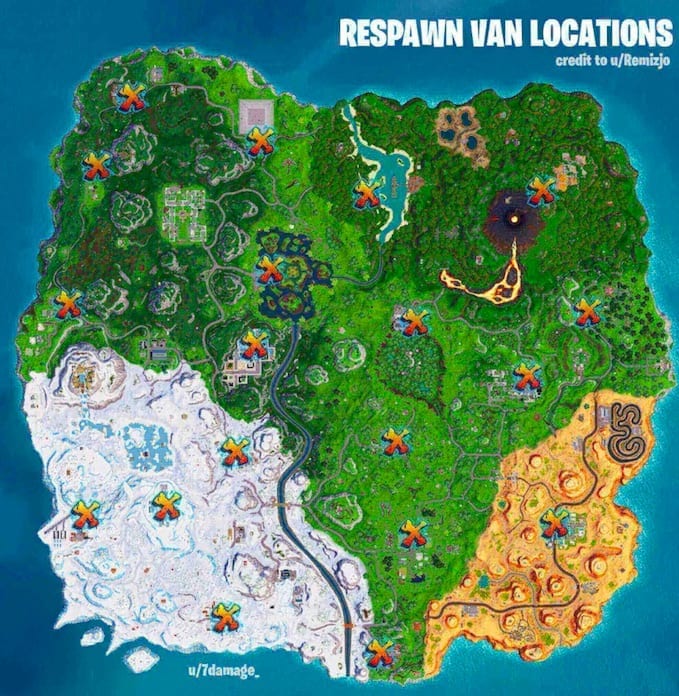 The current season of Fortnite, Season Eight, has brought with it a host of mysterious vehicles that players think are likely to be Respawn Vans.

Right now, if you die in Fortnite then it’s game over for you and you’re back in the lobby if you want to go again, that could be about to change.

Respawn Entertainment’s incredibly popular battle royale, Apex Legends, uses a respawn mechanic that means you can revive your dead teammates to keep being in with a chance of winning the match.

Apex allows you to carry your fallen comrade’s beacon to a respawn point on the map. As long as you do it within the allowed timeframe, your squad won’t be losing any members anytime soon.

Over on Reddit a map of all the van locations has been uploaded. Check it out below. (Note: The user states a van in Pleasant Park is not included in the map).

Right now, the vans don’t actually do anything, and if they are respawn points then Epic Games has yet to confirm when they’ll be useable.

If the mysterious vans appearing in Fortnite really are respawn points, this would be the second Apex feature we’ve seen implemented into Fortnite in just a month.

Fortnite recently added a pinging system into the game to help improve play – and it’s a feature that Apex Legends players have been seriously enjoying since launch.

So wait, #Fortnite copied Lifeline, Respawn beacons, AND the Ping system from #ApexLegends? Is there a better definition of the word “pathetic”? pic.twitter.com/CCx6BeKvxp

What do you think?