We all know that Marvel is particularly secretive when it comes to their movies. Let’s be honest, did anyone really see that coming in the last Avengers?! I don’t feel too good just thinking about it.

So it does seem slightly odd that they appear to have let the name of the next Avengers movie slip. Well, when we say ‘they’ we don’t mean officially. It actually seems to have been leaked by a long-standing member of the crew.

The movie’s cinematographer, Trent Opaloch (who has worked with Marvel for literally YEARS), seems to have completely messed up by putting the title ‘Avengers: End Game’ on a list of credits on his website. That seems like a bit of a rookie error, doesn’t it?

GameSpot reports that he served as Director of Photography on several Marvel movies, including Captain America: Civil War and Avengers: Infinity War. The credit has now been changed to Avengers 4, but this is the internet. We have screenshots. 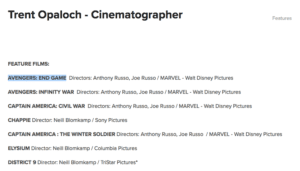 And it’s now been changed to this… 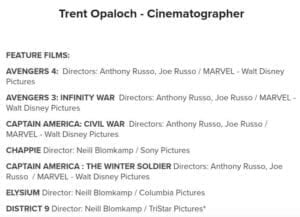 You may be thinking that the term “end game” sounds a little bit familiar. Well, it actually appears in Infinity War. Doctor Strange tells Iron Man: “We’re in the end game now.”

However co-director Joe Russo previously said that the title will not be a line of dialogue from Infinity War. Could it be a double bluff? Or maybe they haven’t actually decided on the name yet, and Opaloch was just using a stand-in title that the cast and crew have been using temporarily? Who knows. And, either way, Marvel hasn’t commented on the story.

They’re going to have to tell us the title soon enough, as the sequel to the $2 billion dollar hit is set for release on May 3, 2019. And we really can’t wait. How likely is it to be End Game? Put your bets on now.