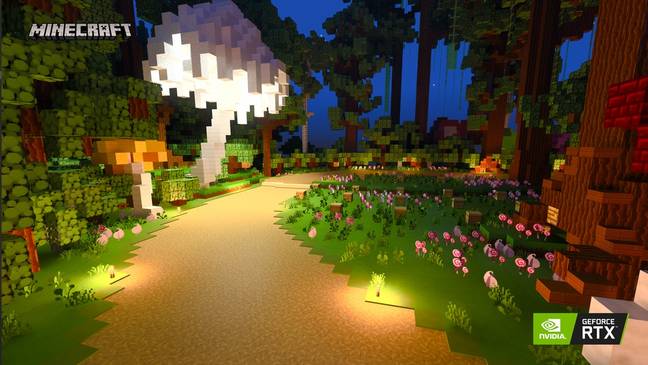 You can now experience a whole new Minecraft thanks to NVIDIA, and the game has never looked as amazing as this. Last year, tech giant NVIDIA announced plans to bring real-time ray tracing to what’s arguably the world’s most popular game, and that time has now come.

As of April 16, you’ll be able to dive into six unbelievably cool-looking Minecraft worlds, each created to showcase the power of ray tracing, courtesy of NVIDIA.

The worlds include a cyberpunk-themed city, a huge theme park and an underwater kingdom. Each new world features an incredible amount of detail, colour and style, all boosted by unbelievable lighting, textures and shadows.

Ray tracing is one of the biggest selling points of the next generation of console gaming, and it’s something the upcoming PlayStation 5 and Xbox Series X are very invested in. Once you experience a game that utilises it, you’ll never want to turn back.

As NVIDIA puts it: “Realistic hard and soft shadows are seen everywhere; global illumination realistically lights the world, with that light filling interiors through windows and gaps in the terrain; illuminated blocks and other light sources cast pixel-perfect lighting; reflections are seen on all reflective surfaces and blocks, with a level of fidelity far surpassing that of screen space reflections; light reflects, refracts and scatters through water, ice, stained glass, and other transparencies; and atmospheric effects occur naturally, resulting in high quality volumetric fog, and pixel-perfect god rays.”

There’s even the opportunity to upload your own builds to the beta to see how they fare with ray tracing enabled.

Check out the trailer below to see more of the RTX beta in action!

Although the RTX Beta is now live, there’s no word on when we can expect a full release.