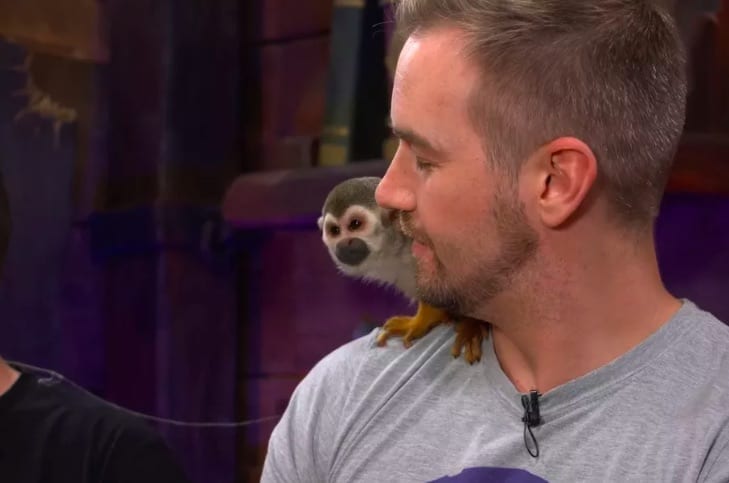 As the old adage goes: never work with children or animals. And as the even older adage goes: monkey see, monkey do, monkey puke all over you.

If only Rare paid more attention the team probably could have avoided the shenanigans that took place during a Sea of Thieves livestream, where a monkey did a sick on one of the team.

Sea of Thieves’ Community Video Manager, Jon McFarlane, was joined for the recent livestream by Antonio the squirrel monkey and his handler, Barbara (the monkey’s handler, not McFarlane’s), to welcome the game’s Pirate Emporium update.

In some of the best comic timing in all of mankind, Rare executive producer Joe Neate commended Antonio for his good behaviour – only for the monkey to puke all over McFarlane.

Not only did McFarlane’s shirt get a splattering, but so did his face. It was all in good humour though, until the monkey hopped to McFarlane’s other shoulder to repeat the process.

Thankfully, McFarlane took the whole thing in good faith, because really you can’t blame such a cute lil guy for having a bit of stage fright…or maybe the issue was sea (of thieves) sickness?

“I’ve never had regurgitated mealworm on me before, and it was a great choice to wear a grey t-shirt,” Jon laughed as he tried to clean himself up using a napkin.

The iconic moment has now been memorialised forever in a gif, thanks to the Sea of Thieves Twitter account.

What's the saying? Never work with children or animals?…

We'd do it again. #Antonio pic.twitter.com/WSgZDxnor4

I guess Antonio isn’t really a fan of Sea of Thieves?

Find out more about Sea of Thieves and its next update, Pirate Emporium, in the video below.