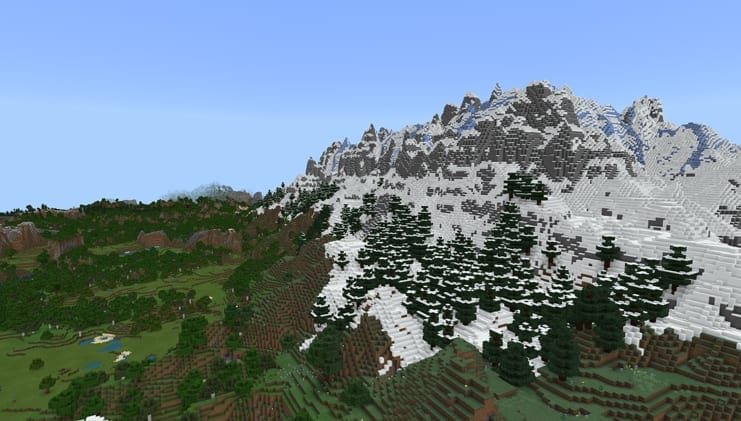 The latest Minecraft Beta for Xbox, Windows 10, and Android has debuted new mountain heights ahead of the Caves & Cliffs update later this year. What does this mean? Well, it means Minecraft mountains are now taller than ever before!

Despite the Caves & Cliffs update not arriving until later in the year, some of its features are available as of right now, depending on which version of the game you’re playing.

So far if you’ve been playing Minecraft on Windows 10 Edition, you would have experienced some Goats, whereas the Java Edition has gifted players with new caves to explore and even Glow Squids!

Now, a new batch of content and features has arrived ahead of the full Caves & Cliffs launch, available for the game’s Bedrock Edition.

On the official Minecraft website, Mojang writes: “Pack your inventory with rations and a solid pair of leather boots because there’s a new landform to explore in the latest version of our Bedrock Beta: cooler, taller mountains. That’s right, mountains are now exactly 271% more majestic, but also 184% more dangerous. Not only can you fall from greater heights, but you still have to watch out for powder snow and goats!“

As for the mountains’ height, Mojang states that the altitude of the world has been increased from 256 blocks to 320 blocks.

The update will also make the usual reported bugs and fixes that need to be made to the ever-evolving world of Minecraft. You can check out the full patch notes here.

To access the latest content in Minecraft Beta on the Bedrock Edition, just select a new world, then select “Experiments” and toggle-on “Caves and Cliffs” and you should be good to go.

Have you been enjoying the new features of Minecraft? Let us know across our social media channels.

The full Minecraft Caves and Cliffs update is expected to release sometime this coming summer.