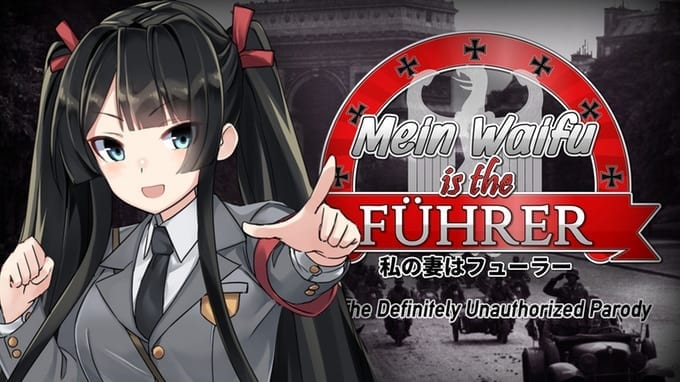 The – quite frankly – very weird game, tells the story of what happens when the German high command is turned into anime characters on the eve of World War 2, oh and there’s five waifus for you to woo.

Coming from a small team known as DEVGRU-P Corporation, the fully-funded Mein Waifu is the Fuhrer is likely to be coming to a PC near you very soon.

The game’s official description reads: “Erwin Rommel just got the assignment of his life, leading the invasion of Poland in operation Polandfeldzug. Unfortunately his world is turned upside down when a plot to overthrow the German government led by Oberstleutnant Claus von Stauffenberg results in the death of the entire German high command. Undeterred, Rommel returns to Berlin to prevent civil war only to find that the Führer, along with the rest of the high command, is not dead, only… changed into anime characters.

“Instead of leading a simple invasion of Poland, Rommel is stuck trying to prevent the world from descending into utter chaos as the Anime-Führer runs Germany into the ground at every turn, blundering at everything from military strategy to diplomacy.

“Make friends (mostly enemies) at the most pivotal moments in history, from the Battle of Stalingrad to the Invasion of Normandy. With five potential Waifus, you’re guaranteed to have fun on multiple playthroughs as you try to prevent the inevitable shenanigans that ensue.”

I’m weirdly intrigued by the concept, and I can definitely think of a few YouTubers who won’t be able to pass on a Let’s Play of this…

Check out everything you need to know about Mein Waifu is the Fuhrer over on Kickstarter.

DOOM Eternal Is Getting A Horde Mode. Multiplayer Mode Cancelled

Netflix Now Has Mobile Games On Its Platform In Poland

Russia Is Banning Death Note Over Fear Of Copycat Crimes

Oh Look, Here’s A Trailer For The Shenmue Anime Series

Netflix Launches ‘The Netflix Of Games’ With A Bunch Of Exclusives