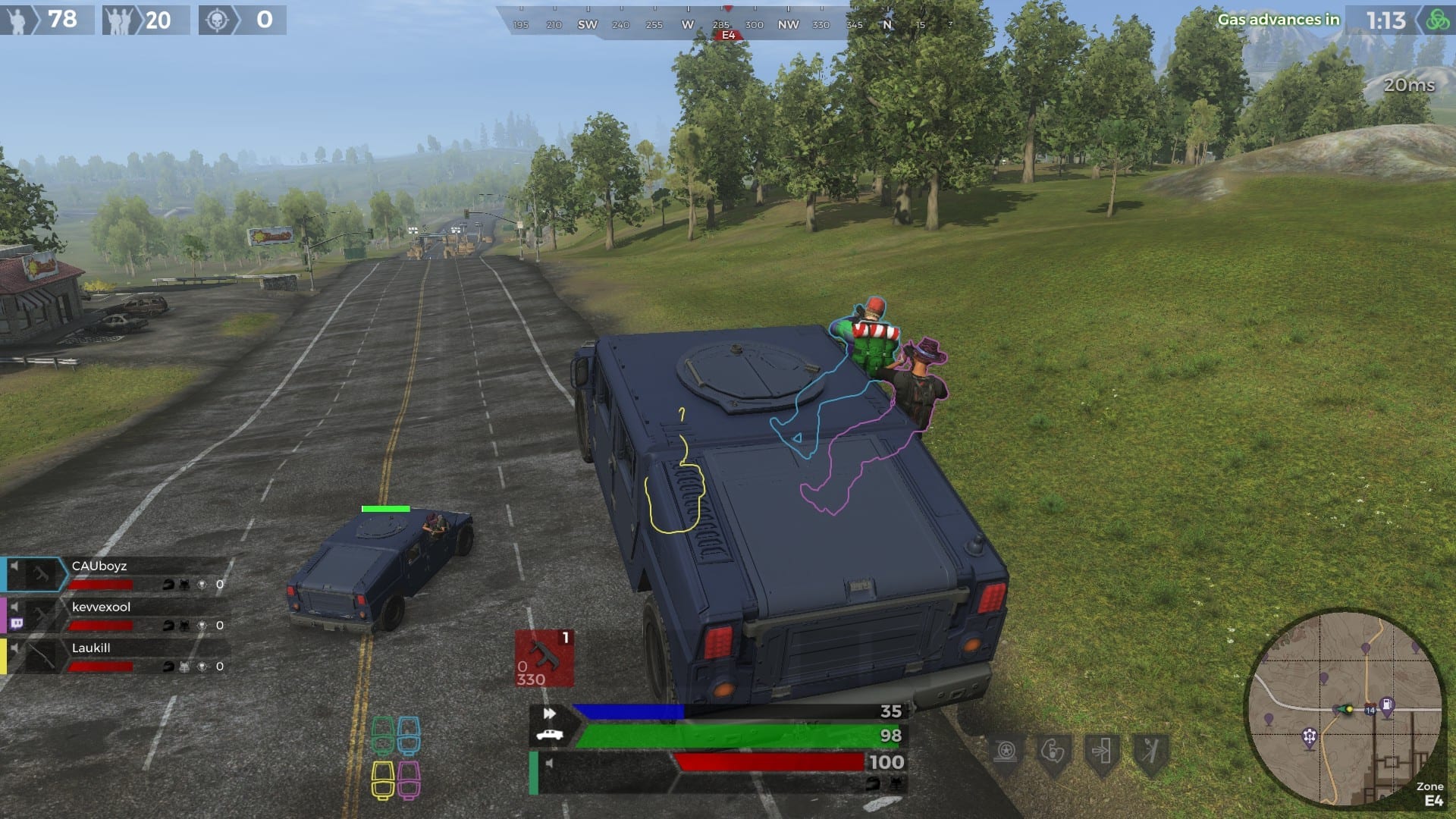 To fight back at the ever-increasing popularity of Fortnite and Playerunknown’s Battlegrounds, H1Z1 has come out of early access and with it comes the brand new car-only Auto Royale mode.

In Auto Royale, players are forced to fight each other in weaponized vehicles. The overall experience somewhat reminds me of Carmageddon and Mad Max, and despite all of the criticism it’s getting, I think it’s worth trying out.

Here’s everything you need to know about H1Z1’s new Auto Royale mode below.

How To Play The New H1Z1 Auto Royale Mode 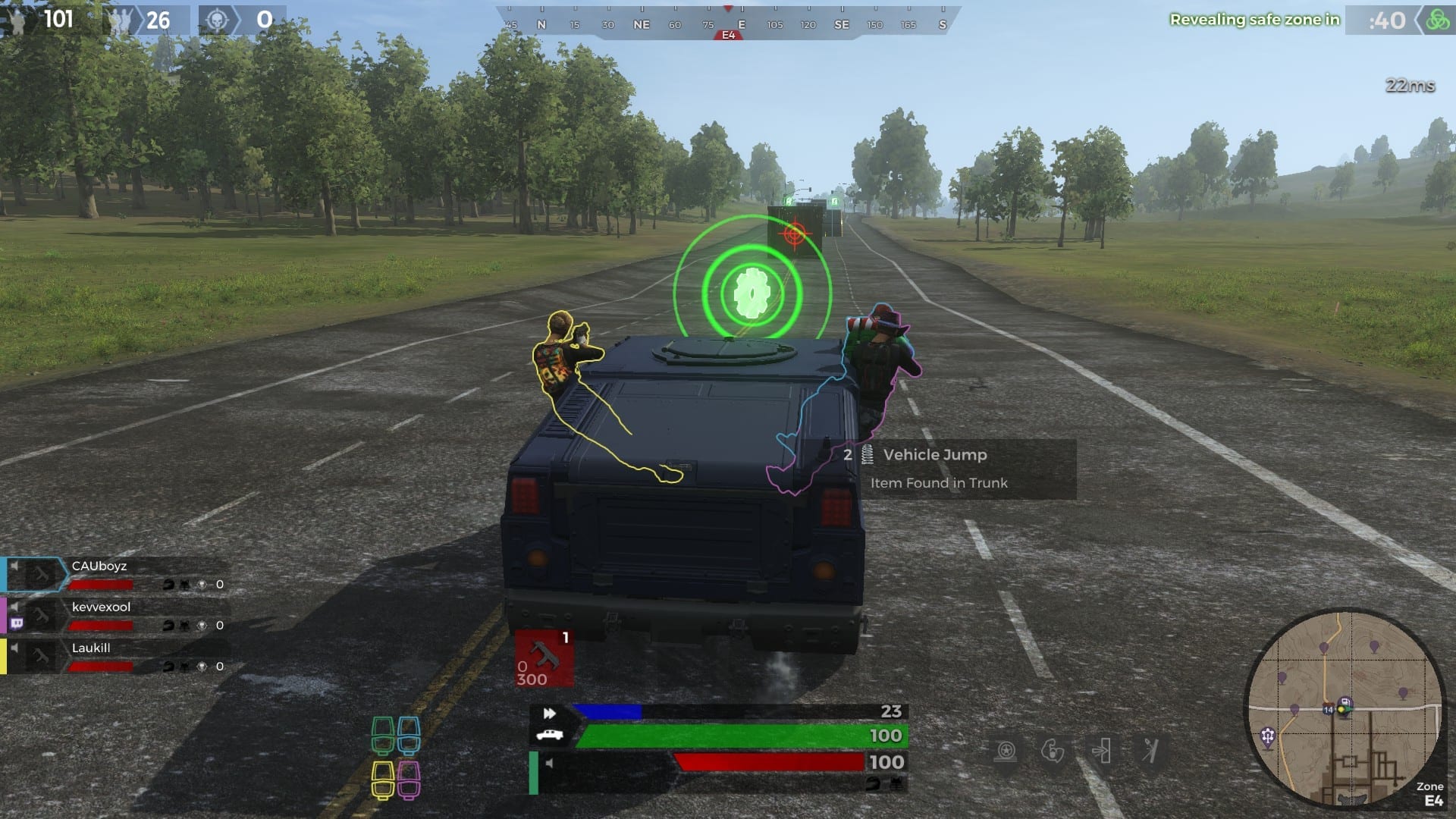 Playing the new H1Z1 Auto Royale mode is quite straightforward. All you need to do is download the latest update for H1Z1 and then jump into the game.

Once you’re on the main menu, all you need to do is click the ‘Auto Royale (beta)’ button.

From there, you’ll be able to jump right into the carnage.

The rules for H1Z1 Auto Royale will depend on whether you’re matched as the driver of the vehicle or the passenger. You’ll be matched with three other players, and will be automatically assigned the driver role or one of the three passenger roles.

Here’s a rundown of how each role plays out.

Drive over power-ups to obtain items
Avoid toxic gas, traps, and other obstacles
Use high octane, jump, or other items
Avoid being hit while repairs are active
Press Ctrl+U to get unstuck
Fuel is unlimited in Auto Royal but turbo isn’t – you must get more power-ups to increase your turbo

Shoot enemy vehicles, their passengers, and power-up containers
Lean out of the window with right mouse button to use your weapons
You take less damage when you stop leaning out of the window
You can use medkits and bandages to keep yourself from being knocked out
You must share items from the team inventory within the vehicle

There is still a moving gas ring that will slowly reduce the available play area
If you get ‘knocked out’, you’ll be temporarily incapacitated. After 10 seconds, you’ll automatically be brought back to life with 25% health
To beat another team, you must destroy the vehicle itself with weapons and traps
Whilst you’re assigned different roles, you can use Ctrl+G to offer to swap out your seat with another player. 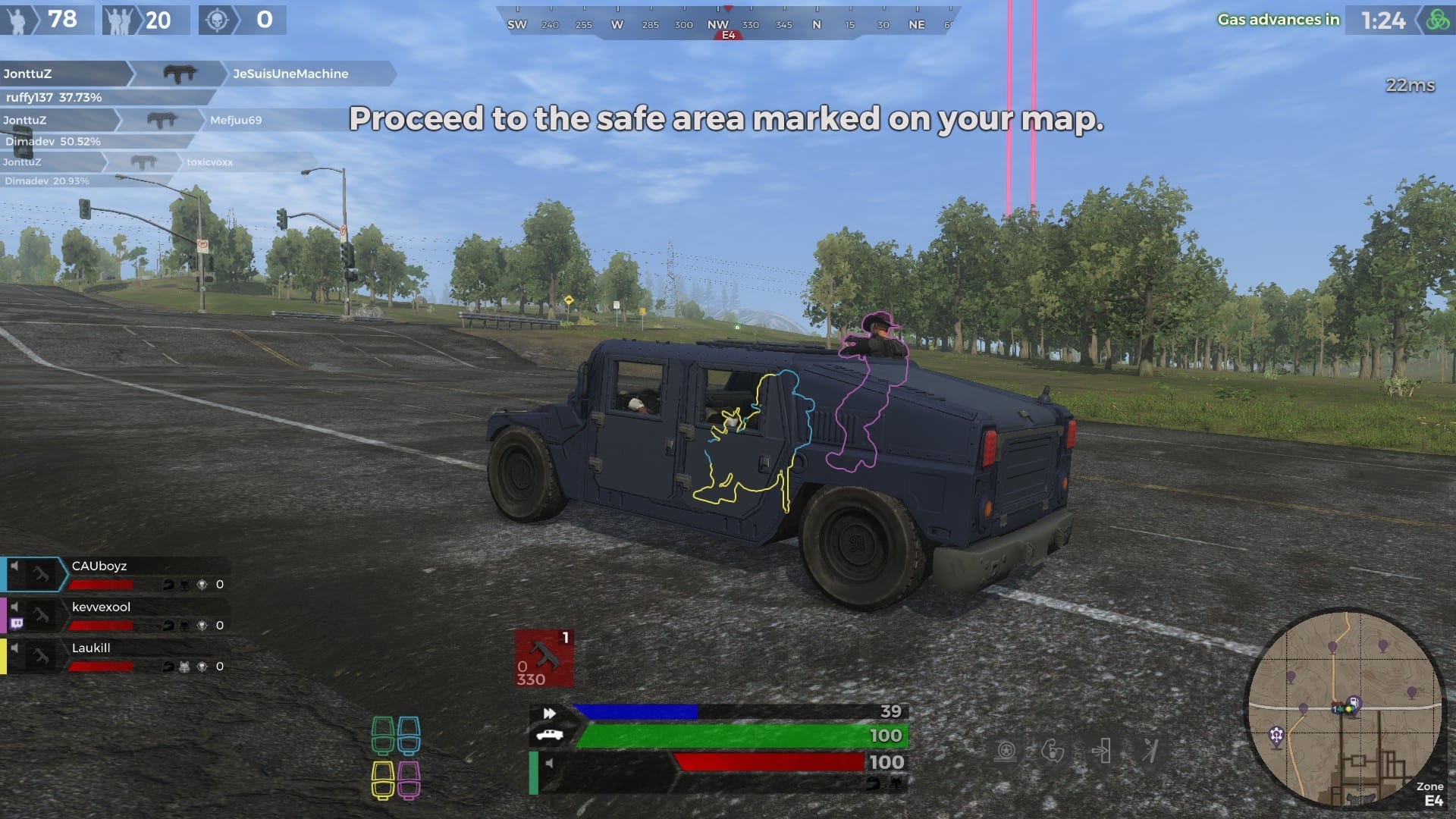 A lot of the core gameplay for H1Z1 Auto Royale will revolve around the driver picking up different traps and power-ups located on the map.

All of the power-ups are graded by rarity – rarer power-ups are essentially more powerful versions. The rarity level goes from common, uncommon, rare, and ultra rare.

The colors for these rarities are green for common, blue for uncommon, purple for rare, and yellow for ultra rare.

I’ve listed the different available power-ups and traps and how they can be used below.

With the landmine, the driver can choose to place down a single landmine behind them as they drive. This can be good for destroying vehicles that are chasing you down.

The oil slick trap can also be ejected out the back of the vehicle – any vehicle that drives over it will lose control of their vehicle’s steering temporarily.

This power-up essentially tops up your turbo fuel gauge.

With the vehicle jump power-up, you’ll be able to initiate springs to make your car jump into the air.

Repair Kits are used to increase the health of your vehicle – they’re very useful for staying in the battle for longer.

Fire Extinguishers can be used to put out fires on your vehicle. If the fires continue to burn, your vehicle will lose health over time.

There are a variety of weapon drops that can give the vehicle passengers access to more powerful weapons.

Finally, there are a number of passive power-ups that can affect the stats of your vehicle. One such power-up will improve the height of the jump ability, whilst others will increase your vehicle durability or speed.

Some power-ups add additional features to your vehicle. Amphibious, for example, can make it so your vehicle can drive through water. Juggernaut can make your vehicle able to deal head-on collision damage to other vehicles. Bullet Proof Glass and Resistant Glass can reduce the amount of damage the vehicle and passengers take when the vehicle is shot at. 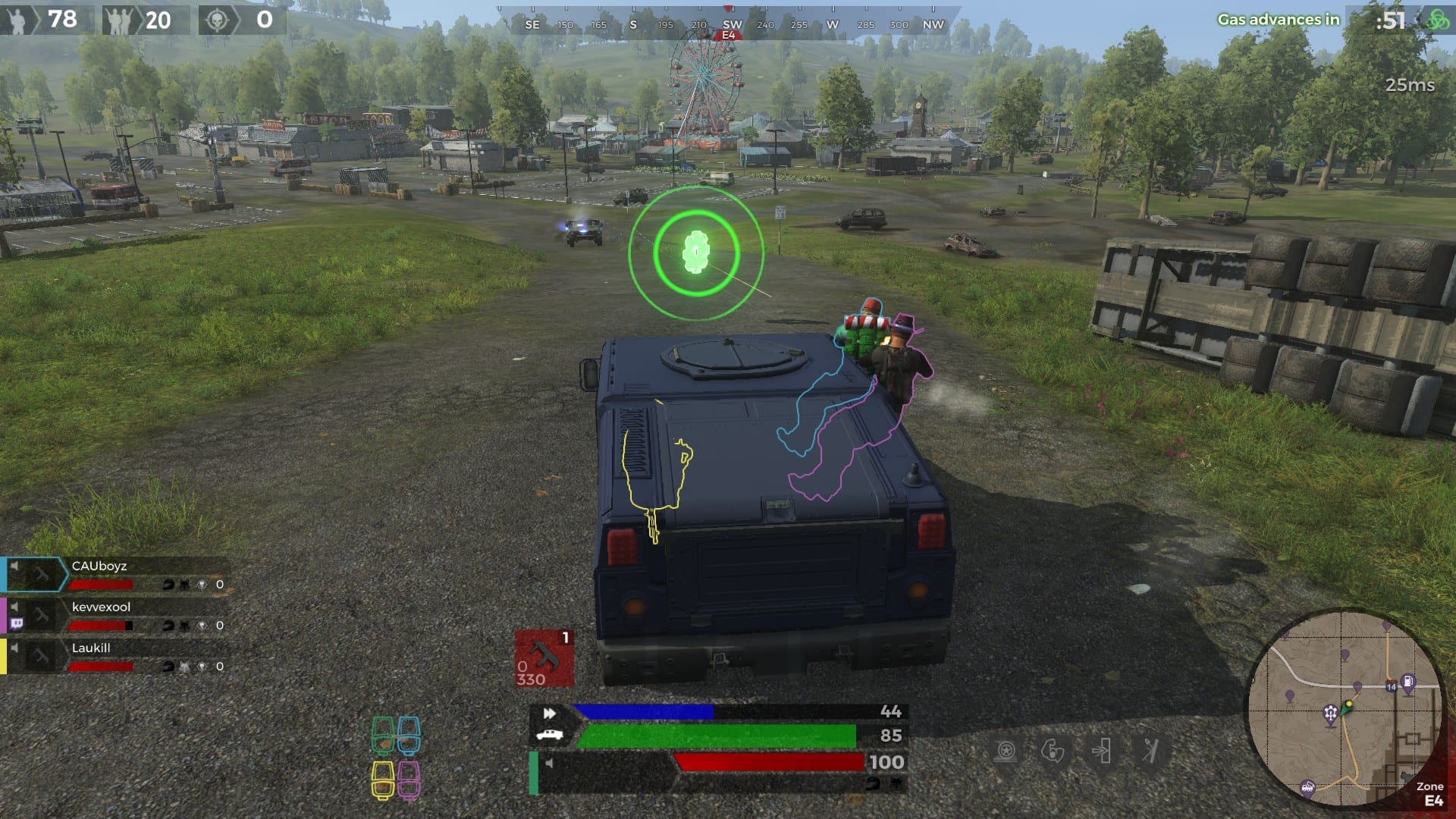 There’s not much strategy involved. Instead, the game has been designed with a core focus on fun gameplay mechanics and wacky powerups.

As soon as you jump into H1Z1 Auto Royale, you’ll be thrown into the action. The driver will need to drive around looking for power-ups. Along the way, the passengers will be able to shoot at other cars in the area.

Later on in the game, you’ll be driving circles around other vehicles in an attempt to destroy them before they destroy you.

If you’re playing on your own, it can be an uncoordinated mess playing H1Z1 Auto Royale.

It’s alright if you’re the driver because you’re essentially given control over where to go and what to do. If you’re a passenger, however, you’re pretty much at the mercy of the driver.

Play with a group of friends and H1Z1 Auto Royale becomes a far better experience. You can communicate with your teammates and plan out where to go and what to do.

Passengers can work together alongside the driver to set down smartly placed traps and to keep the vehicle in healthy condition.

In summary, if you’ve already got H1Z1, I’d suggest installing it again because this game will give you and your friends a good few hours of fun. It’s certainly not the game mode that should make you buy H1Z1 for the first time, however.

Gameplay in H1Z1 Auto Royale is ultimately a little shallow and there’s only so far you can with it before gameplay becomes repetitive. Unfortunately, that same heart-stopping action that happens in normal Battle Royale modes doesn’t transfer across to Auto Royale.