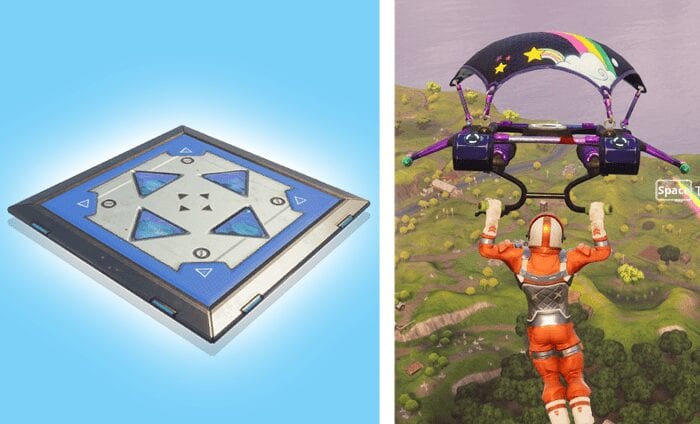 There’s two kinds of gamers: those who love Fortnite and those who despise it with every fibre of their being. I assume that you are the former as you’ve clicked on this article. In that case, good for you. It’s easy to be swept up into a mob mentality idea of a game’s reputation. At the end of the day, if you enjoy playing it and have a laugh – what’s the harm?

So for all you Fortnite fans, here’s some good news. ‘The Bouncer’ is being introduced. For those of you who are veteran Fortnite gamers, it’s not quite the directional bounce pad that used to be featured in the game, but was removed after season one.

As far as we know, The Bouncer is going to give the player big, aerial boost in whichever direction they choose. How do we know? Well, it’s kind of obvious from the marking on the pad itself. Plus, the description in the game’s newsfeed reads: “Place this pad for a big bounce boost – no fall damage!”

You may be wondering how it’s different to the game’s current Jump Pad.

As the description states, there’ll be no fall damage. So you won’t have to use a glider to slow down your fall. Handy.

It looks as though The Bouncer will be a ‘rare’ item, rather than ‘epic’, and will be found as Floor Loot, in Vending Machines, Supply Llamas or within Chests. So the likelihood is that a lot of people will get their hands on it.

Well, I don’t know about you but we’re very excited about the prospect of this in-game feature dropping soon. Apparently, it could be with us as soon as Tuesday (June 5). But we’re pretty sure that the YouTube streaming community will let us know before we even figure it ourselves.