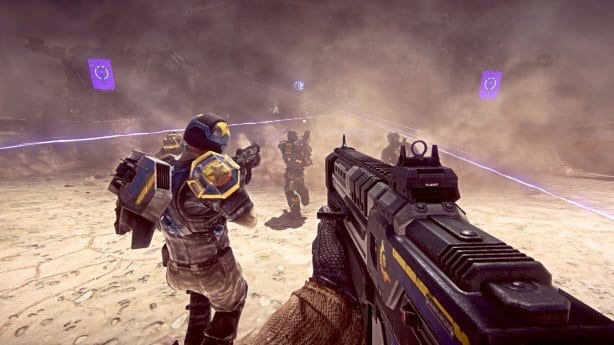 The new-to-Early-Access battle royale game, PlanetSide Arena, is just a stepping stone on the path to a third instalment in its franchise, said Daybreak Game Company.

Writing over on the PlanetSide 2 website, the games’ executive producer Andy Sites said PlanetSide Arena is meant to be a link between the second PlanetSide and the third – confirming that yes, PlanetSide 3 is coming.

Sites said the third game will expand the current battlefields available “to full-fledged galactic war with empires exploring, colonising and conquering one another within an expansive galaxy.”

Unfortunately, we don’t know when it’ll be playable, but hey, at least we have Arena for now.

Launching just last month on Steam Early Access, PlanetSide Arena’s official description reads as follows: “Dive into PlanetSide Arena and battle online in this massive multiplayer sci-fi arena shooter. Choose your class, fuel your jetpack, and drop into the fray on the war-torn landscape of Auraxis. If you want to come out on top, you’ll have to go all in to rule the Arena.”

Writing about its Early Access state, the company says: “We want you to join us on our epic journey to shape the future of the PlanetSide franchise. With PlanetSide Arena, we’ll be releasing modes that will have hundreds of people battling in a single match and we need your help to play these new massive modes and help us find out what works and what needs to be adjusted.”

It’s not been an easy road for PlanetSide developers as of late. Speaking of recent layoffs within Daybreak, Sites said: “As we take our next steps on this journey, I can tell you that the team and I are 100 per cent committed for the long haul as we continue to expand PlanetSide 2, refine PlanetSide Arena, and prepare for the future of the overall PlanetSide franchise.”